The purpose of lava flow prediction

"This model is part of a larger international project called VolcanBox. VolcanBox is a powerful toolbox designed to analyse volcanic hazards and inform responses, whether that be long-term planning or the response to an imminent hazard."

It has been used to simulate potential lava flows in the event of a volcanic eruption on Reykjanes peninsula, which has been a seismically active region for some time, and has seen constant earthquakes for the last three weeks. The most intense seismic activity has been between Keilir and Fagradalsfjall and, naturally, people are alarmed about earthquakes in this area. On Reykjanes peninsula there are many towns, harbours, industrial structures, popular tourist destinations and major roads, as well as the largest airport in the country that guarantees air traffic to and from Iceland. And the capital itself is not far away.

"The project behind the simulation model has been an international collaboration over the past six years between scientists and civil protection departments in the participating countries," says Ármann Höskuldsson, scientist and research professor at the UI Institute of Earth Sciences. Besides Ármann and Þorvaldur, the team behind the model includes Ingibjörg Jónsdóttir, senior lecturer in geography, William Michael Moreland, postdoctoral researcher at the University of Iceland, Muhamad Aufaristama, postdoctoral researcher at the University of Twente, the PhD students Catherine Gallagher and Helga Kristín Torfadóttir, and the former Master's student Þóra Björg Andrésdóttir.

Ármann and Þorvaldur explain that scientists from Spain, Italy, France and Portugal have also been involved in developing the model.

"The model's analysis is based on the geology and volcanic history of the region we are researching, so that a long-term hazard assessment is generated from statistical data on specific locations," says Ármann.

Þorvaldur says that when there is an imminent hazard, as is now the case on Reykjanes peninsula, all new data which earth scientists believe is directly related to the current unrest is imported to the model. A short-term forecast is generated by calculating the most likely locations of a volcanic eruption, based on the long-term assessment in addition to current data from the hazard zone.

"This creates a new map which shows the likelihood of potential eruptions at specific locations, which we call eruption susceptibility. The purpose of this short-term forecast is to predict the most likely sites of an eruption and the most likely lava flows, if there is a volcanic eruption within the probable areas. It is important to have this information because it tells us which areas could potentially be at risk from lava flow in the event of an eruption, when the exact location of the eruption is unknown. The model also gives us an idea of the potential length of the lava flow."

The Volcanology and Natural Hazard Group at the University of Iceland has posted its findings on their Facebook page. This image is from 13 March. "The purpose of this short-term forecast is to predict the most likely sites of an eruption and the most likely lava flows, if there is a volcanic eruption within the probable areas. It is important to have this information because it tells us which areas could potentially be at risk from lava flow in the event of an eruption, when the exact location of the eruption is unknown. The model also gives us an idea of the potential length of the lava flow." 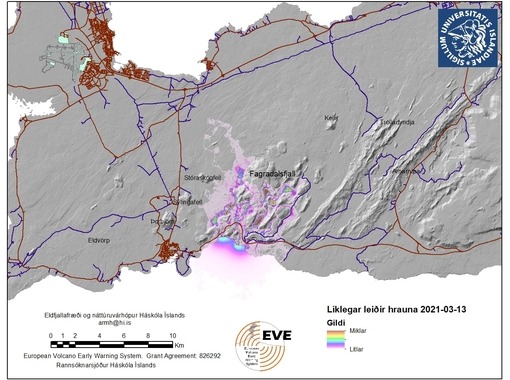 What data does the model use?

Many people are curious to know exactly what kind of data the scientists import to the model used for the hazard zone on Reykjanes peninsula and how that data is handled. Þorvaldur and Ármann explain that, firstly, they import all known information on the geology and volcanic history of Reykjanes peninsula. This data is categorised by type and age and the significance of the data is determined by domestic and international experts. "This is the basis of a long-term eruption susceptibility analysis," says Ármann.

Þorvaldur explains that then, when an eruption seems imminent as is now the case, they import data on the location of earthquakes and their nature. The model also allows the import of further data, such as crustal deformation and gas emissions. The model uses all this data to generate a short-term eruption susceptibility analysis.

The model then predicts an effusive eruption within the areas defined as susceptible. Lastly, says Ármann, the most likely lava flows from these areas are calculated. "Calculations are based on the typical physical properties of basalt lava and historical eruptions on Reykjanes peninsula."

The strengths and weaknesses of the model

Simulation models can never be completely accurate, but they are often used for scientific purposes and to help tackle a wide range of sociological situations. For example, models are used to assess glacial retreat and to predict climate change. One of the most discussed models in Iceland has been the University of Iceland prediction model for COVID-19 in Iceland. It seems to have been extremely successful. But how much faith can we put in the results of this simulation model?

"Here we are assessing potential eruption sites and lava flows," says Þorvaldur. "The goal is to characterise the lava flows. Reliability is based on selected physical properties for the lava. We are not aiming to predict the final outcome of a specific volcanic eruption. The goal is to be ahead of the game so we are best prepared to respond to an event if it becomes a reality."

"The caveats are that eruption susceptibility does not tell us the exact location of a volcanic fissure, merely a likely area. The lava flow model tells us how the lava is likely to flow, but not its thickness or final distribution."

The goal of eruption predictions

When asked whether human input is required, some kind of review of the model's predictions before they are published, both scientists say no. "You can analyse and interpret the results, but you can't influence the statistical processing."

Ármann and Þorvaldur believe that knowledge will continue to advance to the point where it will be possible to predict eruptions and lava flows quite accurately.

"That is what our research is aiming at. In this context, it is worth pointing out that it took meteorologists almost 250 years to develop reliable weather forecasts," says Ármann. 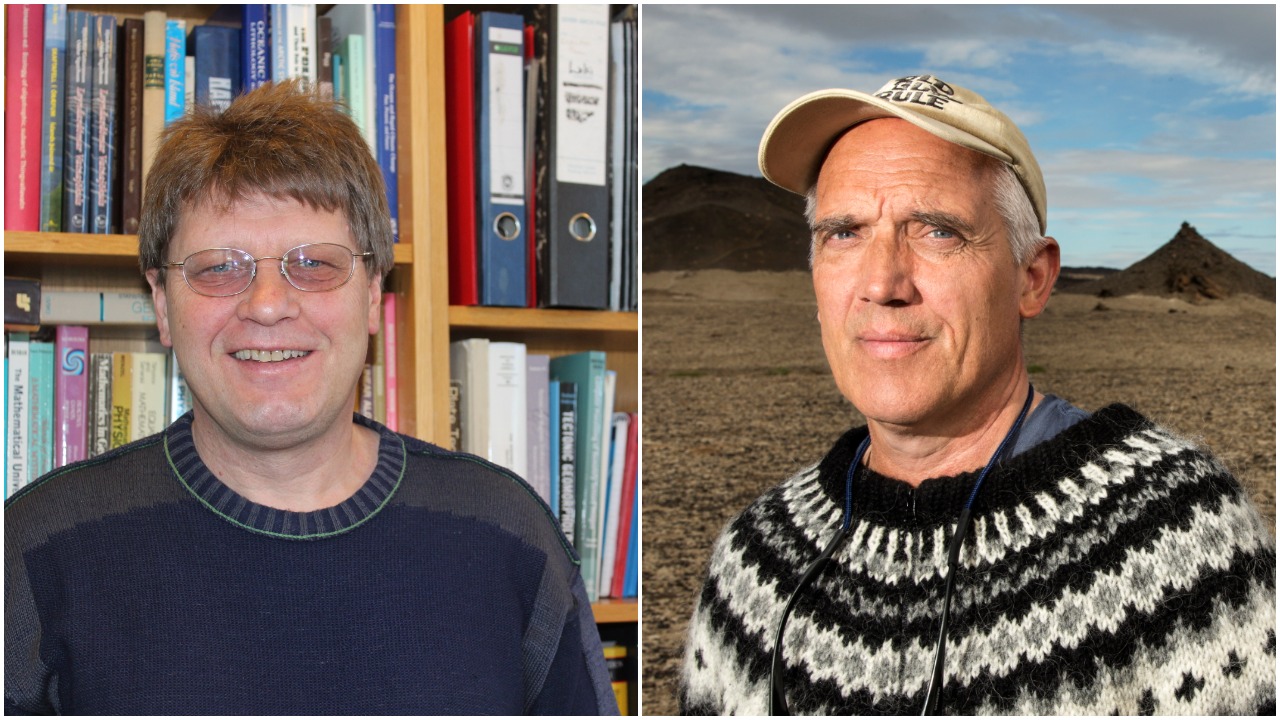