When Branislav Bédi was a university student in his home town in Nitra in Slovakia in the early years of the 21st century, he first heard of the Poetic Edda, which sparked a passion for the Icelandic language. Now, around 15 years later, he has a doctorate in second language studies from the University of Iceland and has devoted himself to spreading the Icelandic language across the world, for example with the help of computer technology. Indeed, this was the main topic of his doctoral thesis.

Branislav recently became the first student to complete a PhD in second language studies from the University of Iceland Faculty of Languages and Cultures. He has lived in Iceland in recent years and first came to the country in 2006.

"Before I came to Iceland, I had studied German and English at Constantine the Philosopher University in Nitra, which is a very well-known teacher training college in my home country. My interest in Icelandic began when I first heard of the Poetic Edda in a course I took on German literature. There was a lot about Iceland and Snorri Sturluson in the course. We also read a German translation of the Poetic Edda and the Niflungasaga," he says.

A year later, Branislav came across an advertisement for a grant to take a BA in Icelandic, provided to foreign students by the Icelandic government, and decided to apply. "It was an indescribable feeling when I got the letter from Iceland informing me I had been awarded a grant. I had the chance to make my dream come true," he says.

Branislav completed a BA in Icelandic as a second language in 2009, before returning to Slovakia. "After two years in my home country, I decided to go back to Iceland on a permanent basis. At that point I had also completed a Master's degree in English and German. I wanted to find a doctoral programme where I could use my knowledge of general linguistics and write about how people learn second languages," says Branislav.

A doctoral programme designed specially for me

Branislav's doctoral thesis in second language studies was about computer-assisted language learning, involving artificial intelligence and language analysis. The thesis was linked to the development of a computer game called 'Virtual Reykjavík'. "The aim of the project was to create a 3D computer game with embodied conversational agents, supporting the practical teaching of Icelandic language and culture with a particular focus on practising oral language skills. I chose this project because I thought it was exciting and original and fit in perfectly with my goals – to improve my knowledge of teaching Icelandic as a second language with the help of computers," says Branislav, who immersed himself in computer science and computer game design to get a better understanding of the relationship between languages and computers.

When designing a virtual reality environment, there is a lot to think about and Branislav's role in the project was to research verbal and non-verbal features in so-called clarification requests among Icelanders.

"The project involved recording real-life conversations between people in downtown Reykjavík. The conversations were filmed and transcribed. I also looked at the way people behaved in the conversations and described the way they spoke, i.e. what verbal and non-verbal features they used to communicate with others. This was done in order to design realistic and varied behaviour for the embodied conversational agents, thereby improving the learning experience for students using the computer game. I concentrated on clarification requests, which I described in my thesis, but the project also involved designing learning materials for the game and having students test the game," says Branislav, who completed his thesis under the supervision of Birna Arnbjörnsdóttir, professor of second language studies at the University of Iceland, and Hannes Högni Vilhjálmsson, professor at Reykjavík University.

Branislav at his doctoral defence in the University of Iceland Aula last December. "The project involved collecting real-life conversations between people in downtown Reykjavík. The conversations were filmed and transcribed. I also looked at the way people behaved in the conversations and described the way they spoke, i.e. what verbal and non-verbal features they used to communicate with others. This was done in order to design realistic and varied behaviour for the embodied conversational agents, thereby improving the learning experience for students using the computer game." IMAGE / Gunnar Sverrisson 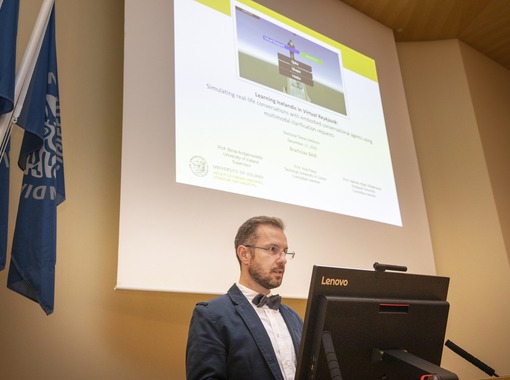 Supporting the spread of Icelandic

Branislav says that he is incredibly pleased with the results of the project. "When I started to analyse the data, it looked as though I would 'only' manage to describe everything we already know. But in fact, I identified one new example that nobody else had previously identified in spoken language: the 'freeze look' that people have when they don't hear or understand what someone else has said. This happens in real-life face-to-face conversations. I suggested 6 multimodal clarification request models, which should promote a more realistic human-agent interaction in the computer game and the 'freeze look' was one of them. The embodied conversational agents can use one of 6 different clarification requests when they don't understand what the student has said to them. And this creates additional opportunities for students to practise oral language skills by repeating themselves without disrupting the conversation," explains Branislav. He adds that the development of the computer game has not progressed as quickly as hoped over the last few years, in part due to lack of funding.

Alongside finishing his PhD, Branislav has worked as a project manager at the Árni Magnússon Institute for Icelandic Studies, where he works on various exciting projects, for example promoting opportunities for people who are interested in the Icelandic language to follow their dreams and come to Iceland to learn Icelandic. "I oversee Icelandic instructors at universities abroad, grants for people studying Icelandic as a second language at the BA level, and shorter international Icelandic courses. I also work on projects supporting computer-assisted teaching of Icelandic as a second language," he says, and of course his PhD is very useful there. 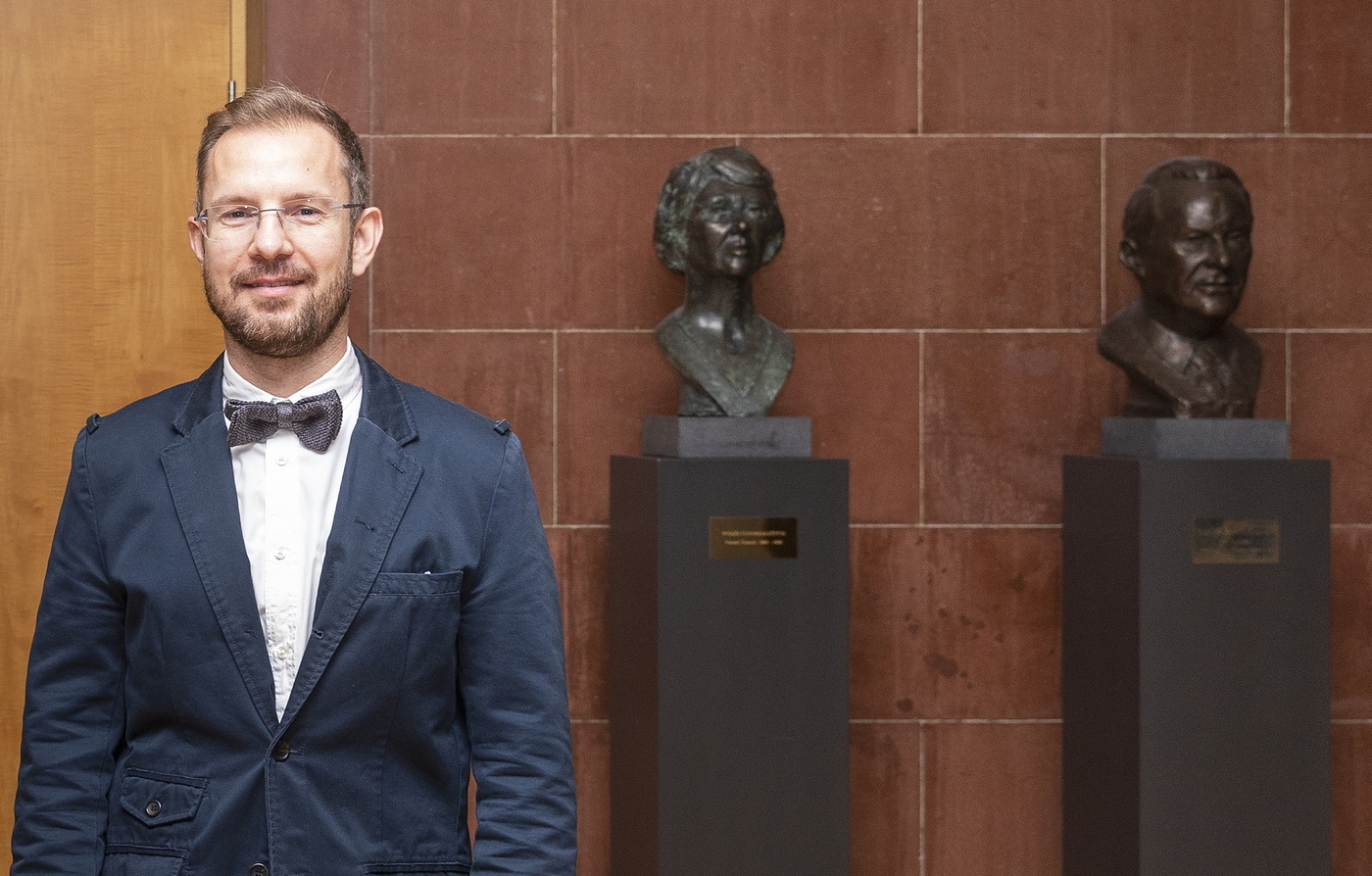