The European research project Sound of Vision, led by Icelandic research scientists, received first prize in its category, “Tech for Society”, at the Innovation Radar Prize 2018, which was handed out in Vienna yesterday.

The project Sound of Vision has been ongoing for three years and was awarded close to €4 million from Horizon 2020; the biggest EU Research and Innovation programme in 2015. The aim of “Sound of Vision” is to facilitate blind and visually impaired people to sense their environment. The equipment includes a sensory belt that is placed around the user's waist perceiving information from the environment and the user receives this information via audio models inspired by natural phenomena like liquid sounds and image-like haptic projections. The belt is, furthermore, useful to those who are temporarily deprived of their usual senses. This may apply to employees in various situations such as smoke diving or surveillance in great noise. This equipment has been developed in close collaboration with blind and visually impaired people in Iceland.

The project manager is Rúnar Unnþórsson, professor at the University of Iceland's Faculty of Industrial Engineering, Mechanical Engineering and Computer Science. His collaborators are Árni Kristjánsson, professor at the Faculty of Psychology, a group of post-doctoral fellows, doctoral students, and research scientists within the University, Icelandic National Institute For The Blind, Visually Impaired and Deafblind (NIB), as well as engineers from universities and institutes in four other European countries, Romania, Italy, Poland, and Hungary.

Thousands of projects that have received financial support from Horizon 2020 - the biggest EU Research and Innovation programme -were considered for the competition of which the evaluation committee nominated 50 finalists in five categories. Sound of Vision was one of 10 project nominated in the category "Tech for Society 2018". This prize category aims to recognise new technologies impacting society and citizens, developed in EU-funded research and innovation projects. The general public could then vote for the best projects in each category via electronic voting on the European Commission's website until 12 November. Sound of Vision landed in third place in its category out of the four finalists in each category that presented their project before a jury in Vienna this week.

Rúnar Unnþórsson and collaborators competed against scientists of 19 other innovation projects when pitching the idea behind Sound of vision to a jury composed of a panel of experts. Winners were announced in each of the five categories as well as the 2018 Innovation Radar Prize in the competition. Sound of Vision won first prize in the category “Tech for Society.”

The 2018 Innovation Radar Prize was awarded to the Swiss company Gr3n or their breakthrough technology for ‘upcycling’ PET / polyester. They have developed an industrial-grade prototype that uses microwave radiation to increase the proportion of plastics that can be recycled while also increasing the quality of recycled plastics (such as PET or polyester).

This prize will no doubt facilitate future development of the equipment and a growth company is in the making around the idea with a view to marketing the equipment for general use.
It is possible to see how the equipment works in a video produced by the research team.

The University of Iceland congratulates everyone included in Sound of Vision on their success. 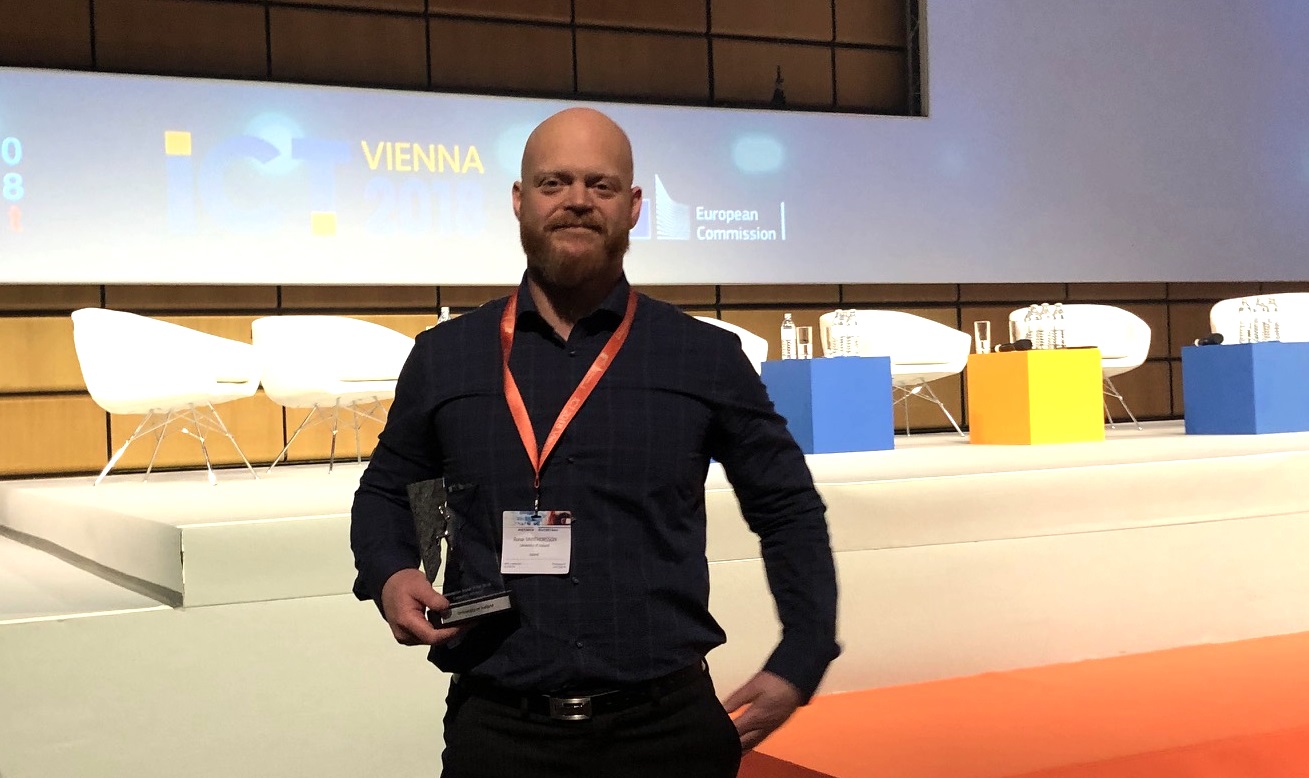