Serious concern over the Icelandic skills of bilingual preschool children

New research by three scientists at the University of Iceland suggests that bilingual children who speak Icelandic as a second language acquire limited Icelandic in preschool. The main findings of the study are concerning, showing that bilingual children demonstrate much lower proficiency in Icelandic compared to the average proficiency of their monolingual peers in all observations. The scientists say that the gap proved much wider than could have been predicted based on comparable research in larger linguistic communities. They say that their findings are extremely serious and should prompt a change of attitude towards linguistic exposure for bilingual preschool children. Action must be taken to strengthen the Icelandic skills of bilingual and multilingual children in Iceland.

The scientists behind the study are Jóhanna T. Einarsdóttir, professor of speech pathology at the UI Faculty of Medicine and the School of Education; Iris Edda Nowenstein, MS in speech pathology from UI and PhD student in Icelandic linguistics; and Hjördís Hafsteinsdóttir, speech and language therapist, who have recently published a paper on the results of their research in the journal Netla. They found that up to 97% of monolingual children were more proficient in Icelandic than their bilingual peers.

"Thanks to earlier research conducted in Iceland, we know that language development at the end of preschool is predictive of performance in compulsory school. We also know that the number of multilingual children in preschools and compulsory school is rising, but that far fewer children in this group graduate from upper secondary school," says Jóhanna T. Einarsdóttir.

"Our results indicate that action is needed to ensure that all children have equal access to education, regardless of origin. We are calling for a change of attitude and for measures to strengthen the Icelandic skills of bilingual and multilingual children in Iceland. We want their interests to be better protected and their access to education guaranteed."

Hjördís, whose Master's thesis in speech pathology at UI forms the basis of the study, agrees. It was her own experiences of working in preschools with multilingual children that inspired her choice of thesis topic.
"This is a small study which would need to be repeated across the country, but our findings actually contradict the prevailing belief that preschool children are always quick to pick up a new language in a new linguistic community," says Iris Edda.

Jóhanna explains that this study shows that the Icelandic skills of bilingual children are worse than previously believed.

"The subjects of our study measured far below the standards of their monolingual peers, despite having been born in Iceland and attended Icelandic preschool for a long time. The gap between monolingual children and children who speak Icelandic as a second language was actually much wider than we could have expected, based on comparable research in other countries," says Jóhanna.

She adds that previous studies in Iceland have given some indication that this could be the case, but the development of the MELB standardised language development test has allowed scientists to accurately measure a child's proficiency in Icelandic.

The scientists behind the study are Jóhanna T. Einarsdóttir, professor of speech pathology at the UI Faculty of Medicine and the School of Education; Iris Edda Nowenstein, MS in speech pathology from UI and PhD student in Icelandic linguistics; and Hjördís Hafsteinsdóttir, speech and language therapist, who have recently published a paper on the results of their research in the journal Netla. They found that up to 97% of monolingual children were more proficient in Icelandic than their bilingual peers. 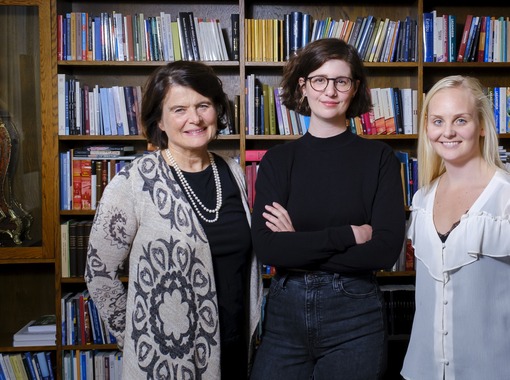 The goal of the research was twofold, says Hjördís Hafsteinsdóttir. "Firstly, to assess the Icelandic proficiency of bilingual preschool children using thorough measurements of their linguistic skills and comparing those results with the average skills of monolingual peers. Secondly, to compare the results of the language development tests with samples of spontaneous speech."

Hjördís explains that the study looked at a cohort of 25 bilingual preschool children in Suðurnes aged 5-6 and in their final year of preschool. The children were all born in Iceland and had attended an Icelandic preschool for several years. Both parents had the same first language and that was the language spoken in the children's homes. This meant that the children did not speak Icelandic at home, Hjördís explains.

"The children had attended an Icelandic preschool generally for around 8 hours a day, 5 days a week for between 3 and 4 years. Their Icelandic skills were assessed using different evaluation tools, both standardised language development tests and less formal observations. The main findings were that the bilingual children demonstrated significantly lower ability in Icelandic compared to the average ability of their monolingual peers in all observations that we conducted. In the standardised Icelandic language development test, MELB, the children were on average between 2 and 3 standard deviations below the average ability of monolingual peers and demonstrated much lower proficiency in sections that focused on vocabulary and grammar. They performed best in sections that focused on phonology, where their ability was at the low end of average. In a vocabulary test called Ísl-PPVT-4, the average performance of the bilingual children was over 4 standard deviations lower than the average performance of monolingual peers. Samples of spontaneous speech showed that the bilingual children expressed themselves using significantly shorter sentences on average, used significantly fewer words and a less varied vocabulary, and made significantly more errors compared to monolingual peers. There was a correlation between the proportional number of errors in the language samples and the results of the language development tests," says Hjördís.

These findings are extremely significant for Icelandic society

"We know that preschool staff care a great deal about the interests of bilingual and multilingual children," says Jóhanna. "The serious problems facing these children after they have spent the majority of their waking hours in the Icelandic preschool environment are extremely concerning. According to the UN Declaration of Human Rights, the freedom to hold and express opinions is a basic human right, which depends on achieving the linguistic skills needed to put your thoughts into words and communicate with others."

Jóhanna says that the results of the study are so serious that 23 of the 25 children would meet the criteria to be diagnosed with a developmental language disorder.