How do women appear in folktales?

The PhD student, Dagrún Ósk Jónsdóttir, is very invested in all that is mysterious, weird, or even horrible. The thread of her research subjects in folkloristics has reflected this and she has even studied cannibalism in Icelandic folktales.

However, she is currently studying the manifestations of women in Icelandic folktale collected in the 19th and 20th century.  Dagrún Ósk has great interest in floklores and what the can tell us about the society they are set in.  "The stories give us a certain insight into the lives and ideology of the people who told them. As I am also interested in gender studies this looked like an exciting project to tackle."

Focus on women in Icelandic folktales

In a few Icelandic folktales featuring women the subject includes conflicts that we are familiar with, even from our times. Helga Kress, professor emerita at the Faculty of Icelandic and Comparative Cultural Studies, has pointed out that these include subjects such as forbidden love, betrayal, servitude, domestic violence, forced marriages, and even rebellion among women.

"My focus is on women who rebel against prevailing ideas of femininity of the time the stories were collected and the consequences," says Dagrún Ósk about this interesting project. "I have been studying stories of women doing men's jobs, who renounce motherhood, supernatural women such as giantesses and fairies and gender-based violence against the heroines."

Dagrún Ósk says that the study is actually the offspring of a show she did in the summer of 2018 and was called the eerie name: "Giantesses that eat men: cannibalism and feminism." She based the show on her BA thesis on cannibalism in Icelandic folktales.

I approached the cannibalism from a gender perspective in the show and wanted to do more researches that integrate the two factors; folkloristics and gender studies."

"I have been studying stories of women doing men's jobs, who renounce motherhood, supernatural women such as giantesses and fairies and gender-based violence against the heroines," says Dagrún Ósk Jónsdóttir, PhD student in folkloristics. image/Kristinn Ingvarsson 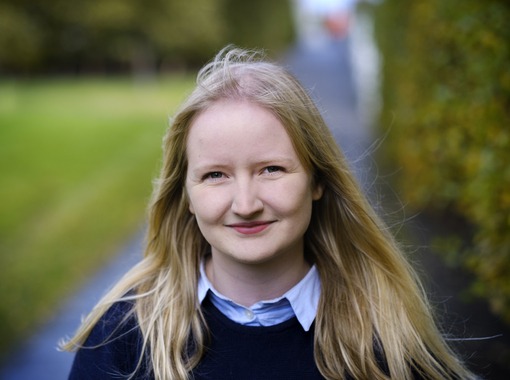 Dagrún Ósk says there are indications of various exciting results from the study. "What I find interesting is how many of the ideas presented in the stories are still very much alive today. It is also interesting to see how the stories create and maintain certain ideas on gender roles."

She says that the project's value for folkloristics lies first and foremost in new ways to study Icelandic floktales, especially in the interdisciplinary approach she applies. "As for society I hope that my study will shed new light on how pre-determined ideas about the genders has been maintained through the ages and provide new tools in the fight for equality."

Terry Gunnell, professor in folkloristics is Dagrún Ósk's supervisor in the study.