Discovered the toughest material in the natural world while researching spiders

"It's a great misconception that spiders are dangerous or troublesome at all. They get rid of all kinds of pests for us," says Ingi Agnarsson, lecturer in zoology at the University of Iceland. Ingi has around 30 years of experience researching these eight-legged creatures all over the world and has discovered a huge number of new species. He also researches spider silk and discovered the toughest and most elastic material in the natural world – the silk of the Darwin's bark spider, which he and his colleague named in honour of Charles Darwin 150 years after the publication of his famous work On the Origin of Species. New research by Ingi and his colleagues, examining the genome of the species, suggests that the toughness and elasticity of the silk is related to its unique protein combination.Ingi began work at the UI Faculty of Life and Environmental Sciences earlier this year after almost 25 years living and working abroad, most recently as an associate professor at the University of Vermont. Biology has been part of his life from as early as he can remember. "I was born with a burning passion for biology and I was 5 when I decided and declared that I was going to be a biologist, either an expert in a museum or a professor! I never looked back and I've been lucky enough to know all my life exactly what I wanted to do. It might be in my genes, because my father, grandfather and great-grandfather were all biologists," says Ingi, whose father, Agnar Ingólfsson, and grandfather, Ingólfur Davíðsson, both worked at UI. "Astonishingly, my brother Torfi missed out on the biology genes," smiles Ingi.

Studied the sociality of spiders for his PhD

Ingi completed a BS in biology from the University of Iceland in 1995 and worked at the Icelandic Institute of Natural History before moving to the US to pursue graduate studies at George Washington University and the Smithsonian Institute, where he completed his doctorate in 2004. "I studied taxonomy, analysing the evolutionary relationships and naming of organisms. This discipline is about biodiversity on our planet, the discovery and description of new species and understanding how organisms are connected in the tree of life," says Ingi. 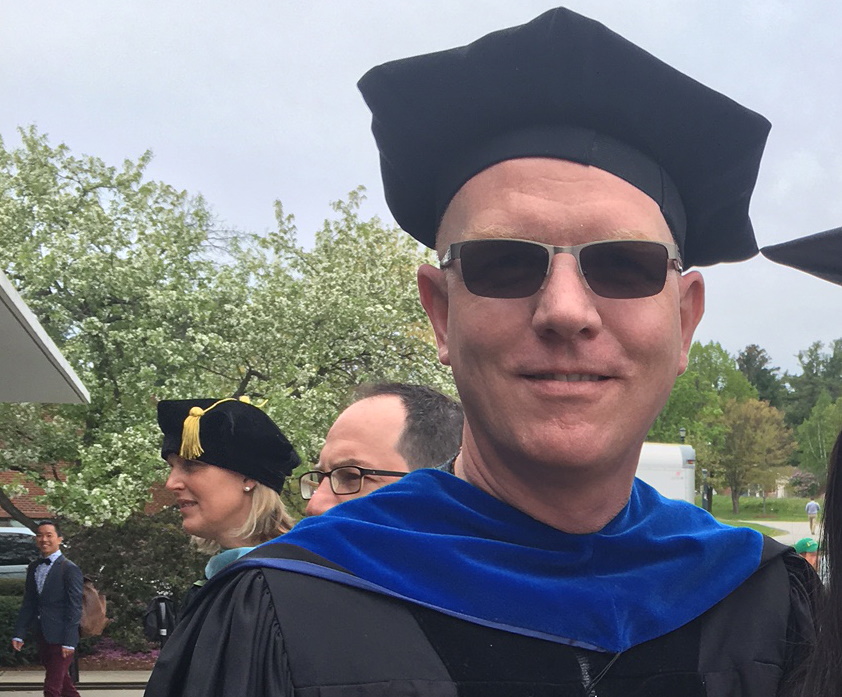 Ingi did his graduate studies at George Washington University and Smithsonian-institute, from which he completed is doctoral degree in 2004.

Ingi's PhD was about the taxonomy of one of the largest families of spiders, the tangle-web spiders (Theridiidae), focusing on the evolution of sociality. A lot of people probably associate spiders with aggression and fierce behaviour rather than sociality. "I demonstrated that sociality has evolved repeatedly in spiders, but social spiders seem to end up in an 'evolutionary dead end', i.e. social species do evolve but quickly go extinct, seemingly due to inbreeding caused by the sociality," explains Ingi.

Ingi's interest in arachnids was first piqued not during his PhD, but during his earlier work at the Icelandic Institute of Natural History, before he moved to America for graduate studies. "I was working with the entomologist Erling Ólafsson and he assigned me the task of identifying spiders and trying to understand their distribution and diversity in Iceland," says Ingi. The results of that work were published in Fjölrit Náttúrufræðistofnunar 1996.

Discovered a huge number of species

Ingi has explored a very wide range of topics in his research, but the connecting theme is his passion for understanding the biodiversity of spiders on our planet. "I have travelled all over the world and discovered a huge number of new species, described many of them and been involved with evolutionary and ecological research aimed at building a better understanding of the evolution of diversity over hundreds of millions of years as well as analysing current biodiversity," explains Ingi, who has worked and conducted research in Madagascar, South Africa, Puerto Rico, Slovenia, Canada, French Guiana, and the US. He also holds a position at Hubei University in Wuhan in China. 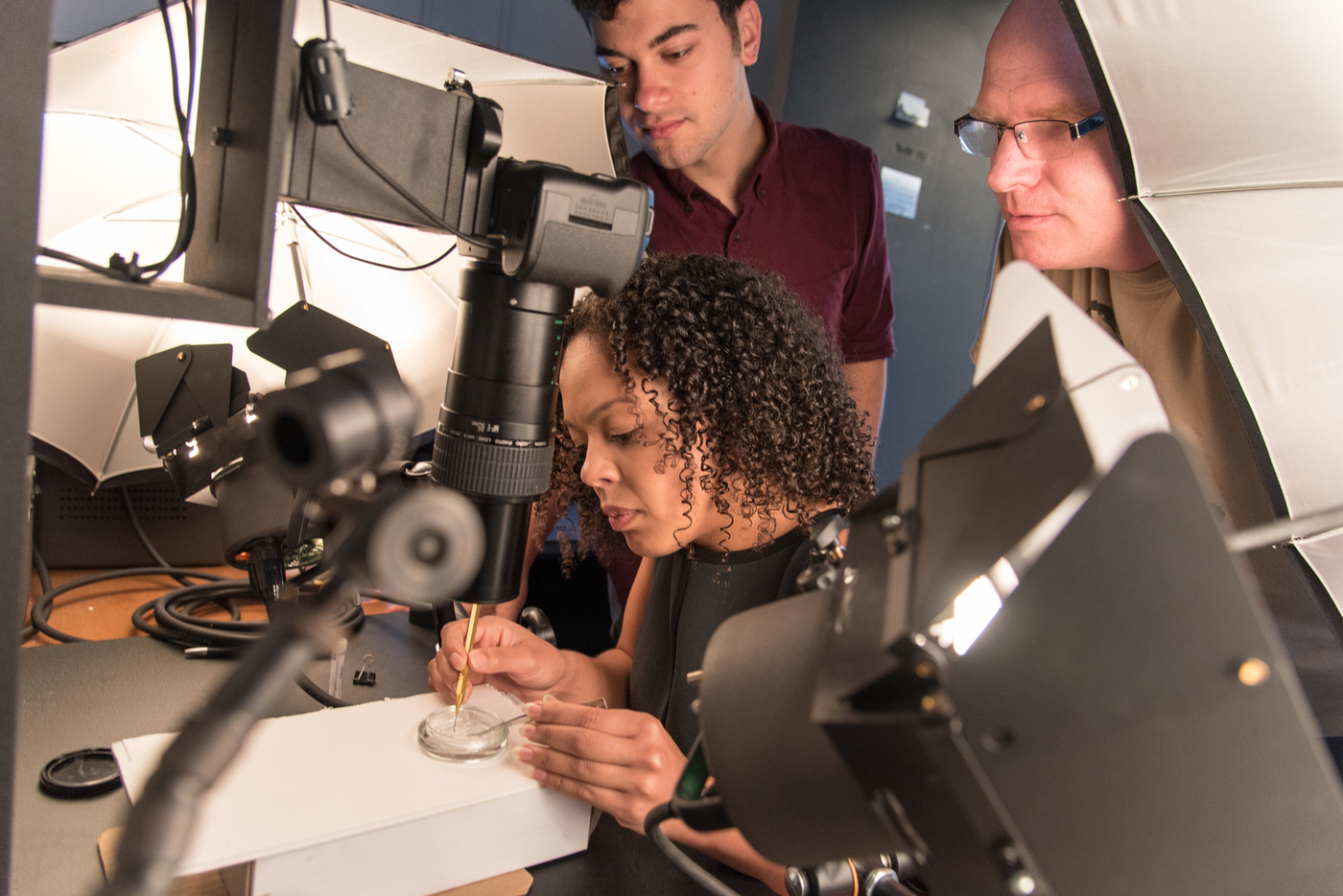 Ingi at the lab with his students.

"The main project in my lab at the moment is trying to understand the factors that could explain the settlement and diversity of the Caribbean, so-called biogeography. The Caribbean is considered to be one of our planet's biodiversity hotspots. The islands are home to more unique species than most other regions on Earth. How did organisms reach the islands and what factors have supported the high speciation rates that make the region so important for biodiversity? We use spiders and others arachnids to explore these questions. We are surveying the numerous islands and within the islands we look at other kinds of 'islands', i.e. caves," says Ingi.
Behaviour and dispersal ability linked to diversity

Since Ingi started work at the University of Iceland, he has published two papers. "These new papers support our hypothesis that high speciation rates occur due to the number of islands that are isolated by the ocean. Groups that cannot easily cross the ocean between islands speciate rapidly and each island ends up with its own species or multiple unique species. So in the Caribbean you see not only a large number of species, but each species also has a very localised distribution. For example, the vast majority of spider species can only be found on a single island and often just one area of an island – nowhere else in the world," explains Ingi. 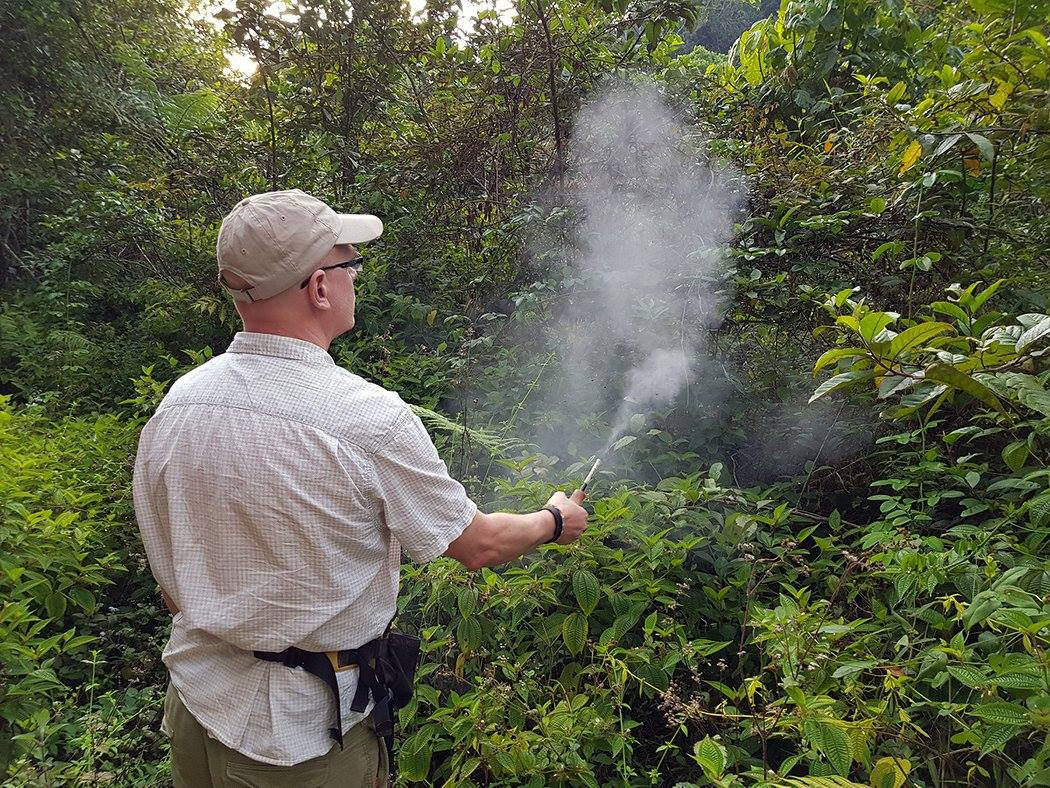 Ingi has conducted research and operated in Madagascar, in South-Africa, Puerto Rico, Slovenia, Canada, French Guiana and the United States. He, furthermore, holds a position at the Hubei University in Wuhan China.

He adds that his team's recent findings suggest that most species evolve within a group of organisms that are somewhere in the middle when it comes to dispersal ability. "Groups that hardly disperse at all are not present in the Caribbean, but those that have a high dispersal ability achieve a wide distribution. Speciation, however, is low, since there is a constant gene flow between the islands. This means that most of the biodiversity in the Caribbean is within groups that are quite good at dispersing, but not good enough to travel frequently between the islands. In other words, the behaviour and dispersal ability of an organism is directly linked to diversity. This is a new approach in biogeography and we are learning a great deal through our research into arachnids."

Ingi researches spider silk and discovered the toughest and most elastic material in the natural world – the silk of the Darwin's bark spider, which he and his colleague, Matjaž, named in honour of Charles Darwin 150 years after the publication of his famous work On the Origin of Species. Findings suggest that the toughness and elasticity of the silk is related to its unique protein combination. 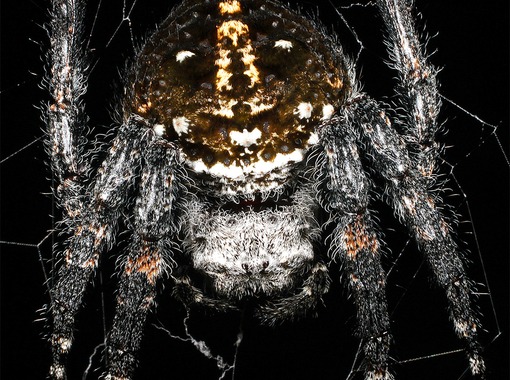 Trying to understand the structure of spider silk

Ingi is also involved with various research into spider silk, which he argues is a real wonder material. "It is tougher and harder than anything else found in nature and indeed beats almost any man made material. The main goal is to understand the molecular structure of spider silk and eventually discover how to manufacture 'silk' or a similar material in the lab," explains Ingi.
A new paper, recently published in the journal PLoS One, discusses this research, demonstrating that the silk of the Darwin's bark spider is particularly tough and elastic due to the protein combination in the silk strands. "This species seems to be able to mix together many different silk protein recipes. It has 30 such recipes in its genome, each with its own qualities, and is able to seamlessly combine them in a single strand. The spider can thereby produce a material with qualities that humans find extremely difficult to reproduce: very high elasticity and ultra toughness, like a kind of super steel that is flexible like rubber," explains Ingi.

Working with scientists all over the world

Unsurprisingly, Ingi's research has opened up exciting opportunities all over the world, not least opportunities to travel and explore our planet and its biodiversity, as well as human diversity – different languages, cuisines and cultures. "Having the chance to travel the world is the most rewarding part of my job. This globe trotting also sparks collaborations with scientists in other countries. Most of my projects are collaborations, usually with scientists from a wide range of countries. For example, one of our latest papers was written together with scientists from Iceland, the US, Columbia and Cuba," says Ingi, adding that he also collaborates a great deal with colleagues in China. 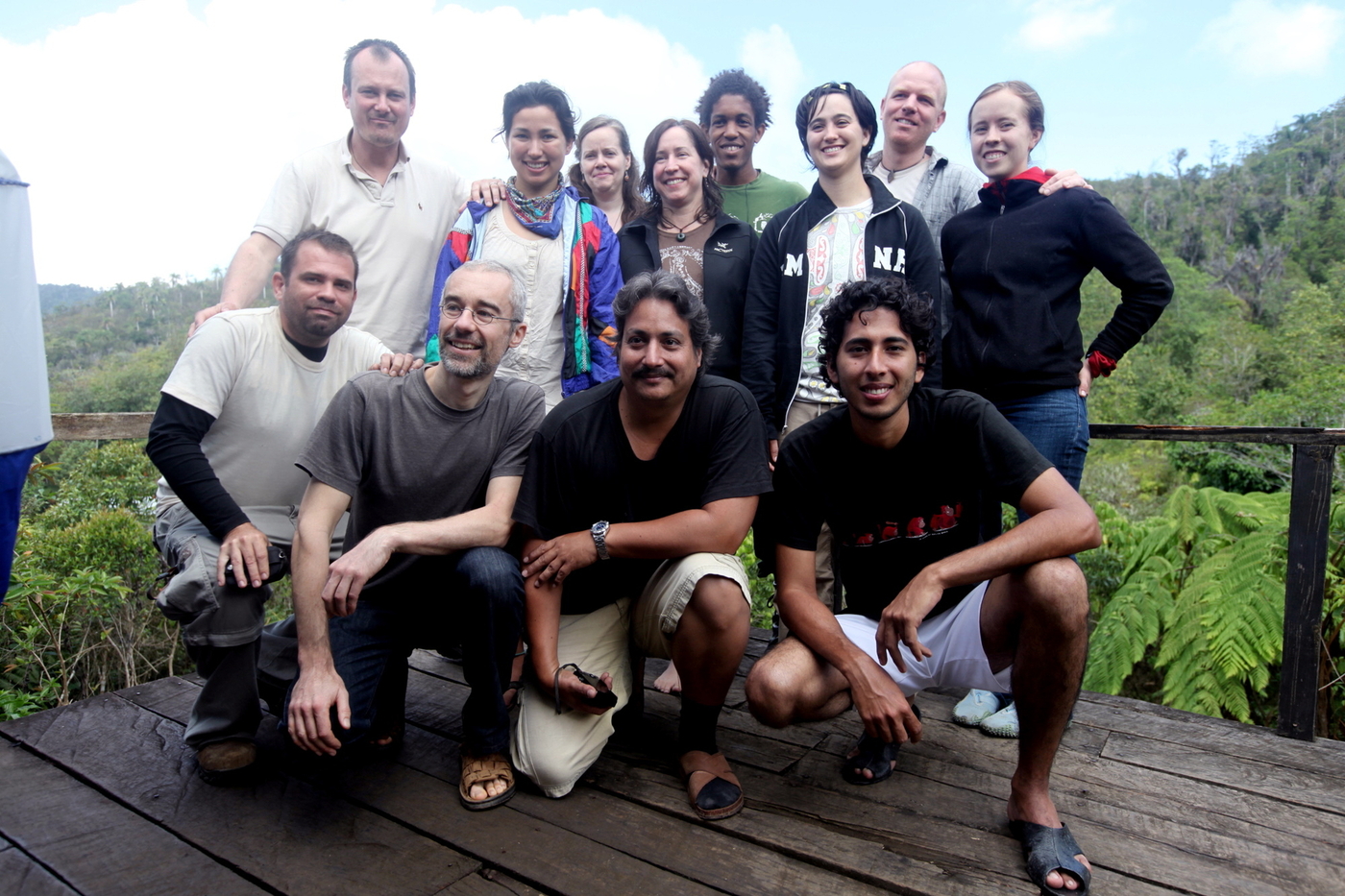 Ingi with collueagues on expedition in Cuba.

"The world is becoming more and more connected, which creates opportunities for fruitful partnerships between different countries and cultures. When different groups of people work together, they often achieve more than the sum of the individual efforts – something new and exciting is born!"

Almost all spiders are venomous, but very few pose a danger to humans

Many people are not particularly fond of spiders and some are so frightened that they are classed as suffering from arachnophobia, which is a kind of anxiety disorder. According to Ingi, the idea that spiders are dangerous is a misconception, although they are almost all venomous. "In the vast majority of cases, the venom is used to incapacitate insects or kill other small creatures that the spiders feed on. There are only a tiny number of spider species, out of over 50,000, that carry a venom dangerous to humans. Spiders are also a lot more scared of people than people are of spiders!" Ingi points out. 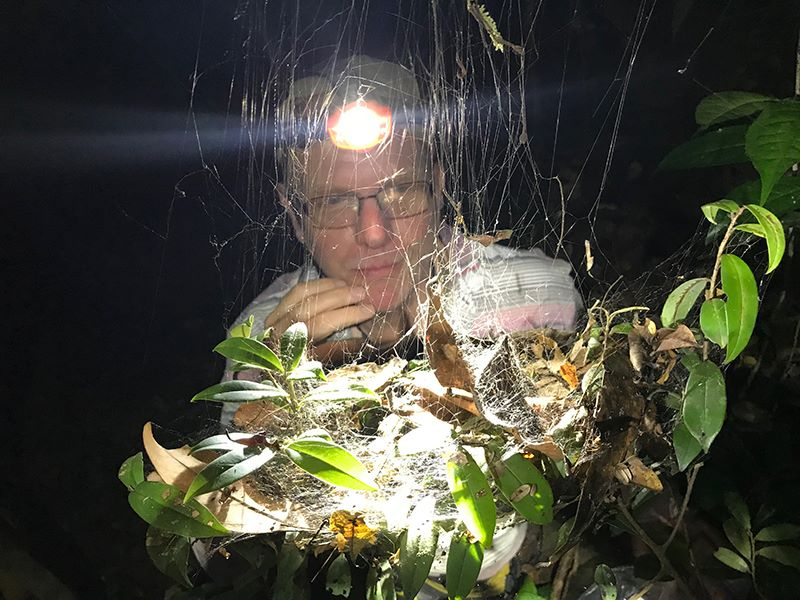 Spiders natural response is to flee when a large organism such as a human disturbs their immediate environment. "I have been working with spiders for almost 30 years, often collecting them in such a way that spiders literally rain over my head. I have never been bitten by a spider. Not once! They are harmless creatures," he says, pointing out that most 'spider bites' diagnosed by doctors have nothing to do with spiders.

Aims to explore biogeography and speciation in Iceland

Ingi has now returned to his first university and says that he always intended to return home in the end. "But with my specialisation, there are only 2-3 positions in Iceland that I could fill. An opportunity suddenly opened up and I decided to take it. I am excited to be home again, working at the university where I did my first degree and where both my father and my grandfather worked. I think there are a lot of opportunities here and I have many excellent colleagues at UI, many of whom I know from my time as an undergraduate. I foresee some exciting collaborations," says Ingi. He adds that the worsening political and social conditions in the US, where truth is under attack, also influenced his decision. 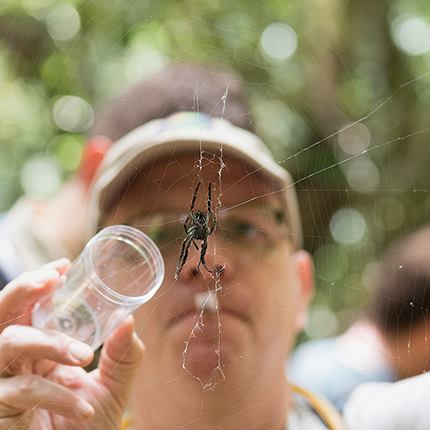 Ingi capture an eight legged one in a jar.

But does he intend to continue with spider research? "Yes, in part. I will continue with our huge project in the Caribbean. I am also very interested in starting a new project on biogeography and possibly speciation in Iceland. This will naturally require funding, so I'm planning to apply for grants over the next few semesters in order to launch my Icelandic study," concludes Ingi.

You can learn more about the work of Ingi and his colleagues at the Agnarsson Lab website.