Are there ants under Reykjavík?

"Most Icelanders probably think that there are no ants in Iceland, just as I did when I first arrived here, but our research has revealed five different species that have settled here. Four thrive in houses due to the heat and the humidity, but one species lives outside in gardens," says Marco Mancini, master student in biology at the University of Iceland and a member of the antsquad at the University's Institute of Biology. The squad maps the distribution of ants in Iceland, and examines whether there are giant ant colonies in the city's sewage system.

The project is called Ants in Iceland (Maurar á Íslandi) and is linked to Marco's master project. The project is conduced under the supervision of Arnar Pálsson, professor of bioinformatics and Mariana Lucia Tamayo, associate professor in Environment and Natural Resources. Andreas Guðmundsson, BS student in biology is also involved in the project.

From Old French to Biology

Marco's background in university studies lie far from biology as he is an Italian with a degree in Old French. He says, however, that he has been interested in ants since he was a kid. "I moved here a few years ago and became fascinated by the country. This was, however, the only country in the world I knew of that had no ants. I did not want to let go of the idea that there were no ants in my environment so I stared to look around," says Marco on how the project began. 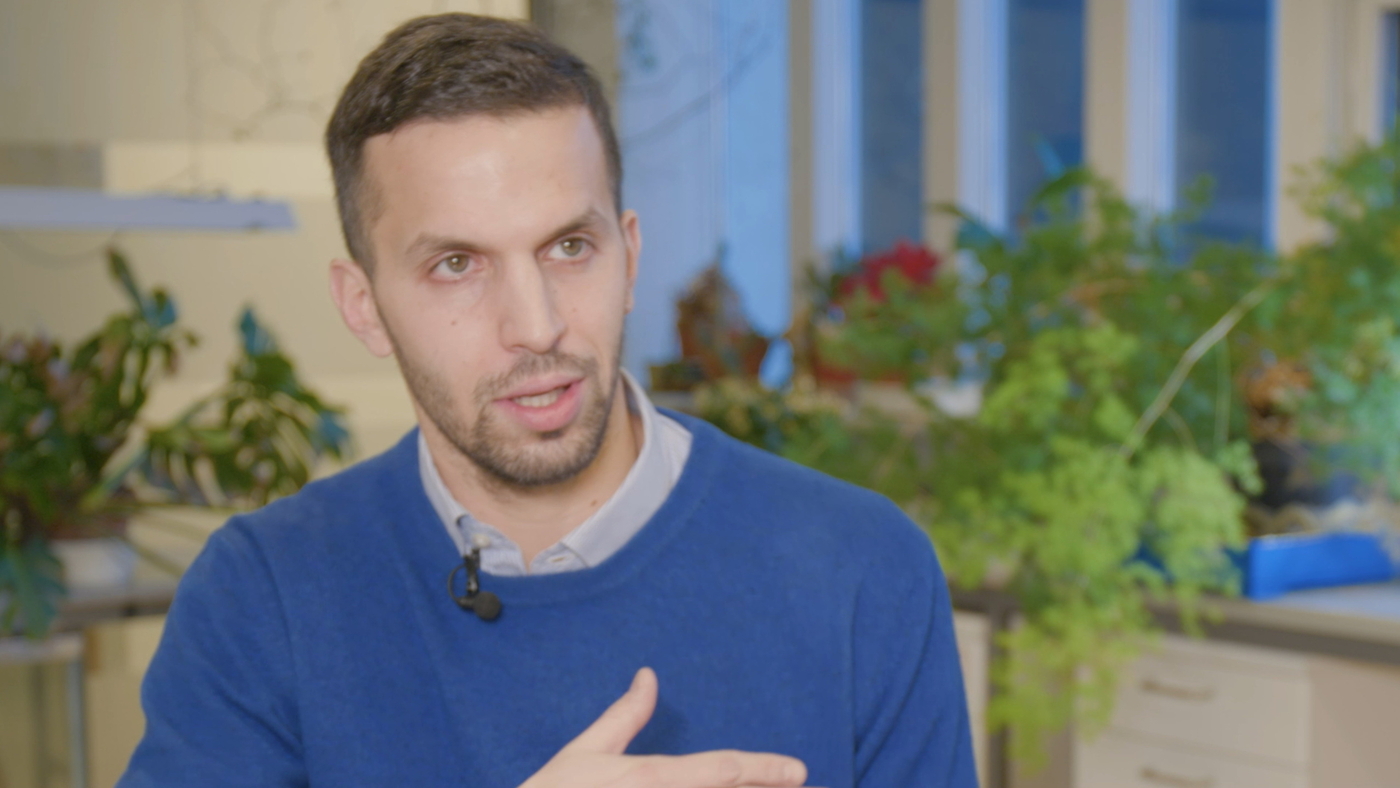 He had the idea of contacting an exterminator to check whether they had received any calls connected to insects or ants. "I finally found one, a great guy, who I am still working with. I went with him on a few calls and it became clear that there are ants here. I did this before I applied for studies at the University, out of sheer interest, says Marco who also got in touch with specialists at the Icelandic Institute of Natural History; Erling Ólafsson and Matthías S. Alfreðsson. Erling has documented instances of ants in the Icelandic Institute of Natural History database and described how ants were first detected here in Iceland in 1970s.

Marco registered for a Master's programme in biology and started his project in spring 2020. Andreas Guðmundsson joined him and they collaborated on a project last summer with the support of the Student Innovation Fund.

Ant inspection with an exterminator

"We go with the exterminator every time there is a report of ants and he learns some stuff from us, such as how to deal with them," says Marco and Andreas adds: "We go on site and often take a few ants with us that we put in alcohol for preservation. This way we can conduct genetic research and find out which species they belong to." Appearances are enough to analyse some species; DNA helps with others. Some of the samples have been sent to Germany for identification as analysis of some ant species is based on extensive and specialised knowledge. 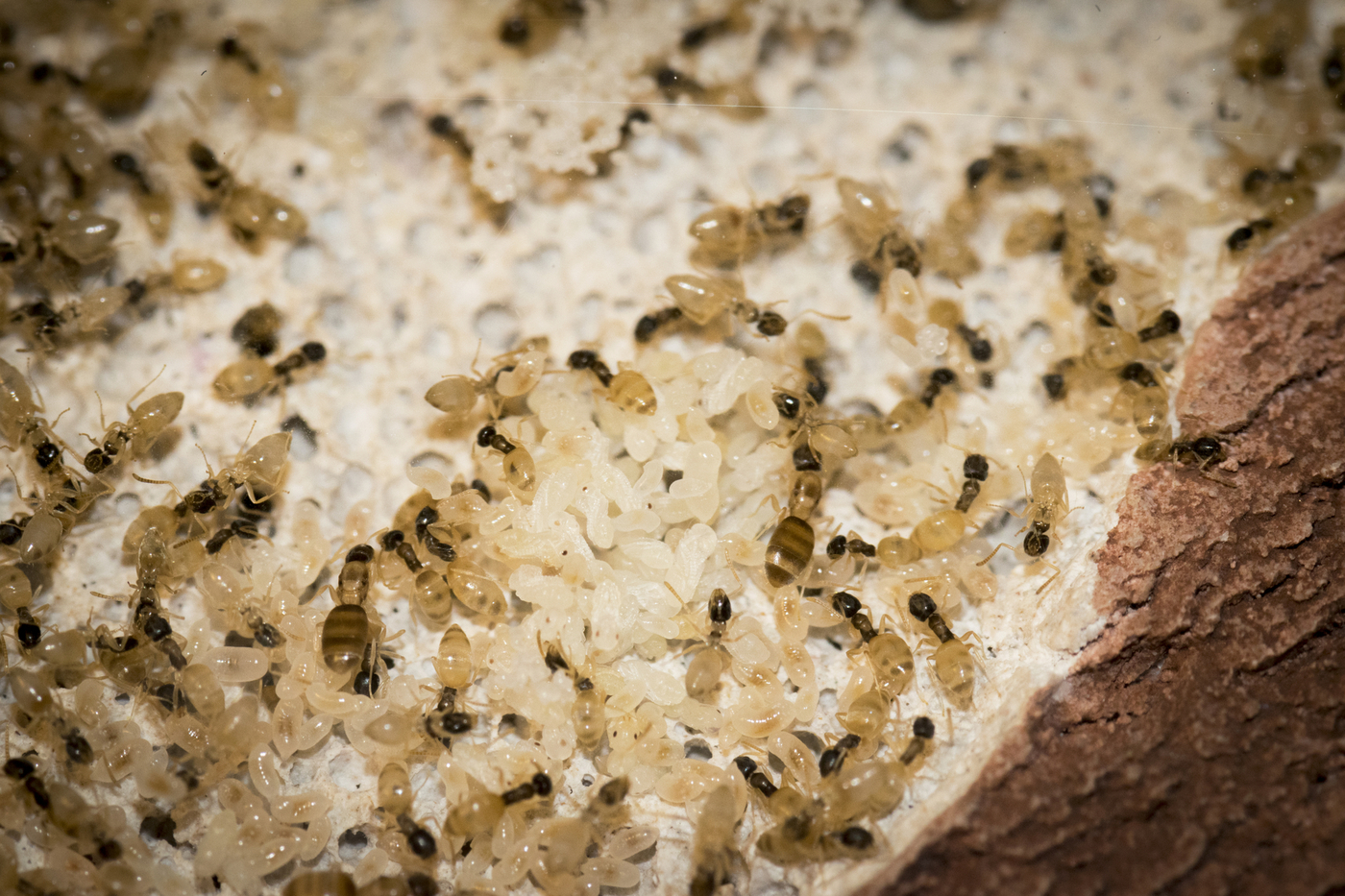 Ghost ants are one of the species found in Iceland.

Ant colonies are usually destroyed but if possible they try to take the whole colony for further study. Marco says that the ants are invasive in Iceland and therefore do not belong here, so he destroys the colonies with a clear conscience.  "We have to do it for our environment," he says.

The emphasis in the project is placed on shedding light on the diversity of species, history of the settlement and the distribution of ants in the greater capital area. "We know that there are ants in Akureyri, Selfoss, and in Hveragerði, but we are focusing on the South-west corner of the country. Maybe in the future, in a doctoral thesis, we will study the whole country," says Marco and Andreas adds: "We are planning to design a map of the distribution of species, and in the future we can perhaps study in what area the ants have dispersed and where they may go next."

"The most common ant is called Roger's ant (húsamaur) and those were found here in Iceland already in 1974. There is a theory that has been put forward that there could be a giant colony in the sewage system beneath Reykjavík as the species needs heat and humidity to survive. The ants then get into houses through the sewage system moving from one house to the next," says Marco. 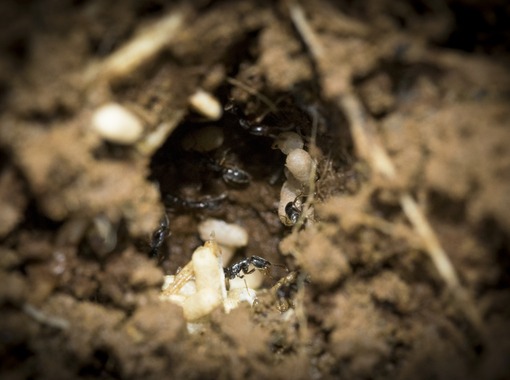 Almost impossible to exterminate the colonies of Roger's ants

As previously stated Marco and Andreas have found five species of ants already, four last summer.  "The most common one is called Roger's ant (húsamaur) and those were found here in Iceland already in 1974. There is a theory that has been put forward that there could be a giant colony in the sewage system beneath Reykjavík as the species needs heat and humidity to survive. The ants then get into houses through the sewage system moving from one house to the next. We plan on doing genetic research to find out the extent of the likeness of the genome of workers within the species and whether there is in fact a giant colony underground in Reykjavík, or if there are colonies dispersed around the city," says Marco.

He also points out that it is almost impossible to exterminate the colonies of Roger's ants. "The workers are not found in the houses, only newborn queens flying around.  It is perhaps possible to poison single ants but not the whole colony. This is why we believe that their number will only grow, not decrease," he says. 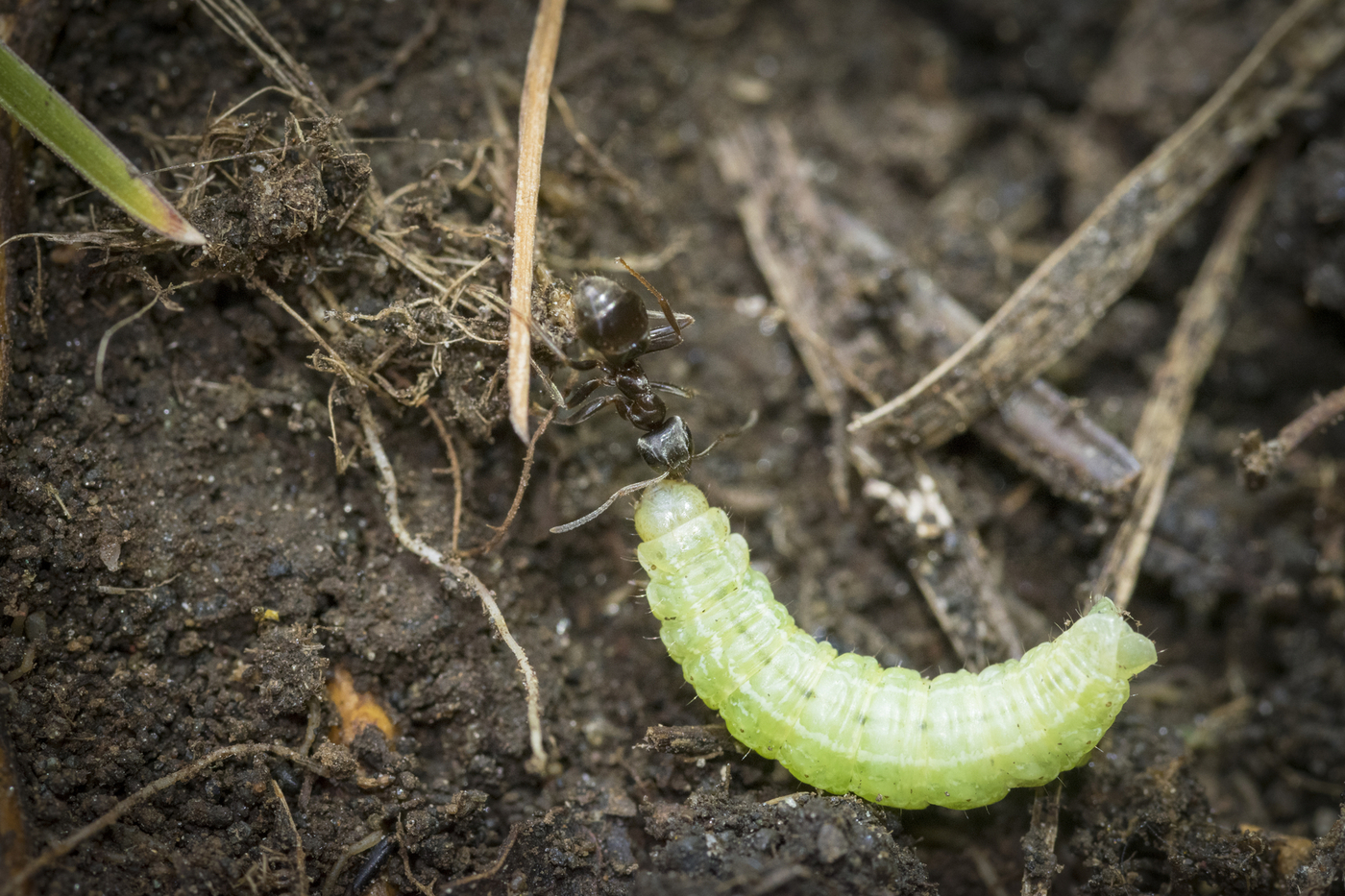 Black garden ant are the only ones that live outside in Iceland.

The only ant that lives outside in Iceland is called Black garden ant. "They can be found in gardens in the West of the City (Vestubærinn) and Garðabær, says Marco and adds that they have been found in a few places, and the squad wants to find out whether they have been here for a long time. "We are going to study whether they fight when ants from two colonies are put together. If the fight is fierce it can be an indication that they are genetically different and have thus landed in Iceland a long time ago."

Both these species are considered harmless, but the same cannot be said about the Pharaoh ant that has also been found in Iceland. "The species can be dangerous as it can carry pathogens such as salmonella and streptococcus. They can be hazardous, especially if they colonise in hospitals or much-frequented places. Their distribution is still rather limited, with only a few records of them here in Iceland in the past few years," says Andreas. 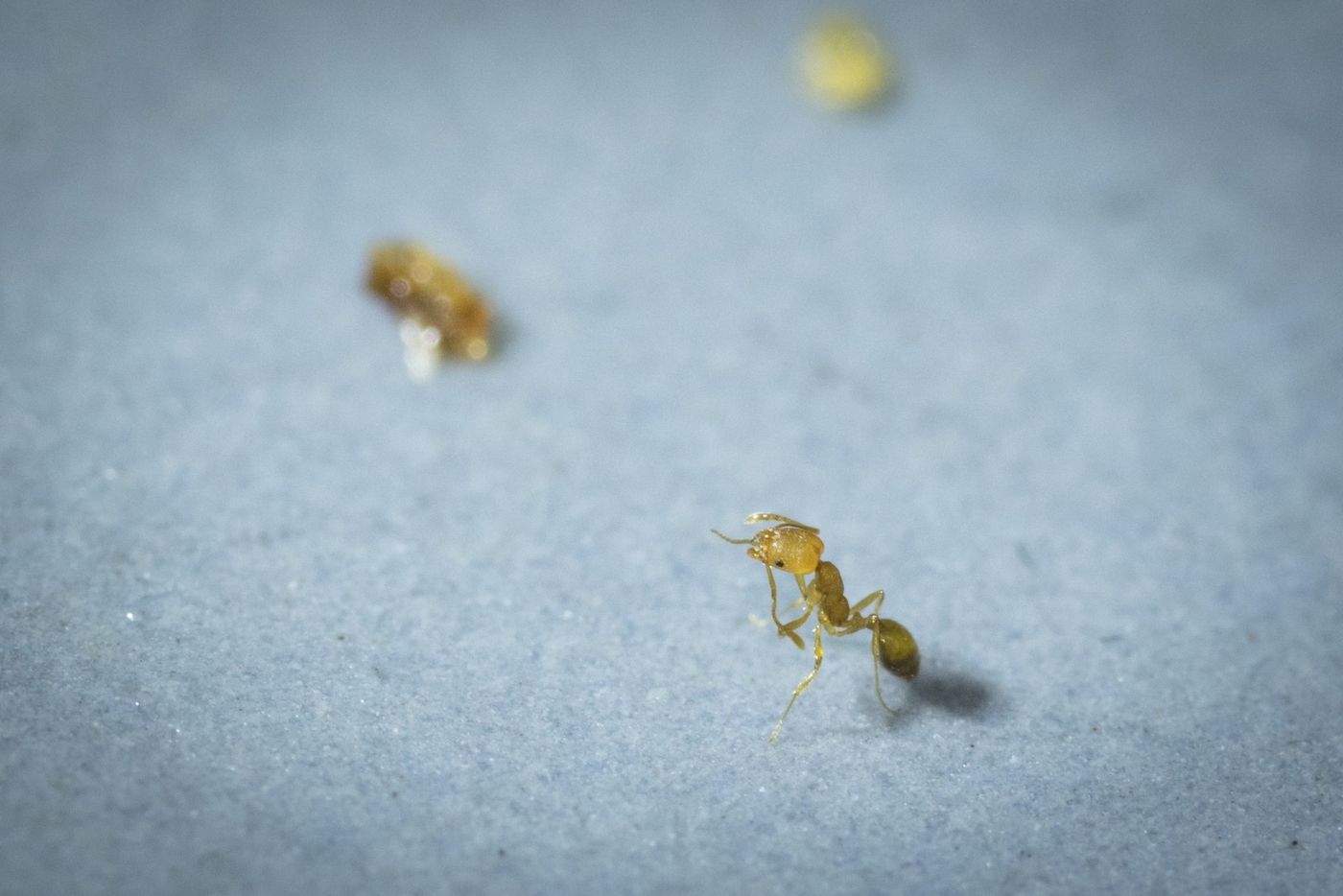 Pharaoh ants can carry pathogens such as salmonella and streptococcus.

The fourth species is called the Ghost ant.  "They are tiny but travel very fast and can easily move their colonies if they do not find enough food or the right temperature. We only found them in one building, they were everywhere in that building but we managed to remove the whole colony. It was under a flowerpot in the living room. From there they travelled out to the balcony and over the whole building, twelve apartments if I remember correctly," says Marco and points out that it is easy to get rid of this species.

The fifth species was recently found in Laugardalur. "It is part of the genus Pheidole but between 1,000 - 1,500 different species adhere to it and we have not yet confirmed which species this is," says Andreas.

Incredible how many species have been found here

But how did the ants get here? "I am fairly certain that ants came here with humans. Iceland is too far, and it is too cold for them to be carried by birds," says Marco.

"The movement of people and goods has increased considerably in recent decades and ants can travel here in potted plants, wood, construction material and even in suitcases when you come home from abroad," adds Andreas and continues: "These ants seem to adjust pretty well here in Iceland as our houses are well heated and there is often humidity in the floors; an ideal habitat for ants." 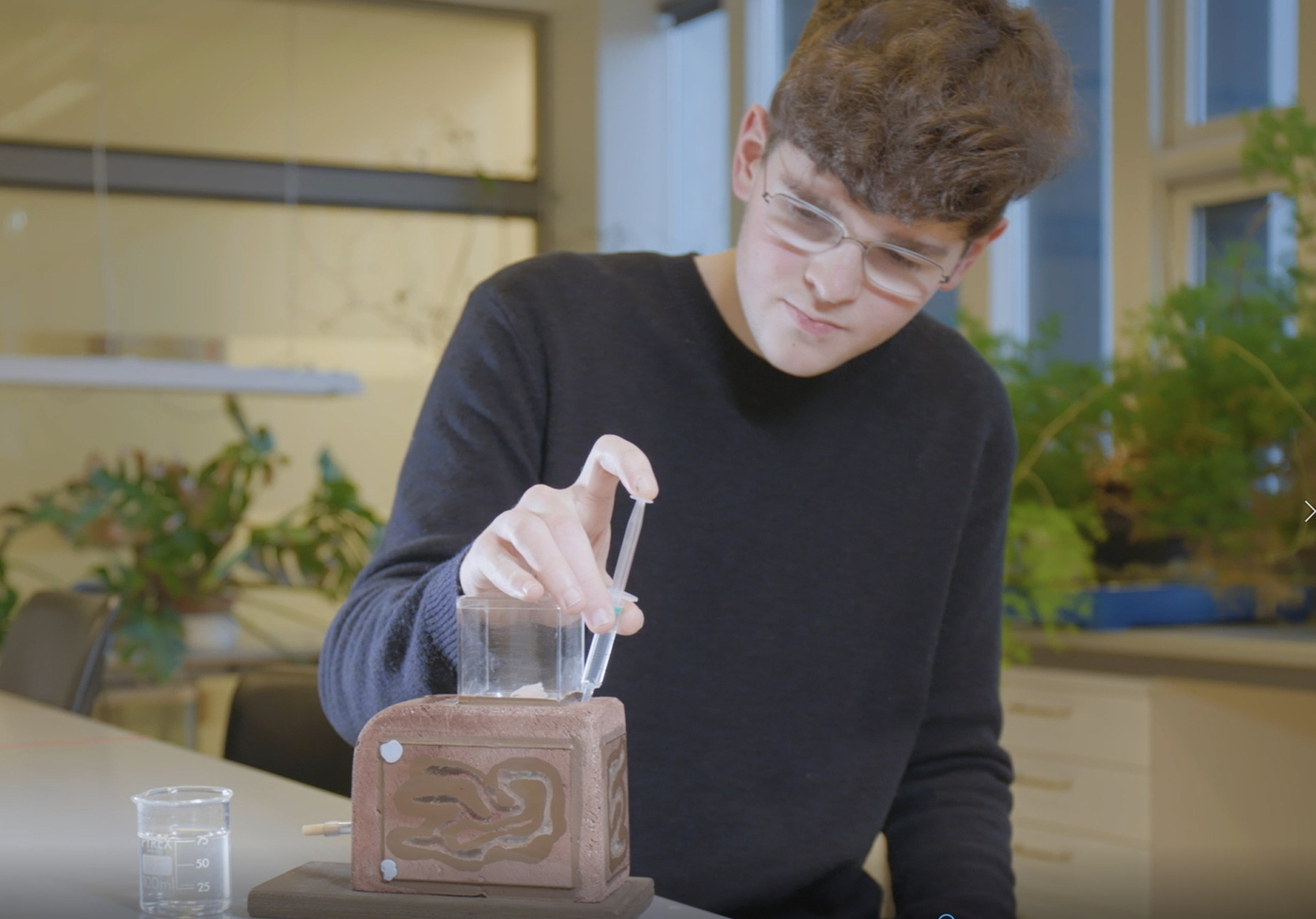 Andreas says that it is, nonetheless, incredible how many species have been found in Iceland. "One would think that it was very hard to get here. The ants need to fertilise abroad and then get to Iceland. Once here, a fertile queen needs to find a suitable habitat that must not be too cold, not too hot, not too damp, not to dry and there has to be food and no enemies. All this has to be in place so that an ant can settle down and form a colony. And this seems to have happened very often, as over 20 species of ants have been found here in Iceland."

Marco reckons that more species will immigrate to Iceland in the future, especially due to climate change and transportation of people and goods.  "These are highly invasive ant species all over the world. Many other species of ants exist, and since these ones immigrated in Iceland I see no reason why others would not do that as well.  Some might also be here already that we have not found yet," he says.

Want to make educational material for primary- and compulsory schools

Marco and Andreas are not only planning further research but they also want to increase society's knowledge of these tiny beings. "We have applied for a grant from the Educational Materials Development Fund at the Icelandic Centre for Research this summer and are going to work with a team of illustrators and specialists in making educational material and publish a pamphlet on ants and insects and their habitat / community. We plan on visiting primary- and compulsory schools with colonies living in artificial nests and show the ants to the kids and leave them with material to educate them on what creatures share our urban environment with us," says Marco.

Marco and Andreas call for tips from the general public on possible ant colonies in the greater Reykjavík area. „We are on Facebook- and Instagram and we also have a webiste where we can be contacted. It would be great if everyone who detects ants would contact us as the more that contact us the more extensive our map becomes, and then we can better map the distribution," concludes Andreas. 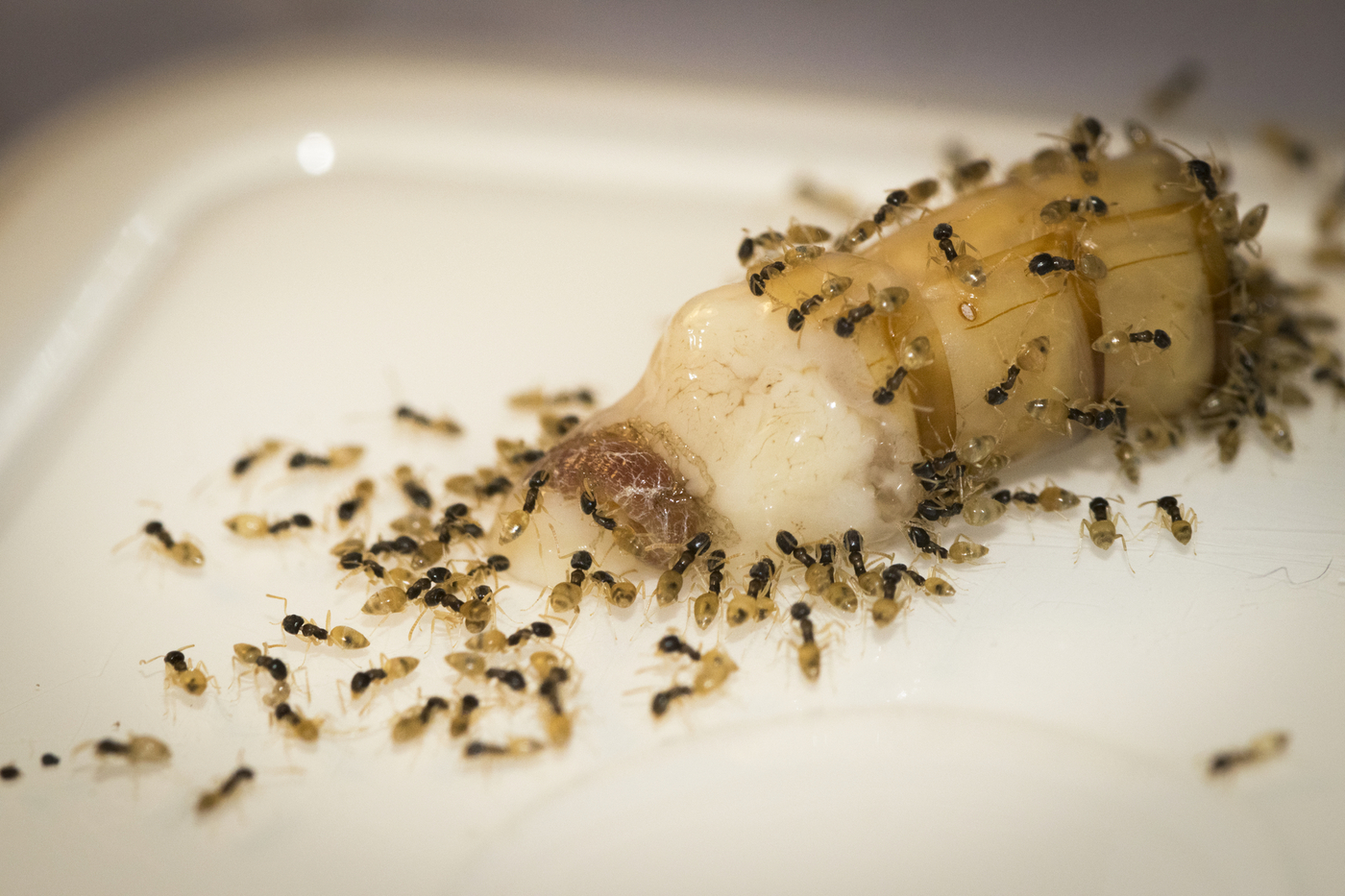