Killer whales have sometimes been called the wolves of the sea, since they hunt in organised pods and are top predators in their marine habitat. Their fearsome name suggests that there isn't much that could unsettle them. So why do they sometimes seem to flee from the mobbing and harassment of pilot whales here in Iceland, as scientists have observed? This is the question that Anna Selbmann is trying to answer with her doctoral research at the University of Iceland Faculty of Life and Environmental Sciences.

The image shows a typical recording of the sounds of killer whales that proved different in Iceland than in Norway.

It was during this research that she first observed interactions between pilot whales and killer whales in Iceland, which she says are at once stunning and perplexing. "It seems inconceivable that killer whales, the top predators of the ocean, are avoiding other whales and even flee at high speed. It raises many questions: Why are the pilot whales harassing the killer whales? Is it competition for food or mobbing behaviour? What triggers the interaction and what is the impact on killer whales?" asks Anna. She also adds that acoustic communication is very important for both species, so it makes sense to wonder what role it plays in such interactions and whether it could explain the behaviour of the killer whales.

Anna is conducting her study under the supervision of Filipa Samarra, who recently started work as a research specialist at the UI Institute of Research Centres in the Westman Islands, Jörundur Svavarsson, professor at the University of Iceland, and Paul Wensveen, a postdoctoral researcher at the University. She is also collaborating with scientists from CEREMA in Strasbourg and the University of St Andrews in Scotland. "We also work with citizen scientists from Earthwatch, who join our fieldwork and help us collect data," says Anna, who received a doctoral grant from the Icelandic Research Fund for the project.

"To understand the nature of the interactions between pilot whales and killer whales we use a combination of land and boat-based observations. We use a theodolite to record precisely where the whales are and where they are going. By boat we can get closer to individual groups of whales," says Anna Selbmann 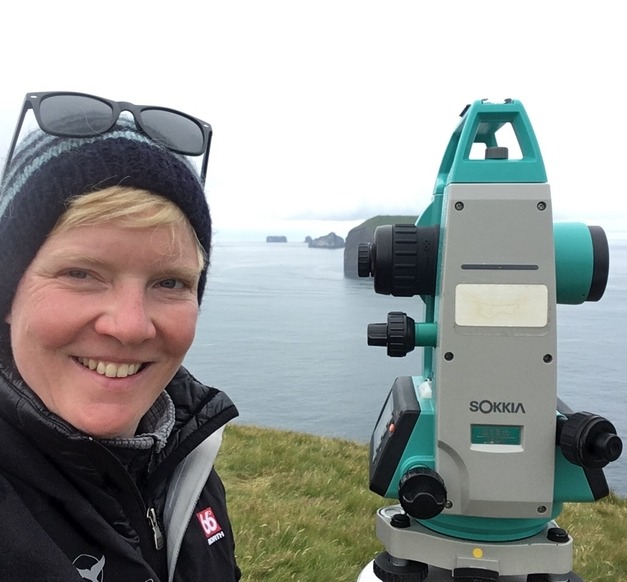 Anna explains that the study involves observations from land and by boat, using the latest technology. "To understand the nature of the interactions between pilot whales and killer whales we use a combination of land and boat-based observations. We use a theodolite to track groups of whales from Storhöfði in the Westman Islands, where you have a great overview of our research area. With the theodolite we can record precisely where the whales are and where they are going. By boat we can get closer to individual groups of whales and record them in more detail: how many individuals are there, are there any juveniles, which individual whales are involved in the interactions," she says.

In order to assess the role of acoustic communication in interactions between the two species, the team use recordings of pilot whale calls which are played back underwater near killer whales. The response of the killer whales is then recorded. "We do this using a tag on the animal which records sound, depth, and movement. From this detailed data we can learn a lot about how the killer whales behave before, during and after the playback of the pilot whale sounds and whether they change their behaviour in response," explains Anna. 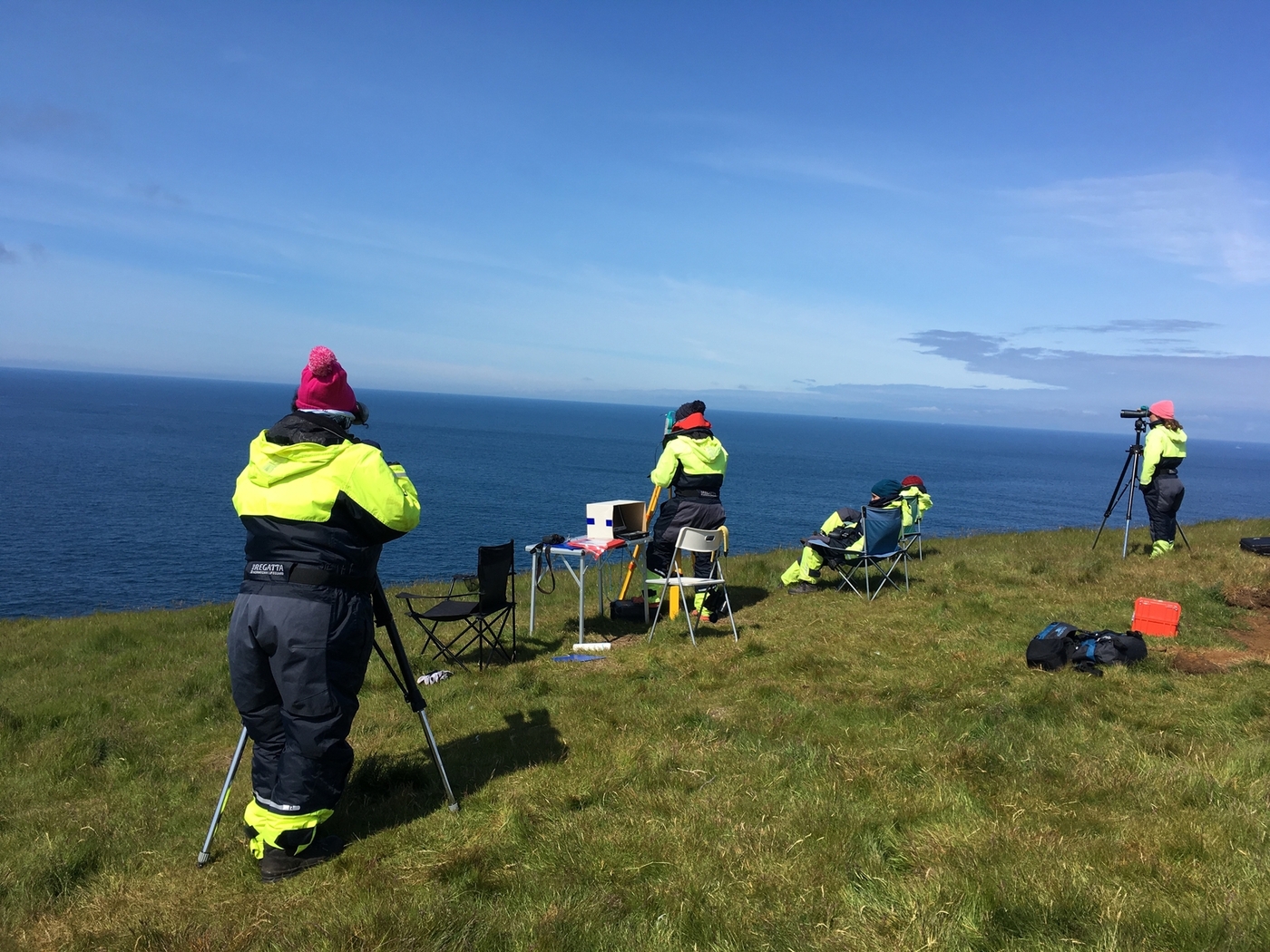 She adds that these experiments also give them an opportunity to see whether killer whales change their acoustic behaviour around pilot whales. "If killer whales want to avoid detection by pilot whales we would expect them to alter their acoustic behaviour to reduce the distance over which they can be detected. This could include lowering call volume, changes in call features or even total cessation of sound production," she says.

As mentioned above, Anna is also exploring whether there are geographical differences in killer whale call repertoire around Iceland. To do this, she is using data collected in Iceland over a 30 year period (1986-2016). "These recordings were collected using different types of underwater microphones, or hydrophones. These include hydrophones deployed from a boat close to killer whales, as well as moored hydrophones that are deployed for several weeks, and tags, which were attached to whales." 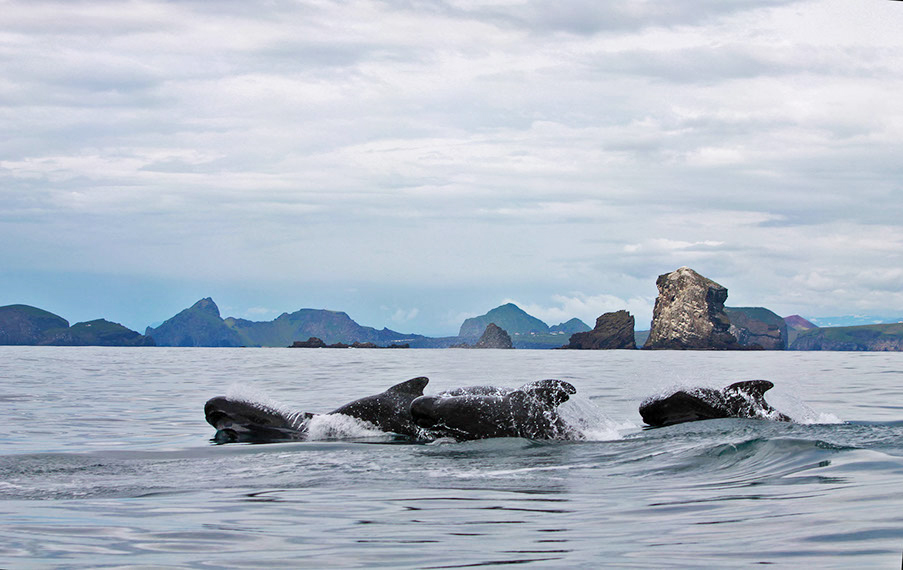 Analysis also revealed that killer whales in different locations in Iceland share most of their repertoire of calls. The animals are commonly sighted in Breiðafjörður over the winter, following the herring which is their main source of food, but near the Westman Islands in summer where the herring spawn. "We have found that killer whales recorded in these two places share most of their call repertoire but certain call types are only ever recorded in one of the two locations. This supports what we know from identifying individual whales (using photographs of their dorsal fins), that a proportion of the Icelandic killer whale population appears to follow the herring year round but that other parts are only present temporarily in winter or summer," she says, adding that the research team is currently finalising a paper on these findings.

The research sheds light on the potential impact of climate change

Anna says that the value of the research lies in the fact that it will create new knowledge on the factors driving marine mammal interspecific interactions and provide an increased understanding of the behavioural ecology of these two species. "Insights into the role of acoustic communication in interspecific interactions are also important in the wider context of behavioural ecology. The research will also be applicable to other species, which is particularly important under changing climatic conditions. Climate change may cause the distribution of different species to change, so that species that were not in contact start to share habitats and interact. For example, pilot whales were not seen regularly off the Westman Islands in the past but are now regularly sighted in the summer and interacting with killer whales. These interactions may have consequences for the feeding habits and habitat use of killer whales, so a better understanding of their nature will help us assess potential changes to the ecosystem off the Icelandic coast."

Anna also points out that increased understanding of cetacean species in Icelandic waters is also of public value, since national legislation and international conventions require the protection of marine ecosystems, which are under pressure due to human actions. "For example, little is known about how a top predator, such as the killer whale, responds to a perceived threat, but this information can be applied to understand the effects of human disturbance, for example from tourism, shipping and marine construction, on the species."