During the summer of 2020, Surtshellir, the best known lava cave in Iceland, was thoroughly mapped with a laser scanner and drone. Two students at the University of Iceland, Ravindra Thapa and Diego Bizenhofer did the job under the supervision of Ingibjörg Jónsdóttir, associate professor in geography and Þorvaldur Þórðarson, professor in Volcanology and Petrology.  They both work at the Faculty of Earth Science. Thapa and Bitzenhofer are both students in engineering at the University.

Surtshellir is historically famous and the stage of evil deeds in Sturlunga, a collection of Icelandic sagas by various authors from the 12th and 13th centuries. It mostly deals with the story of the Sturlungs, a powerful family clan during the Age of the Sturlungs period of the Icelandic Commonwealth.

This historic stage was mapped in detail and one of the results is a video where guests can travel around in the cave, in all its long and crooked passageways.

"The aim with the project was to gather detailed data on the shape and structure of the cave to better understand the lava channel as a transmission system within the lava field, as well as preserving it in virtual reality both for the future and for promotion," says one of the students, Ravindra Thapa, who is from Nepal.

Two students at the University of Iceland, Ravindra Thapa and Diego Bizenhofer, mapped Surtshellir last summer which proved both complicated and a lot of work. "The work was challenging as the cave is cold, dark and damp and safety of the utmost importance. From over three hundred scanning points we were able to create a scatter diagram and then a virtual reality of the entire cave," says Bizenhofer.  IMAGE/Kristinn Ingvarsson. 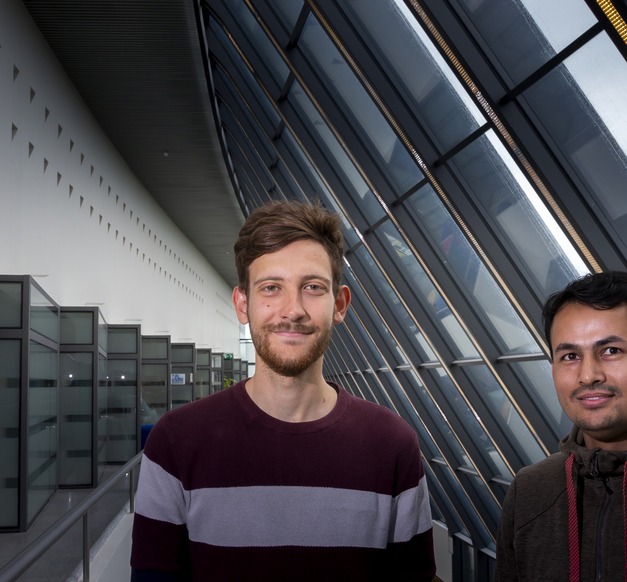 Surtshellir is in Hallmundarhraun lava field in Borgarfjörður which is considered to have come into being in the 10th century, or soon after the settlement of Iceland. It is the longest lava cave ever found in Iceland, however, in a land with many lava fields there might still be caves of the same size still to be discovered.  Surtshellir is almost 2 km long.

Diego Bitzenhofer, who is from Germany, says that the work in the field had taken around 10 days, involving setting up the laser equipment, lighting and reference points.

"The work was challenging as the cave is cold, dark and damp and safety of the utmost importance. From over three hundred scanning points we were able to create a scatter diagram and then a virtual reality of the entire cave," says Bizenhofer.

"A large part of the project was processing, cleaning and putting the data together. The lava surface was photographed with a drone and from the photogrammetric mapping we calculated an elevation model and a coherent picture that can be linked to the cave data."

The project is under the auspices of the University of Iceland in collaboration with Árni B. Stefánsson - Fjörgyn ses and Jón Bergmann Heimisson - Punktaský ehf. and the Directorate of Labour. All the parties supported the project.

The project is one of the many that the Directorate of Labour supported especially due to COVID-19, so that the collaboration between the directorate and the University of Iceland resulted in a product that can be used as a promotion for tourists and for the benefit of earth sciences.