Researching the impact of shorter term of study for matriculation examinations

University students are generally more critical and active during their classes than before, whilst their language skills have deteriorated somewhat. These are part of the first findings of a study on the faculty's outlook on the shorter term of study for Icelandic matriculation examination.

One of the biggest changes on the Icelandic upper secondary school was made six years ago when the term of study was shortened from four years to three years. The first class to go through the new system graduated in spring 2019. All of the Icelandic upper secondary school currently operate by the three year system and it is thus interesting to look at the impact of this change within the education system.

María Jónasdóttir, doctoral student has with Guðrún Ragnarsdóttir, assistant professor, and Elsa Eiríksdóttir, associate professor, all at the School of Education, worked on a study on the impact of shorter term of study at university level. They look at the faculty's opinions on the changes, especially concerning the preparation of upper secondary school students for the next education level, university. The researchers interviewed sixteen experienced university lecturers and heads of faculty at all of the University's schools to find out whether they had encountered changes in their work following these alterations. At the same time they sought to find out how the universities are responding to a changed situation.

"This is a part of a larger research project that we are working on with Valgerður S. Bjarnadóttir, where we look at changes in policy in upper secondary schools and the execution of the policies." They say that the idea with the study is to look at the impact of the shorter term of study in a larger context and map the consequences on the educational system as a whole. "We study this from theories of hierarchy of knowledge; which knowledge and subjects have kept their status and which ones have been decreased," says Elsa.

The differences in interviewees' answers by schools during data analysis caught their attention.  The interviewees spoke differently about the impact of the shortening of the Icelandic matriculation examination had had on their field. Despite this difference there were certain factors that all interviewees, across all fields mentioned.  They spoke of the lack of an overall vision when the changes were made and that collaboration between educational levels had been lacking. All interviewees mentioned that students' knowledge in Icelandic and writing abilities had worsened as well as their general language skills, apart from English.

Furthermore, María mentioned that an interesting discussion on the students' abilities to take exams had risen, as the interviewees felt they had changed considerably in recent years. "The interviewees said that students answer with  short texts, make bad use of their time for the examination, and have a hard time answering open questions," she says. It, however, varies between interviewees to what extent they associated this changed behaviour with the shorter term of study for the Icelandic matriculation examination. Guðrún agrees and says that there are probably many concurrent factors behind this, which they have yet to analyse in depth. At the schools that were most affected by the changes there was already talk of adjusting to them by imposing stricter admission requirements and offering preparatory course before the beginning of studies.

One of the biggest changes on the Icelandic upper secondary school was made six years ago when the term of study was shortened from four years to three years. Research scientists are working on a study on the impact of shorter term of study at university level. image/kristinn ingvarsson. 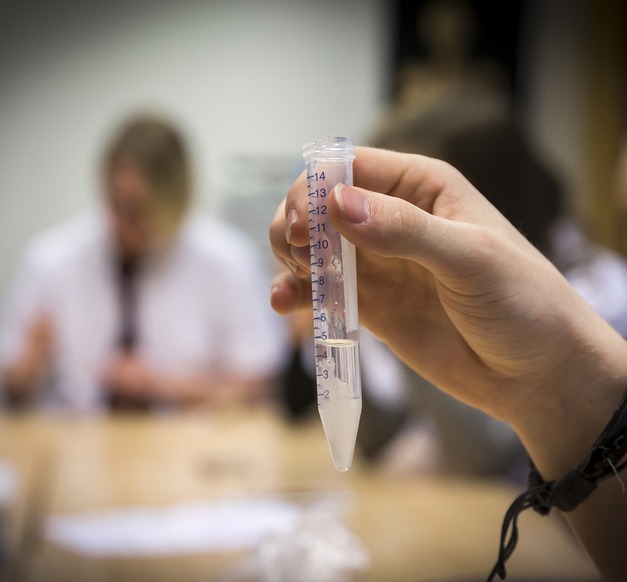 Guðrún pointed out that the data gathered also revealed a positive development. The interviewees considered the students to be more critical than before. and more active in the classroom. "They are much better informed on political issues and more willing to speak up in classroom discussions. This means that the classes become more lively and these abilities in students today is important, both for the universities and for us as enlightened citizens," she adds. Guðrún points out that this is probably due to the basic elements introduced in the Icelandic National Curriculum Guide for Upper Secondary Schools in 2011. Interdisciplinary themes

According to María, Guðrún and Elsa the study is far from over as they are just scratching the surface. "Originally were were only going to study the impact of the abridgment, however, it soon became clear that we need to look at it from the point of view of hierarchy of knowledge and other factors," says Guðrún.

We are going to talk to more people, including those who took part in the policy making and people working in the upper secondary school themselves. Furthermore, we plan to study in more detail the subject matters at the upper secondary level by examining which subjects and electives have been kept, and which ones have been discarded with the shortening.

Author of the article: Bríet Einarsdóttir, MA-student in Meida and Communication Studies.