The question of how much carbon dioxide is emitted from soil in Iceland annually has been a contentious issue for a while. A new measuring device may help to settle the matter. Ólafur Sigmar Andrésson, professor at the Faculty of Life and Environmental Science leads a research and technological development project in which a device that could provide valuable feedback on what is known as soil respiration in Iceland. The device is both simpler and much cheaper than equipment hitherto used for such measurements.

Iceland is party to numerous international contracts on environmental protection, and some of them stipulate the volume of carbon dioxide that the country is allowed to emit. There is a certain to limit to the volume of emissions acceptable, globally and locally, if irreversible damage to Earth’s ecosystem is to be avoided.

The discussion on the emission of pollutants into the atmosphere usually focuses on cars, aeroplanes, and large-scale industry. However, in Iceland, a large volume of carbon dioxide and other pollutants are released into the atmosphere by micro-organisms in the soil through the process known as soil respiration.

It has proven challenging to measure soil respiration, especially in Iceland. Applying data from other countries to Icelandic conditions has proven difficult. This is because Icelandic soil differs significantly from soil in neighbouring countries. This can be traced to high volcanic activity and large amounts of carbon in soil. Available measuring equipment has not been suitable; each device costs around 5 million Ikr and they can only measure a very limited surface, or just a fraction of a square metre.

“When calculating emissions of greenhouse gases soil respiration is the most uncertain factor in Iceland. In 2016 these emissions were estimated to range from 2-60 million tonnes annually, which shows us the scale of the uncertainty,” says Ólafur Sigmar, project manager.

“This urgent need for better data from measurements, and technological advances in this field were the spark for this research and technology project, aimed at making such measuring equipment cheaper and more convenient.“

Ólafur Sigmar Andrésson is here with the device the group has developed. “We have shown that cheap devices that can perform well over shorter time periods can be developed. The next step is to develop one that can operate throughout the year and gather information in real time from a large area. “ image/kristinn ingarsson. 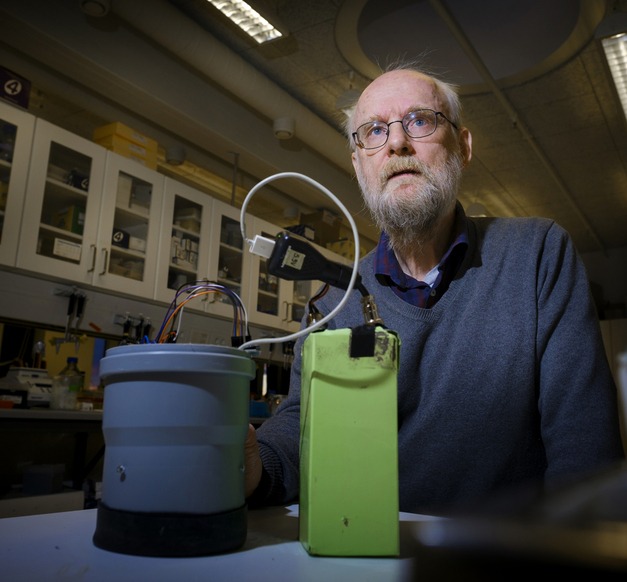 Ólafur Sigmar, joined by a team of university students and in collaboration with the Technical College of Iceland and the technical studies centre of the University of Iceland (Tæknifræðisetur) developed a measuring device that is both much cheaper than equipment that has hitherto been in use, and much more convenient.

This new equipment may prove useful to a large group. ranging from enthusiasts on soil respiration and climate issues to institutions like the Soil Conservation Service of Iceland and the Agricultural University of Iceland.

Ólafur says that the device has been tested in short term measurements with excellent results, and he hopes that an even more efficient version may be developed.

“We have shown that cheap devices that can perform well over shorter time periods can be developed. The next step is to develop one that can operate throughout the year and gather information in real time from a large area. “

Thus, the overall emissions from different areas over a whole year could be monitored, and variations between years and seasons observed. Ólafur hopes to be able to try this out next summer.

The reason for these excellent results is the collaboration between the University of Iceland, the technical studies centre (Tæknifræðisetur), the Technical College, the Agricultural University and the Soil Conservation Service according to Ólafur. “The key is to gather groups of people with a broad range of knowledge.”