Ármann Höskuldsson is among the best known earth scientists in Iceland and often acts as a media spokesman in the event of a volcanic eruption or earthquake. Earthquakes are a serious phenomenon and so it is important to monitor the situation continuously. They are not only dangerous in and of themselves, but sometimes signal an imminent volcanic eruption.

In recent months, seismic activity on the Reykjanes peninsula has been more significant than normal and few places in Iceland have been monitored so closely. The most dramatic seismic activity has been taking place around the mountain Þorbjörn, near Grindavík. Naturally, people are alarmed by earthquakes in this area. Almost right at the foot of the mountain are towns, harbours, industrial structures and major roads, as well as the largest airport in the country that guarantees air traffic to and from Iceland.

The goal of monitoring on the Reykjanes peninsula and in other places is to measure movement at fault lines and plate boundaries, which does not necessarily have to be related to volcanic activity. These measurements also evaluate the accumulation of magma inside volcanoes. There are a lot of volcanoes on the Reykjanes peninsula, although most of them have been inactive for the last century – there are lava fields on the peninsula, though, dating from eruptions shortly after the settlement.

Mapping hazards on the Reykjanes peninsula

Ármann, who is a scientist and research professor at the University of Iceland, is now part of a team researching the risk from earthquakes on the Reykjanes peninsula, not least where signs of magma accumulation have been detected. Earth scientists have various weapons in their arsenal to measure and evaluate such things. For example, they look at seismographs, which we often hear mentioned on the news, tectonic deformations such as uplift, and also volcanic gases which can indicate an influx of magma into the Earth's crust. There are all kinds of equipment for these purposes, but recently scientists have been using remote sensing and measuring changes and uplift with satellites.

Something else which is completely new is the method of using a range of data to create simulation models, which are then supplied with the data from continuous monitoring as well as numbers taken from geochronological research. Ármann Höskuldsson and his research team thereby take an IT-based approach, where fragmentary data is further developed into comprehensive and reliable predictions.

"We use methods that let us statistically analyse an event based on geological data," says Ármann. "This enables us to determine the most likely site of a volcanic eruption. Using that data, we then use simulation models to evaluate where the volcanic materials are most likely to go from future fissures. Then we can identify the areas of Reykjanes most at risk."

There is no doubt that this is incredibly important research, because if the team manages to map high risk areas, it is more likely that it will be possible to save structures and guarantee the safety of people and livestock. The results could also give an idea of where to build new structures and which areas to avoid.

"The findings of this project were used to identify the most hazardous areas this winter when the earthquakes started near Grindavík," says Ármann, adding that the results were promising and demonstrate the usefulness of the methodology. "After the initial evaluation, the existing information is used alongside new data in order to determine the areas where lava is most likely to emerge, for example."

Ármann likes it on the Reykjanes peninsula, reporting that are ready subjects for research and that it isn't far for scientists to travel from Reykjavík in order to localise and clarify technical issues. "Reykjanes is also the most densely populated volcanic region in Iceland."

Ármann says that his team's methodology is not at all specific to Reykjanes, because similar technology is used in the Westman Islands, the site of the 1973 eruption, the only eruption to take place in an Icelandic town.

The inspiration behind the research dates back a decade when work began evaluating volcanic hazards in the Hengill area. "But the wheels really starting turning," says Ármann, "with the European projects Vetools in 2013 and EVE three years later. Then the methodology became clearer and the computers powerful enough to resolve the issues."

Ármann Höskuldsson led field research into the eruptions at Hekla in 2000, Eyjafjallajökull in 2010, Grímsvötn the next year and was also on duty monitoring Holuhraun from 2014 to 2015. Here is on site at the world famous eruption in Eyjafjallajökull. IMAGE/RAX 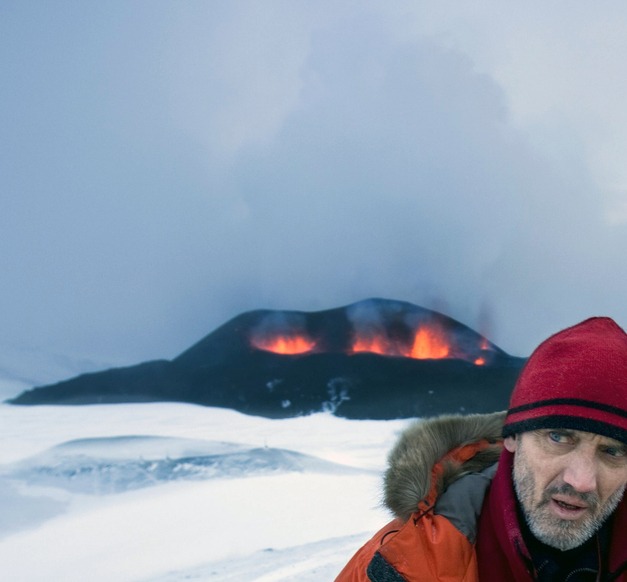 It is fascinating to talk to Ármann about earth sciences, because he personifies almost everything in his environment and often gives his subjects a character of their own. This makes him an effective and popular teacher. He uses everyday language to talk about science.

"What value does this research have for science in general and society as a whole," he says, repeating the question he was asked. "Well, of course, getting to know the land better and all its quirks, that clearly has value for society. With regard to the scientific community, it helps us to better understand activity at the plate boundaries that cross our country and gives us another perspective on volcanic activity in Iceland."

On duty at Holuhraun

Ármann was born in 1960 and has a PhD in volcanology, geochemistry and petrology from Blaise Pascal University in Clermont-Ferrand, France. He has investigated a huge number of volcanic eruptions and their preludes. "I'm interested in volcanic activity in general," he says, "and I want to understand the development of Iceland in the context of the widening of the Atlantic Ocean. When you live in Iceland you can't separate these two factors. A better understanding of these two things also helps us to better understand the risks that we live with on a day-to-day basis in this country."

Ármann led field research into the eruptions at Hekla in 2000, Eyjafjallajökull in 2010, Grímsvötn the next year and was also on duty monitoring Holuhraun from 2014 to 2015.  Many people were waiting with bated breath, afraid that Bárðarbunga, one of the largest volcanoes in the world, would erupt with Vatnajökull in the volcanic crater itself. Luckily the eruption was "just lava" in the best possible location, rather than an explosive eruption causing huge floods, catastrophic explosions and ash on an almost unknown scale.

"The eruption at Holuhraun was a typical extension event, where magma seeks a way up to the surface, fills fissures that form in the top layer of the crust, and forms lava on the surface. The interesting thing about that was to see how the magma first came to the surface east of Bárðarbunga and then followed the extension of the fissure to the north. The Earth's crust ripped like a piece of paper," says Ármann.  Scientists learned a lot from the event and of course, the paramount goal of Ármann and other earth scientists is to learn lessons from past events in order to guarantee public safety in Iceland in the future.

"We want nothing more than to help with all the decisions that need to be taken when there are earthquakes and volcanic eruptions."