Humpback whales unexpectedly remain near Iceland all year round

Edda Elísabet Magnúsdóttir, adjunct lecturer at the University of Iceland

Whales have probably always fascinated humans due to their incredible size, their mysterious lives in the depths of the sea, and their unusual intelligence. These things have made whales important to the tourist industry, as well as an inspiration to writers. Many have been thrilled by the tale of Moby Dick, the enormous white whale who dragged his hunters deep below the waves.

But whales are also of interest to scientists, including Edda Elísabet Magnúsdóttir, adjunct lecturer at the University of Iceland. Scientists look at whales from a very wide range of perspectives, and Edda Elísabet's research focuses on the behaviour of the animals.  Whales have undoubtedly been living in the sea around Iceland for thousands of years and have been considered a resource ever since the settlement. It is likely that the settlers of Iceland were able to hunt whales, since there is considerable mention of whales in ancient sources. 17 Icelandic Sagas include descriptions of the relationship between humans and whales in the early years of the settlement period. 'Beached whale' is still a term in Icelandic used to refer to a great windfall – in the old days it would have meant an entire larder of food washing up on the beach. The way people used a beached whale, therefore, was once of critical importance and the Jónsbók law codex of 1281 contains a section discussing beached whales. Incredibly, these ancient laws on beached whales still form the basis of current law in Iceland.

Mammals who have adapted to life in the sea

Whales are mammals who are extremely well adapted to life in the sea and can be divided into two categories: baleen whales and toothed whales. There are around eighty species of whale and scientists believe they are probably descended from a common ancestor who returned to the sea 55 million years ago.  Whales can range from just under one and a half metres long and roughly 50 kilos up to 34 metre long, 190 tonne behemoths like the blue whale, the largest animal on earth. The humpback whale, the subject of Edda Elísabet Magnúsdóttir's research, is no shrimp either. Humpback whales often exceed 13 metres in length, with the female weighing up to 40 tonnes and the male a little lighter, but still up to 35 tonnes. Humpback whales are also our superiors when it comes to longevity, able to reach almost a hundred years old entirely without medical care.

"My research focuses on the behavioural ecology of humpback whales with regard to their lives in the North Atlantic," says Edda Elísabet. "I will seek answers to the questions of why humpback whales seem to live around Iceland all year long, what they do during the winter darkness, what their physical condition is at this time of year and other times, whether they can potentially breed here, and what their preferred diet is."

Humpback whales have been classified as migratory animals, since they can be found in all the world's oceans, from the equator to the edge of the polar ice. They do not venture under the ice because, as most people know, they need to surface to breathe. According to scientific theories, humpback whales are supposed to stay in cold waters like the sea around Iceland to feed in the summer, but migrate like the birds to warmer climes in late autumn or early winter to breed. Edda Elísabet has a different, and exciting, story to tell.

"The migratory behaviour of humpback whales observed around Iceland contradicts what scholars have claimed about this species and it appears that we are witnessing behavioural changes," she says. "This knowledge will play a significant role in our understanding of the whales' intelligence in adapting to changing environmental circumstances, as well as their role in the Icelandic marine ecosystem on a year round basis."

Discovered changes in humpback whale behaviour during her PhD

During her PhD, Edda Elísabet began researching the presence of whales around the coast of North East Iceland throughout the year using sound recording devices. "Using the recordings from those three winters, I discovered that humpback whales remained here throughout the winter, singing day and night. The bull humpback whales sing during the winter breeding season at the southern breeding grounds and this behaviour has therefore been linked with the breeding process," says Edda Elísabet.

Her doctoral thesis thus took a new direction and is now entirely focused on the singing behaviour of humpback whales in their habitats around Iceland. "What was missing was further investigation of what they were doing, other than singing. Questions such as what individuals are these, are they sexually mature, are the females also singing, and do they then have the potential to breed. Is Iceland a breeding ground? It became clear that these questions demanded an answer, since the findings of my PhD project indicated humpback whales living different lives than we have previously been aware of."

"My current research is providing new knowledge of the behavioural ecology of large whales, involving behavioural adaptation to changing environmental conditions. This knowledge provides us with a better insight into the potential of large whales in general to adapt their breeding and feeding strategies to their environment. The research also provides much more accurate knowledge of the role of humpback whales in the Icelandic ecosystem and the feeding habits in our oceans," says Edda Elísabet. 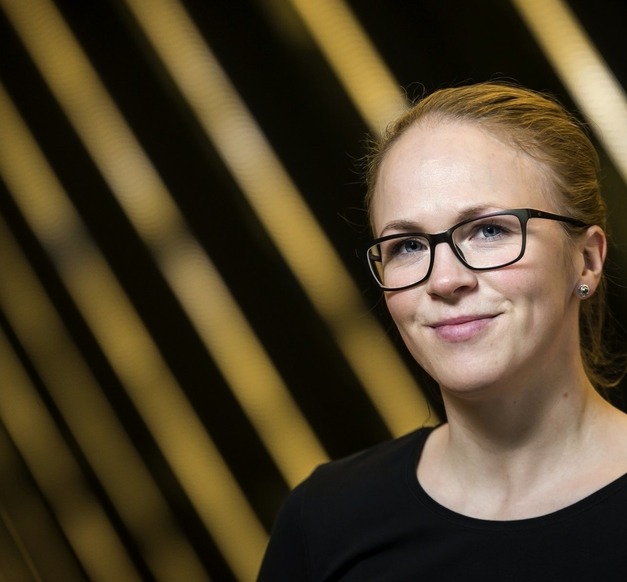 "My enthusiasm for whale biology is certainly unwavering, but our knowledge, particularly here in Iceland, is extremely limited and we need to find out more. Whales are a challenging subject and definitely not the easiest animals to research. But technology is advancing, enabling us to do more than we could a few years ago. In my PhD project, we uncovered new knowledge of a whale species that in recent years has become ever more prevalent around Iceland. Humpback whale numbers are probably rising around Iceland and it is therefore imperative to understand this species and its role in the Icelandic marine ecosystem."

Edda Elísabet says that her research is in the early stages and she is therefore just beginning to collect data. She will collect biological specimens from humpback whales across all four seasons. "The biological specimens, skin and fat, will provide information on sex, fertility, whether they are under physical strain, and what they are eating," says Edda Elísabet.

This winter, special recording devices will be attached to the whales using suction pads that stick to the animals for 24 hours before falling off. "This device will record all the whale's movements and sounds for a 24-hour period. We will also observe the whales' behaviour from the surface and photograph tails and dorsal fins, enabling us to visually distinguish between the animals. In this way we will significantly deepen our understanding of the behavioural ecology of these whales."

A prolific scientist with a passion for nature

Despite her young age, Edda Elísabet is an astonishingly prolific scientist and a popular teacher with a talent for engaging children in science. She has taught for many years at the University of Youth and with the Knowledge Train, which travels across Iceland to entertain and educate children. Besides her research into marine mammals, she is also an entrepreneur having worked on innovation projects aiming at providing information on whale sounds to tourists in the form of an audio book.

"My current research is providing new knowledge of the behavioural ecology of whales, involving behavioural adaptation to changing environmental conditions. This knowledge provides us with a better insight into the potential of large whales in general to adapt their breeding and feeding strategies to their environment. The research also provides much more accurate knowledge of the role of humpback whales in the Icelandic ecosystem and the feeding habits in our oceans. This knowledge is extremely useful for the fishing industry and also the whale watching industry, which is based on educating tourists about these remarkable marine mammals around Iceland," says Edda Elísabet, adding that all research makes up the bedrock of society.

"It doesn't matter whether the research is in the natural sciences, the social sciences, the humanities, the arts, or any other field. Through research, we support innovation and add value, as well as improving our understanding of all the subjects tackled."

Edda Elísabet says that in the case of research in the natural sciences, we are collecting important data that enables us to manage natural resources in ever more intelligent ways. "This has never been as urgent as it is today," she says with a frown. "We have squandered the earth's resources and caused considerable damage to the natural world, for example in the form of pollution, habitat destruction, introduction of certain non-native species and rising global temperatures. We can see the consequences in the form of a mass extinction event, the sixth since the emergence of life on earth. Research helps us to know more and makes us more capable. This gives us the opportunity to turn things around and combat the chain reaction of damage that is now sweeping the planet."