Abstract:
The extent of compositional and lithological heterogeneity in Earth’s convecting mantle, caused by the recycling of oceanic and continental lithosphere, has long been a subject of interest to geochemists and geophysicists. A fundamental outstanding question that is still widely debated is: how is recycling of crustal material preserved in ocean island basalts?

Olivine is usually the first mineral to crystallise during the ascent of mantle-derived melts and is stable over a large range in pressure, temperature, and melt composition. Because of this, the chemistry of olivine is often used as a proxy for primitive melt compositions prior to secondary modifications occurring in the uppermost part of the mantle and the crust. Iceland is the largest subaerial section of the global mid-ocean-ridge system and reflects the current location of the Iceland mantle plume. Previous work has shown that the mantle beneath Iceland is chemically heterogenous, and this has been attributed in part to the presence of recycled crust entrained within the upwelling plume. The recognition of a chemically heterogenous plume, together with the widespread occurrence of primitive basalts, makes Iceland an ideal location to identify the properties of recycled crust in a mantle plume from the chemical composition of high-forsterite olivine.

This thesis is in three parts where I present a detailed study of high-forsterite olivine from the active rift and flank zones as well as older crust in Iceland. I apply a combination of in-situ and bulk digestion analytical techniques to produce an internally-consistent, high-precision dataset for distinguishing mantle-derived variability from the effect of secondary processes, such as fractional crystallisation and assimilation. In the first part of the thesis, I use minor and trace elements in olivine and previously published He isotopes to show, that the geochemical heterogeneity beneath Iceland is mainly caused by the Iceland plume entraining pyroxene-rich mantle components, formed from recycled oceanic crust. In the second part, I use oxygen isotopic ratios in the same olivine crystals to show, that the amount of entrained recycled crust has increased since the initiation of the plume (~ 60 Ma). This is related to an increase in plume flux and melt production, which was likely facilitated by the coincidence of the Iceland mantle plume and the North Atlantic Rift starting at ~ 25 Ma and resulted in the formation of the Iceland plateau around the same time. In the final part, I explore the use of bulk digestion methods to determine Mg and Fe isotopic ratios in olivine from the same samples of Icelandic basalts to further assess the nature of this recycled component. Here, I find that variations in Mg and Fe isotopes in Icelandic olivine are mostly controlled by magma transport timescales which, going forward, could enable us to estimate residence times for olivine in the various volcanic regions.

About the doctoral candidate

Maja Bar Rasmussen graduated with a master’s degree in Geology-Geoscience from the University of Copenhagen, Denmark in 2015 with a focus on geochemistry and volcanology.
She then went on to work for the Geological Survey of Denmark and Greenland (GEUS) before moving to Iceland in 2016 to begin her doctoral studies and a NordVulk fellowship. 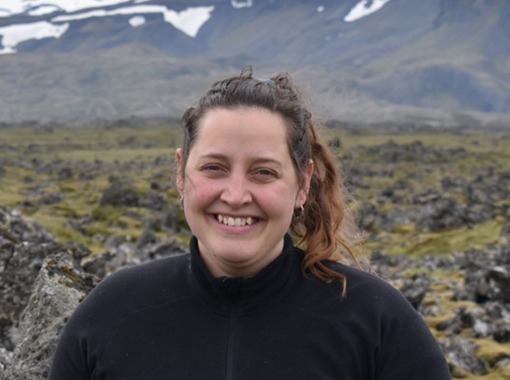