Lupins are extremely prevalent here in Iceland, yet remain a little utilised resource. In other countries, the lupin has been used as food for humans and animals, since it is rich in protein and energy as well as starch. It is considered particularly good for ruminants, as well as pigs and birds. The Icelandic lupin is more bitter than foreign, sweeter varieties and animals have therefore rejected it.

The goal of the research, conducted this summer in cooperation with the Student Innovation Fund, is to find uses for the Icelandic lupin, both in human food and animal feed for farming. The project is an extension of Braga Stefaný Mileris' doctoral thesis. Braga Stefaný started work on a basic analysis of the contents of different parts of the lupin in autumn 2019.

Björn Viðar Aðalbjörnsson, lecturer at the University of Iceland Faculty of Food Science and Nutrition, argues that better use of lupins in Iceland would have a positive environmental impact, since animal feed is currently Iceland's largest import. It would also be hugely profitable since lupins are easy to cultivate in the Icelandic climate.

"We intend to ferment the lupins using various microorganism strains and investigate the effect on their nutritional value and bitterness. We will implement sensory evaluations for products on the consumer market and research their appeal to livestock in collaboration with farmers, looking at how the animals take to it after it has been processed in different ways," says Björn Viðar.

The goal of the research, conducted this summer in cooperation with the Student Innovation Fund, is to find uses for the Icelandic lupin, both in human food and animal feed for farming. The project is an extension of Braga Stefaný Mileris' doctoral thesis. Braga Stefaný started work on a basic analysis of the contents of different parts of the lupin in autumn 2019. From the left: Björn Viðar Aðalbjörnsson, Axel Sigurðsson, Braga Stefaný Mileris and Kristín Elísabet Halldórsdóttir. IMAGE/Kristinn Ingvarsson 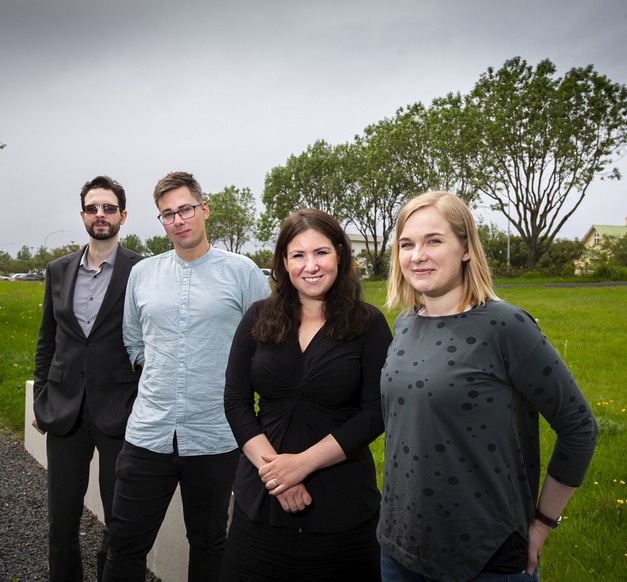 "Our interest was sparked by how political the lupin is – there seem to be two factions. People either love lupins or hate them and with this project we want to approach them from a new angle, since the use of lupins has so far been limited to revegetation of areas depleted of topsoil, or as grazing for sheep. Things can be used if there is a will to do so," they say.

Anyone driving around Iceland cannot fail to notice the Alaskan lupins, but many people don't give them much thought, to the extent that there has been little research and available data about the plant in Iceland. "In many ways, we're inventing the wheel in looking at what options this plant offers for human consumption. In other countries, other varieties of lupin are used a lot in human and animal food, as well as methane production, since many of the foreign varieties are rich in protein, fibre and sugars. Lupins here in Iceland are an untapped resource and we have limited knowledge about their chemical composition, bioactive compounds, etc., while the white lupin (lupinus albus) and the blue lupin (lupinus angustifolius) have been researched in more detail. Foreign research indicates that lupins contain a considerable amount of bioactive compounds, for example antioxidants. The lupin is believed to have many health benefits."

Four samples of lupins will be taken at different points throughout the summer and the raw materials divided up into different plant sections. Next, the raw materials will be cleaned and stored in a freezer. The lupins will then be fermented using various different processes and products will be developed for human or animal consumption. Nutritional and bitterness measurements will be conducted before and after fermentation and also on different parts of the plant at all four stages of the growing cycle. The total amount of phenolic, a bioactive compound, will also be measured in each section of the plant in the different growth cycle stages. It is believed that lupins contain high quantities of bioactive compounds, one of which – sparteine – has been used as a drug. According to Axel and Kristín, the project will lead to increased knowledge of the contents of lupins and their bioactive compounds, which will open up opportunities to develop products and make further use of the plant.

However, they don't want to say too much about the kinds of products they have in mind. "Due to our future plans, we are choosing to say as little as possible but we can vouch for the fact that the initial research has yielded very promising results which we intend to pursue further. You might say that the project is just getting started."