The roars of harbour seals around Iceland occur less frequently and last longer during mating season than those from the harbour seals around Denmark and Sweden. This may be to avoid predation in their environment. These are among the results of a new study from research scientists at the University of Iceland's Institute of Research Centres, the Icelandic Seal Centre, Marine and Freshwater Research Institute, University of Southern Denmark, and Aarhus University in Denmark. The results are published in an article in the latest issue of the Scientific journal JASA Express Letters.

Harbour seals mate underwater, but details of their mating behaviour remain unclear, however, during the mating season underwater calls are produced, presumably by males. The aim of the study was to compare harbour seals' mating roars in Iceland to those in Denmark and Sweden and to what extent roar structures vary due to predation levels.

The article points out that the Icelandic harbour seal is genetically distinct from other North Atlantic seals with little or no exchange with other populations. Orcas and gray seals are present in Icelandic waters, making it likely that roars may be shaped to reduce predation risk and thus differ from areas with little predation pressure in Danish and Swedish waters.

Two self-contained underwater sound recorders were used two record the harbour seals’ roars during assumed mating season in two study sites (Heggstaðanes and Illugastaðir) in the North West of Iceland, where 9% of the total Icelandic harbour seal population (approximately 9400 animals) occurs. The roars were then compared to the roars of harbour seals at the West coast of Jutland in Denmark and Kalmarsund in Sweden.

The study is based on the master’s project of Helen Rössler at the Faculty of biology at the University of Southern Denmark, and is handling the recording gear in the photo. 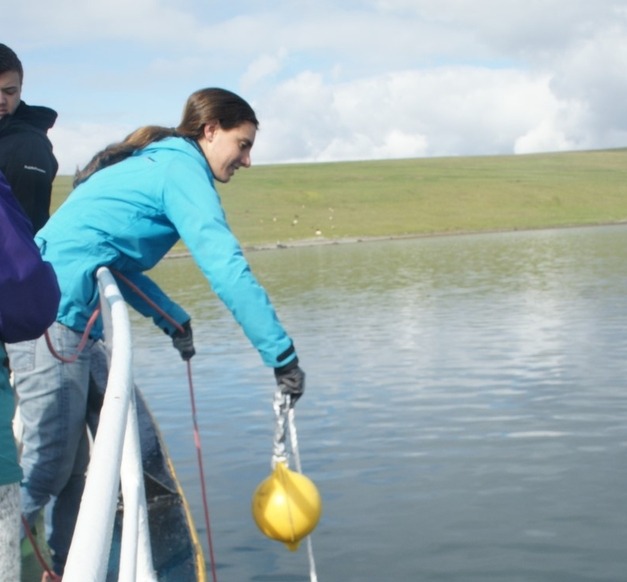 Roars of Icelandic harbour seals are longer and lower

All detected calls were recorded at Heggstaðanes, not Illugastaðir, and only early in the recording period. For comparison, the scientists heard calls from harbour seals the entire mating season and in various places where recordings took place in Denmark. The comparison of the recordings also revealed that the roars of the Icelandic harbour seals were longer and lower than the roars of their cousins by the coasts of Denmark and Sweden. Also, studies from Scotland and the east and west coasts of North America indicate that harbor seal vocal displays are usually easy to detect and recognize during the breeding season. Icelandic harbour seals thus appear to be more silent during the mating period than other populations.

Some of the differences in call parameters, such as the lower source level and longer duration of Icelandic calls, could also be explained by an adaptive strategy to avoid predation. Predators, such as gray seals or orcas, are much more prevalent in Icelandic waters. By lowering the source level of their calls, the Icelandic seals may be able to pursue their underwater acoustic displays without revealing themselves to predatory orcas.

The research scientists intend to take the study further to increase knowledge in the field. Research on the mating behaviour, including communication with sound, among harbour seals is important as it increases knowledge and provides details of timing and important location of mating seasons. Such knowledge is a vital link in future management and preservation of the Icelandic harbour seal.

The article can be found on the JASA Express Letters website.