A digital journey through the land of the Sagas

"There was a man called Mord Fiddle, who was the son of Sighvat the Red. Mord was a powerful chieftain, and lived at Voll in the Rangriver plains." These are the well-known opening lines to the famous saga “The Story of Burnt Niall”. Less known, however, is where exactly the Vale is in Iceland. No need to despair as you can find out with a few clicks on a new interactive Icelandic Saga map.

“The Icelandic Saga Map is a digital map where all texts from the Icelandic Sagas are mapped out, coordinated and connected to a map. The main purpose is to give people a new approach to the Sagas and connect literature to real landscape or places“, says Emily Diana Lethbridge, post doc at the UI Centre for Medieval Studies and creator of the website.

Lethbridge had the idea for the map whilst travelling around Iceland in 2011, when she visited historical sites and wondered about the connection between the Sagas and the landscape. “I especially noticed that the Sagas overlap considerably when you consider their location and the distribution of sites where the Sagas took place; I wanted to find a way to show that,” she says.

“The Icelandic Saga Map is a digital map where all texts from the Icelandic Sagas are mapped out, coordinated and connected to a map. The main purpose is to give people a new approach to the Sagas and connect literature to real landscape or places“ 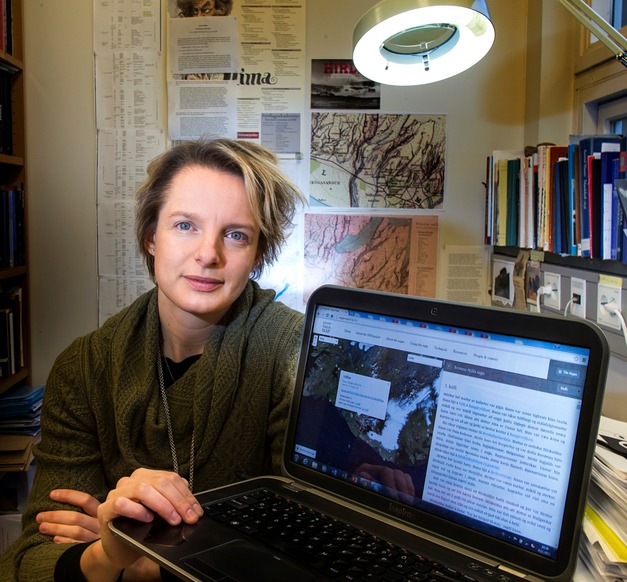 It only took a few years to create the map and make it accessible. However, Lethbridge is by no means finished. “The process of entering The Book of Settlements (Landnámabók) in the database has recently begun, and the shorter stories known as “Íslendingaþættir”, will be added in the future. Other medieval literature will be added: Sturlunga, the Bishops’ Sagas (biskupasögur), and finally from more recent times the travelling journals of those who visited Iceland in the eighteen hundreds to see the historical sites”. Furthermore, she hopes to be able to make an English version of the map.

According to Lethbridge the scientific value of the project is partly the connection of literature to real landscape or “real places” and the argument is that the places themselves can contribute to preserving the Sagas. She believes that the map will prove useful to a wide audience, such as schoolchildren, enthusiasts, families, and travel companies. “The role of the Sagas in Icelandic history and as a cultural heritage is very important and all attempts to communicate them outside of the academic world are extremely valuable”, she concludes.

The project is funded by Rannís, the Icelandic Centre for Research, and supported by the University of Iceland Centre for Medieval Studies and the Árni Magnússon Institute for Icelandic Studies.