Thirty years after being introduced to climate science and climate changes for the first time, Julius Solnes, Professor of civil and environmental engineering (emiritus) at the University of Iceland, has published a book, in which he offers a comprehensive discussion of this greatest challenge presently facing mankind. The book is called ”Global Warming: Cause – Effect – Mitigation“, and was published by Amazon.com earlier this year.

In his book, Julius discusses among other things the so-called Energy Imbalance of the Earth system, and the Global Carbon Budget- the carbon circulation. The book relates how19th century scientists were able to physically explain how the Sun warms up our atmosphere, and discover the role of the greenhouse gases, primarily water vapour, in keeping us warm. The effect of carbon dioxide in this connection was soon discovered, and that too much of it in the air could lead to global warming. The book also covers the multifarious processes at work, and how scientists regularly measure the strength of greenhouse gases in the air and use various methodologies for monitoring climate changes with observations and gigantic, coupled climate models. Thus, they have been able to assess the serious consequences of climate change, such as ice melting in the polar regions and of land glaciers; extreme weather and environmental changes, for instance forest fires. Moreover, it is described how the international community has addressed the issue of a changing climate, for example by setting up various international treaties, and at the same time various approaches to reducing carbon dioxide emissions is expounded in order to curb unwanted climate changes.

Julius became acquainted with climate issues when he attended the 2nd climate conference of the United Nations in Geneva 1990 as Iceland’s first Minister for the Environment. “At this conference, the newly established Intergovernmental Panel on Climate Change - The IPCC - presented its first Assessment Report (AR1) on the state of our climate. I was fascinated by the many different disciplines and research the report was based on,” he says and adds that encouraged by the First Chairman of the IPCC, the Swedish Meteorologist Bert Bolin, he tried to better understand climate science.

Since then, Julius has watched closely how matters have developed, and both given lectures and written articles about climate issues and weather changes. “I finally wrote a compilation of all these articles for the Journal of the Association of Icelandic Chartered Engineers in 2016. My US friends urged me to continue and write a complete book in English about climate issues and global warming and suggested the Amazon.com publication services. The first, incomplete publication was released in mid-2017, but it took me three more years to finalize the text such that the final version of the book was not ready until mid-2020,” he says about the making of the new book

Knowledge in this area is growing fast.

When asked what the main challenges were in writing the book, Julius says that when he started to write, he realized how little he really knew about climate sciences. “Therefore, the only alternative was to start reading an endless series of books and articles in order to better grasp the subject,” he says, but it may be added that book´s reference list contains about 400 scientific articles, books and book chapters on climate science, all cited in the text.

Then he says that coping with the rapid development of climate science and increasing knowledge was certainly a challenge. “I tried to cover the latest research articles on the topics I was discussing in the book. That often proved to be difficult. When I had completed a certain chapter, covering the latest research results, new articles about the same subject were suddenly published, which I then had to incorporate into my discussion,” he adds. It may be mentioned that Dr Solnes has drawn or redrawn most of the figures in the book himself.

“The big flux, 10 Gigaton of pure carbon into the atmosphere, which is caused by burning of fossil fuel, is the main problem. If this flux is not addressed and reduced, the Earth’s climate will rapidly change for the worse,” Júlíus Sólnes says, who visited the Rector of the University of Iceland, Professor Dr Jón Atli Benediktsson, recently and brought him a copy of the new book. IMAGE/Kristinn Ingvarsson 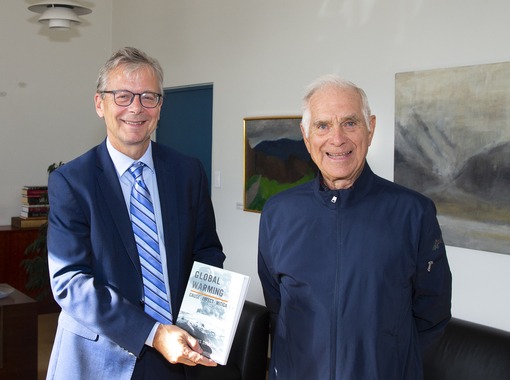 As already mentioned, the book does not only cover the climate change crisis and what causes it, but also discusses possible mitigation measures. “In the chapter that I have called Climate Engineering, possible mitigation measures for reducing the concentration of carbon dioxide in the atmosphere are discussed, with an eye to curbing global warming. The main conclusion is that the only possible way towards preventing major climatic changes is capturing carbon from the exhaust of fossil fuel energy and energy intensive industrial facilities. The technology for doing this is available and well known, but not without considerable cost,” says Dr Solnes.

He says that the Cap and Trade System, which the industrialized countries have come up with to curb the carbon dioxide emissions, is not much better than the medieval Papal Indulgences for absolving us of our sins.“ As the poorer countries are able to sell their emission quotas to the richer industrialized countries, simply because they don’t need them, there has been little or no emissions reduction; it has merely been moved elsewhere,” Dr Solnes adds and does not exempt Iceland from this criticism. “Icelanders thump their chests and brag about the Icelandic energy intensive industry, which uses green energy and purchases emission quotas, so we think it is very environmentally friendly and does not affect the climate with its emissions.

The fact is that the emissions have a dire effect on the climate and makes our effort in dealing with climate change rather half-hearted. We should demand that the energy intensive industrial facilities in Iceland capture all carbon from their smokestacks.”
Julius opines that the public debate on global warming often seems to be barking up the wrong tree, not least when the discussion is about changing the lifestyle of people in Western countries for curbing climate change. “I want to emphasize right away that I am in favour of many ideas that have been proposed, such as eating less meat, planting more trees and many more in the same genre. All such action can only have positive effect on human life and the environment. Unfortunately, these incentives will have very little effect on the climate. I have used the metaphor that it is like trying to kill an elephant by sticking a seamstress’ pin into it, Julius says. 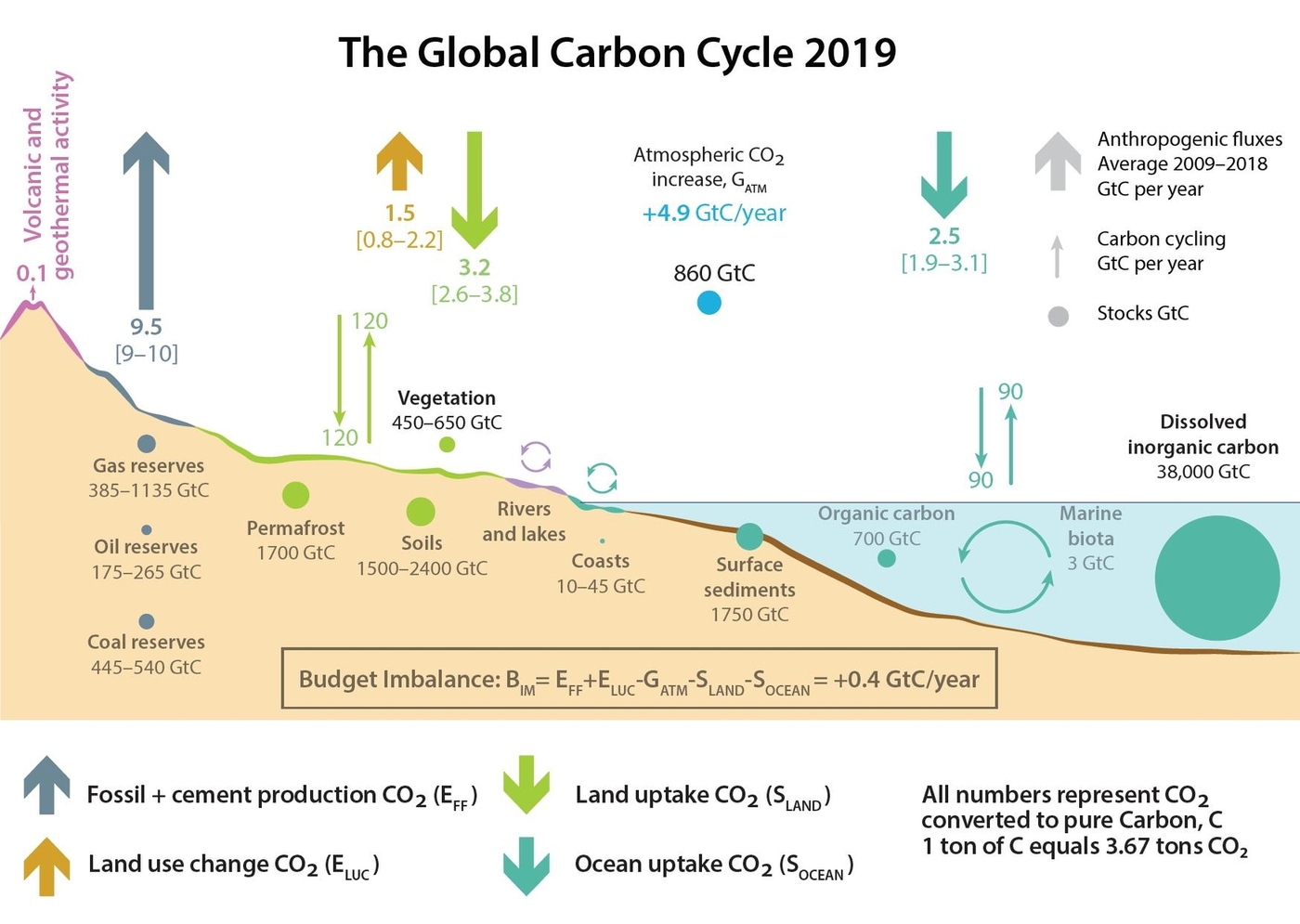 Image showing the global carbon circulation and the contribution of different sources of carbon emission. The figure comes from Dr Solnes’ book.

The largest contribution by far to the global carbon emissions causing global warming may be traced to burning of fossil fuel, mostly in energy production and energy intensive industrial facilities, also in general transport of peoples and goods. Dr Solnes points to two images in his book for verification. “The largest stream, 10 Gigatons of pure carbon released to the atmosphere, which is caused by burning of fossil fuel, is the main problem. If this stream is not addressed in a serious manner, our climate will quickly deteriorate,” he says.

He then points to a table showing the breakdown of carbon dioxide emissions from fossil fuel between the various countries in the world, and international transport (see below). “It is very clear that the large countries like China, the U.S., India and Russia, are the main contributors towards global warming. The European countries within OECD release less than 10% of the global carbon dioxide emissions.   Although we, the inhabitants of these countries, manage to reduce our emission through changing our lifestyle and further restrictive measures, it will not suffice; far from it.” 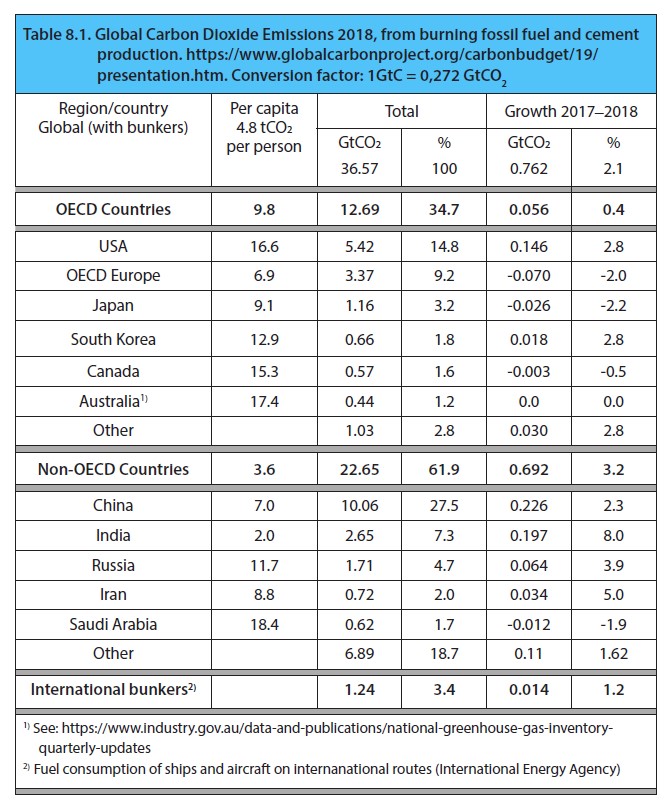 Carbon Dioxide Emissions caused by burning of fossil fuel from countries within and outside the OECD. Image from Dr Julius Solnes’ Book.

Asked how the public debate about climate change has progressed during the 30 years since he attended the United Nations climate conference in Geneva, Julius says that in the beginning there was very little interest in global warming, and very few people bothered to listen. “This has changed gradually. The Paris Conference in 2015 with its big media coverage was a turning point. Also, we owe Greta Thunberg a lot. She has called the young people to arms and made them aware of the climate change threat. Nobody has achieved as much as Greta in making us aware of the dire state of our climate,” Dr Solnes says.

The book “Global Warming: Cause – Effect – Mitigation” is available for purchase on the Amazon web and in the Eymundsson bookstore in Austurstræti. It will also be available in The Student Bookshop in the University Square building within few weeks. 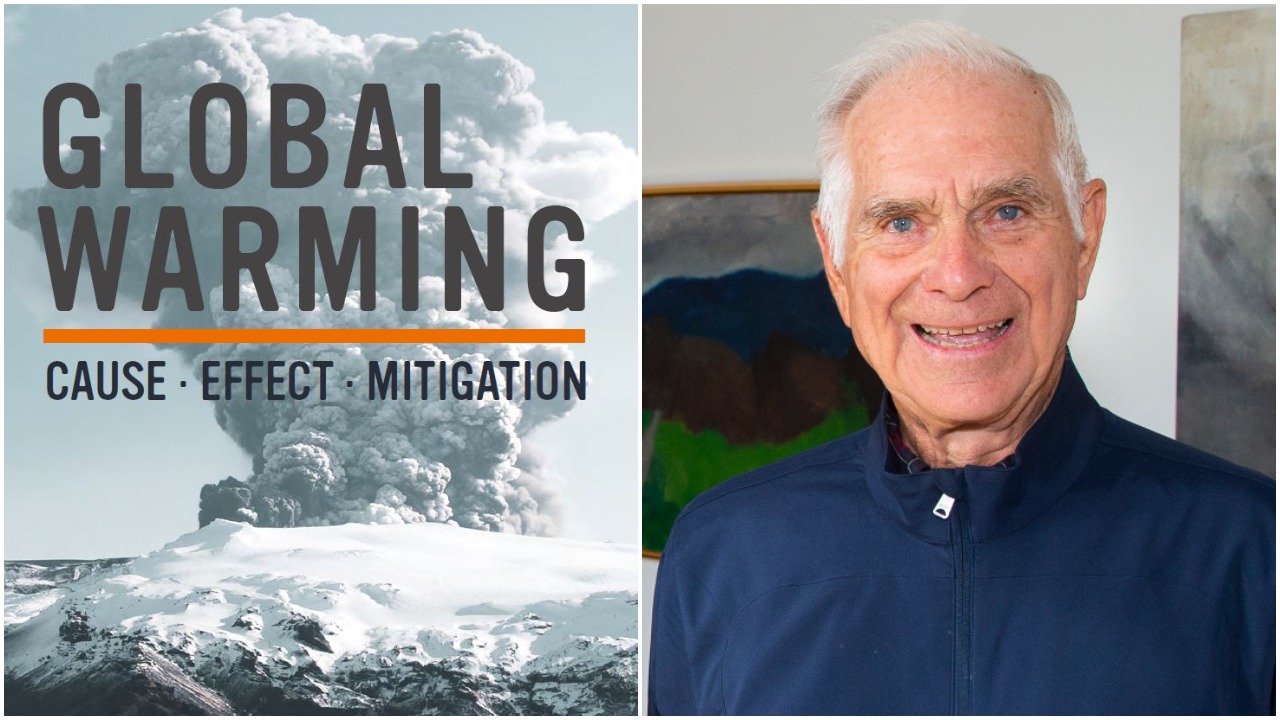