How best to prepare for a landslide from the Svínafellsheiði fracture

"Climate change is contributing to shifts in the magnitude and scale of hazards, and the emergence of risks in areas where they were previously unknown. This calls for risk management at the local, national and international level," says Stephanie Matti, a doctoral student in anthropology, who studies the risks involved in the event of a landslide from Svínafellsheiði in South-east Iceland.

The PhD thesis focuses on risk management, or to evaluate and ways to prepare responses to various threats and opportunities, both in companies, geographical areas, countries or on an international scale. Stephanie places particular focus on best practises in preparing people for unprecedented risks. "Most of the research I have conducted so far focuses on the local level, examining the risk management of the Svínafellsheiði fracture," explains Stephanie

The fracture has been on the news quite often recently. It is located on a steep hill on the plateau above Svínafellsjökull. The locals first noticed the fracture in 2014, and monitoring by earth scientists at the University of Iceland and Icelandic Meteorological Office has shown that the fracture is expanding, and more fractures have been found in the area. "A fracture in the mountainside of Svínafellsheiði in south-east Iceland, threatens to cause between 60 and 100 million cubic metres of debris to fall onto the glacier below, and potentially affect both people and infrastructure," says Stephanie. 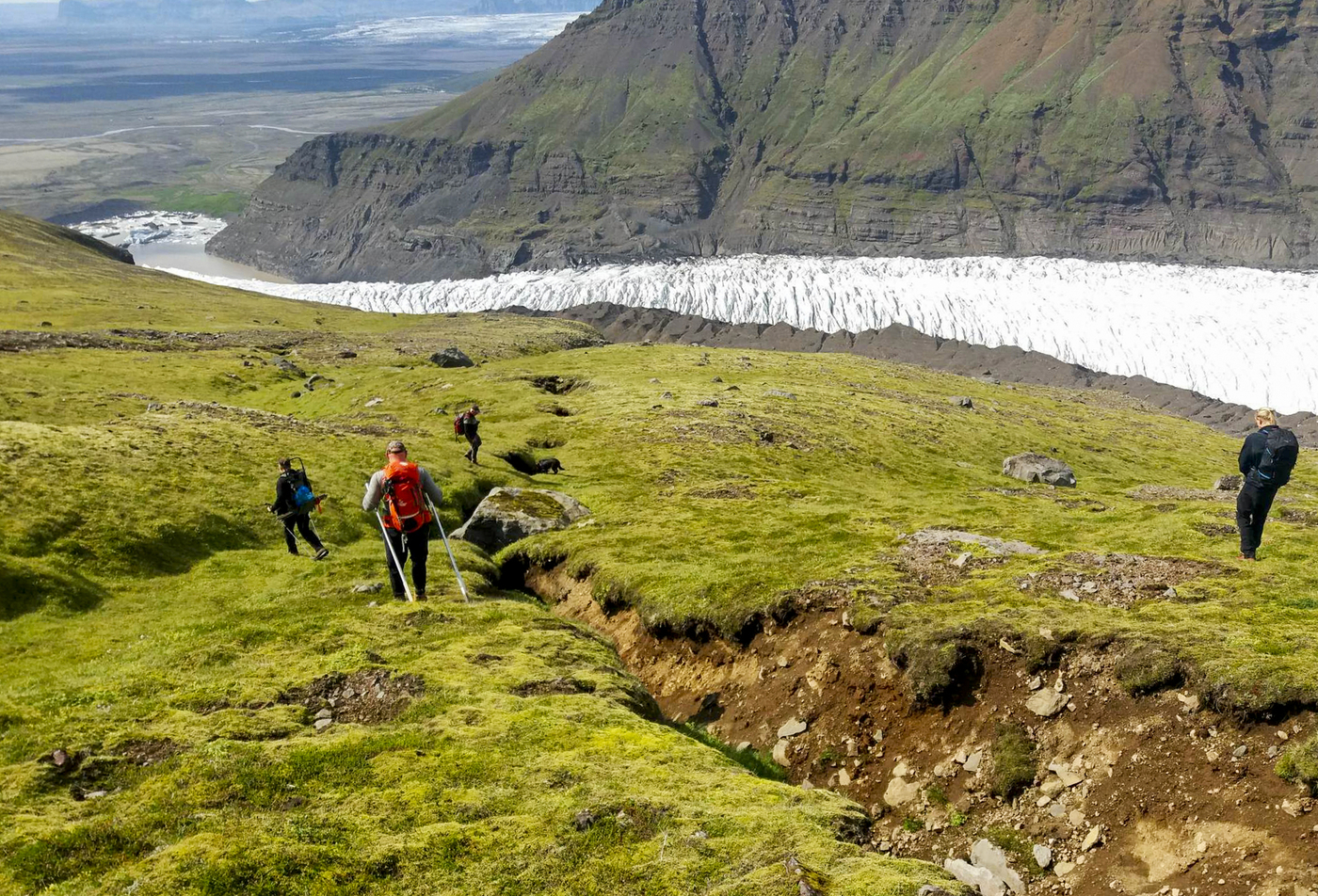 The fracture has been on the news quite often recently and is located on a steep hill on the plateau above Svínafellsjökull.

Svínafellsjökull and the surrounding area has been popular in recent years among tourists with many scenes in the popular series Game of Thrones shot there. "Based on scientific predictions, a landslide from the Svínafellsheiði fracture would be on an unprecedented scale, representing the first time people and infrastructure would be exposed to this type of hazard in Iceland."

As an anthropologist, Stephanie studies the human side of risk. "This involves looking at the role of local knowledge in understanding the risk, looking at the effect that risk management decisions have had on their lives and well-being, and examining on how information about the risk and emergency protocols is being communicated," Stephanie adds. "Going forward, I will turn my attention to the national and international levels where context-specific climate predictions will become increasingly important for disaster risk reduction. I hope to examine how these predictions are currently being used, the key gaps and how these systems can be improved.”

Before starting the PhD at HÍ, Stephanie worked in humanitarian response for six years. This included working the United Nations and different NGOs in Pakistan, Afghanistan, Myanmar and Italy.  It was when she was working for the UN that her interest in climate change-related hazards began. "While I was working with the UN Office for the Coordination of Humanitarian Affairs (OCHA) in Pakistan, there were several flash floods caused by outbursts of glacial lakes in the Himalayas in the north of the country.  The rapid onset left little time for warnings or evacuations, leading to high mortality rates—over 150 people died—and the areas sustained large-scale infrastructure damage," says Stephanie and adds that neither the government nor humanitarian sector were adequately prepared for this level of hazard. "There are over 5,200 glaciers in the area. It is not surprising then that these glacial floods represent a very real threat to local communities and the risk is set to increase with global climate warming."

Stephanie's original plan was to research the risk management of glacial lake outburst floods in Pakistan, but that changed when she came to Iceland at the beginning of her research. "On an academic level, I had decided to come to Iceland because of the country’s long history managing glacier bursts and other glacial risks. I planned to get a solid foundation in the physical processes at play and anthropological methodologies, before heading back to Pakistan to conduct my research.  But in the first interview I conducted, the interviewee was telling me all about the fracture in Svínafellsheiði, and how it represented a different type of risk to other hazards that had been dealt with in Iceland.  There were these challenging interactions between the large landslide, the glacial surface, and the pro-glacial lake that made the risk particularly complex and difficult to predict."

Stephanie with her colleagues on a research trip by Svínafellsheiði.

And then there was no turning back; “the more I talked with people living and working in the area, and the more time I spent in Öræfi, the more interested I became. There was so much to learn about this particular case for how we manage risks in mountainous and glaciated environments. As a result, much of my research has become focused here in Iceland." She hopes her research here contributes to improvements in risk management for glacial hazards both in Iceland and in other mountainous regions of the world.

I planned to get a solid foundation in the physical processes at play and anthropological methodologies, before heading back to Pakistan to conduct my research.  But in the first interview I conducted, the interviewee was telling me all about the fracture in Svínafellsheiði, and how it represented a different type of risk to other hazards that had been dealt with in Iceland.  There were these challenging interactions between the large landslide, the glacial surface, and the pro-glacial lake that made the risk particularly complex and difficult to predict," said Stephanie. 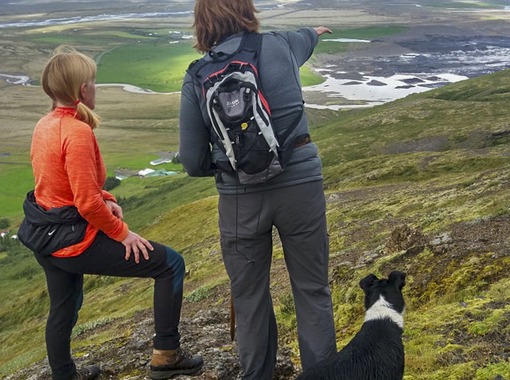 Gathering sheep on Svínafellsheiði for research

Stephanie's study is ethnographic and uses mixed methods including participant observation, semi-structured interviews, and open discussions to gather information from local experience, as well as domestic and international experts. In this way, the community in Öræfi contributes knowledge about the Svínafellsheiði risk and possible responses to it. "I have conducted over 50 interviews with local inhabitants in Öræfi district, foreign tourism employees, scientists, risk managers and tourists," she mentions, adding that most of them were conducted in English. "Hopefully one day I will be able to conduct the interviews directly in Icelandic, but I’m not there yet," she says with a smile.

Stephanie's interest in glaciers and mountains is not only academic as she enjoys hiking both here in Iceland and in the Himalayas. "I conducted active research in the community while working as a glacier guide from April till October 2019.  This experience gave me a more in-depth knowledge of the area and the conditions," says Stephanie who went above and beyond when she became an active member of the Icelandic search and rescue team Hjálparsveit Skáta í Kópavogi.

"I have also been on 12 field trips in the area to participate in specific events affiliated with the research including scientific monitoring missions, formal public risk briefings, and to assist gathering sheep on Svínafellsheiði," she explains. "By drawing on different types of sources I have expanded my understanding of the situation." 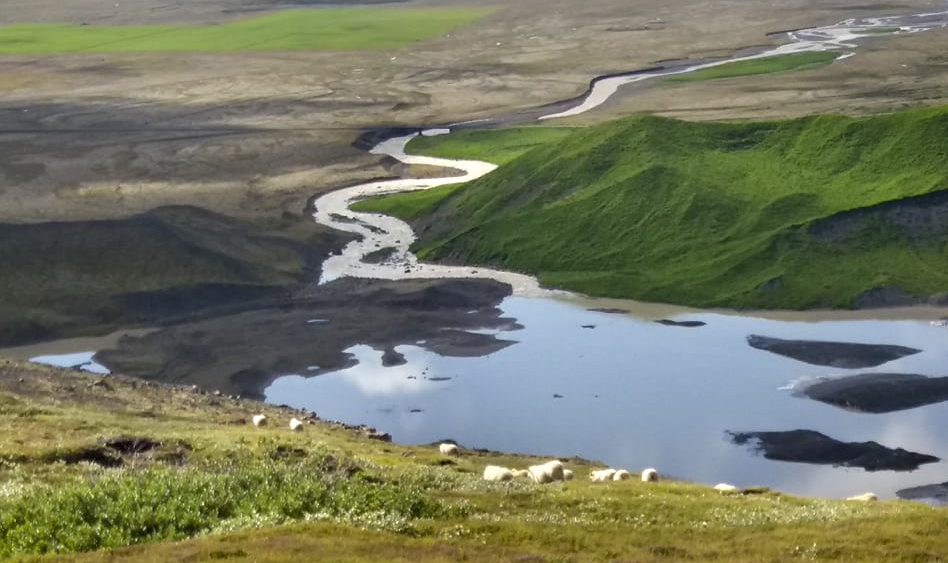 "I have also been on 12 field trips in the area to participate in specific events affiliated with the research including scientific monitoring missions, formal public risk briefings, and to assist gathering sheep on Svínafellsheiði," says Stephanie.

The research project is interdisciplinary, it is thus not surprising that her PhD supervisors have different academic backgrounds. “My supervisor Helga Ögmundardóttir is an environmental anthropologist, who has helped ground my research in the traditions of anthropology. She helped me ground the research in the traditions of anthropology, and push these boundaries with a view to climate issues," says Stephanie. The other members of the PhD committee are: Guðfinna Aðalgeirsdóttir, who is a glaciologist/geophysicist and lead author of the IPCC AR6 Working Group 1 Chapter “Ocean, cryosphere, and sea level change”; and Uta Reichardt, who researches disaster risk reduction with a focus on the role of art and design in preparedness, relief, and disaster recovery.

Local knowledge is important in the management of new risks

Asked about her research findings so far, she responded that they can be broken down into three main categories.  “There is an understanding in the disaster risk reduction and management literature that local knowledge is a critical element of the coping capacity of local communities.  However, it is unclear what the role of local knowledge is when a community is facing a particular type of hazard for the first time.  Our findings indicate that even when a community lacks experience with a specific type of hazard, local knowledge can still play a valuable role in hazard identification and risk management in the area. In the Öræfi area, local inhabitants develop skills and in-depth knowledge of the terrain through sheep gathering practices which, in many ways, act as an unofficial annual land survey conducted by people who have an intimate knowledge of the landscape.  It was no surprise then that the Svínafellsheiði fracture was first discovered by farmers gathering sheep, who brought it to the attention of scientists," Stephanie points out.

Secondly, our results indicate that the no-build zone had both direct and indirect adverse effects on the psychosocial well-being of those affected.  "It caused frustration about a perceived inability to make changes to home and businesses due to no-build zone. Some interviewees felt that their future was in limbo or on hold, and people questioned their future in the area.  These direct psychosocial effects also had a knock-on effect of causing people to talk more about the risk, which meant they were less able to find respite in the routine of daily life."

Stephanie also points out that the risk has an impact on tourism as Svínafellsjökull was for a while one of the most popular tourist sites in glacier tours. "Tourists trust their guides with their safety.  The information they convey can thus have a significant impact on how tourists react. Most tourist guides in Öræfi are not-Icelandic, whereas the Icelandic inhabitants remain the basic unit on which the risk management system in centred.  This has consequences for how exposure was initially calculated, and how risk and emergency protocols are communicated with people living in exposed areas." 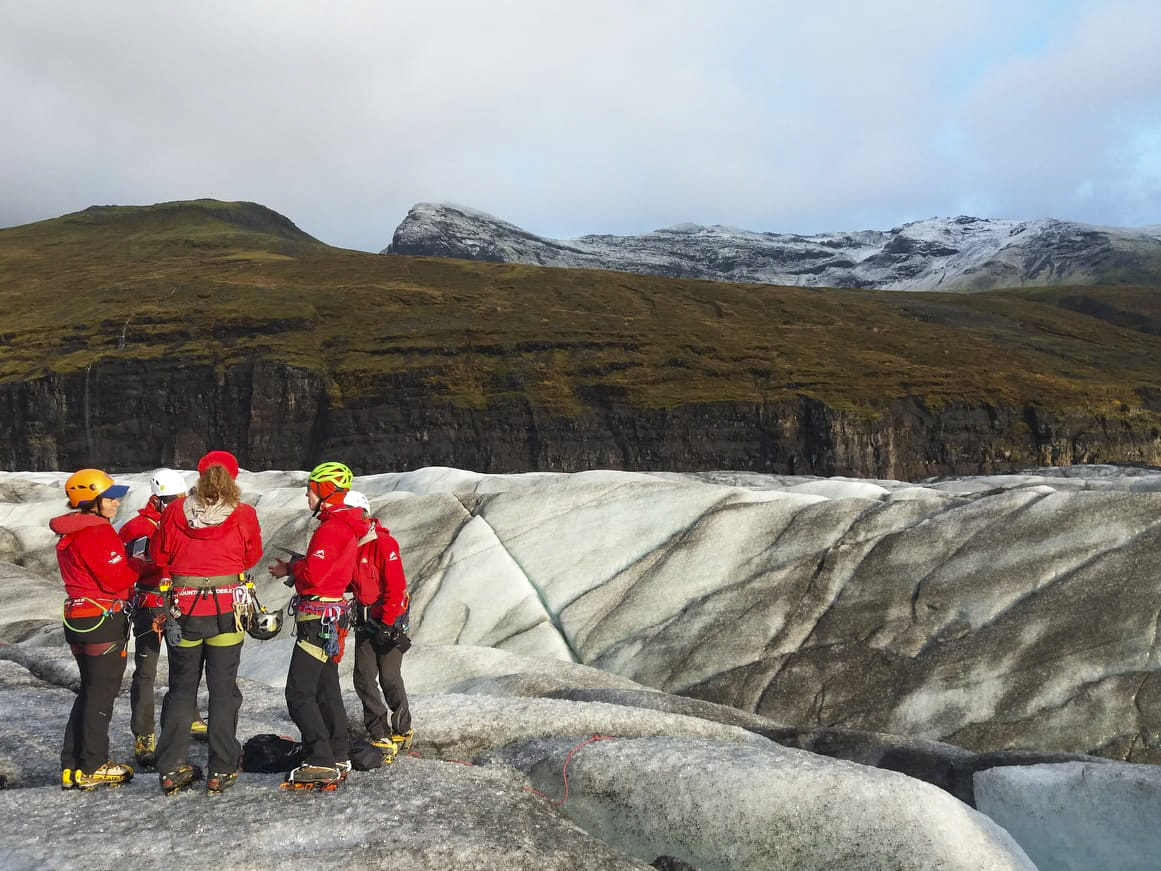 Svínafellsjökull and the surrounding area has been popular in recent years among tourists.

Specific recommendations based on research

As research scientists at the University of Iceland have shown, glaciers in Iceland are retreating fast due to global climate warming, creating an increased risk of landslides. It is thus increasingly important to map the danger and risk protocols in such areas according to Stephanie.

"Our research points to positive steps and areas for improvement in the risk management processes.  Our findings involve specific recommendations for policy makers and the government. For example: expand participatory risk communication engagement with foreign inhabitants, provide written protocols and information that can easily be shared between people in the community rather than relying on word-of-mouth, and integrate consideration of psychological well-being into land use planning," says Stephanie on the the scientific and public value of the results.

She notes that there is need for more research in these fields, and that there is a certain level of novelty in her study from a scientific point of view. "Most studies on local knowledge have focused on developing countries, and none have focused on the role of local knowledge in unprecedented hazards.  This research is really pushing our understanding of risk management forward on a number of fronts." 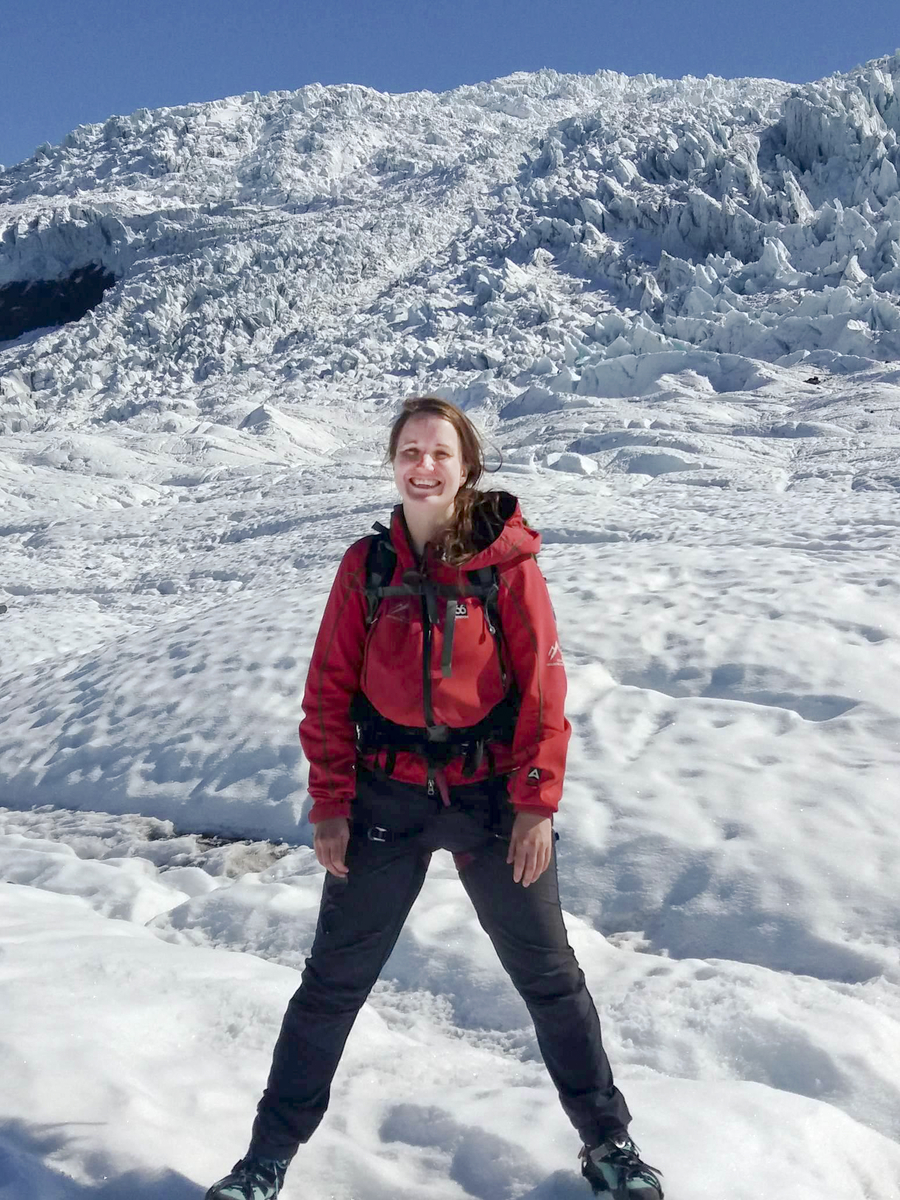