Fagradalsfjall eruption unusual in many ways compared to other eruptions

The precursors to the eruption at Fagradalsfjall last year were unusual compared to many other eruptions across the world and the composition of the lava changed as the eruption continued. These are among the findings of two papers published in the latest issue of Nature by scientists at the University of Iceland and the Icelandic Meteorological Office along with a large number of colleagues. Scientists in Iceland closely observed the seismic activity on Reykjanes Peninsula in SW-Iceland, which began in December 2019 and culminated with the eruption which began on 19 March 2021 and continued for around half a year. An extensive network of measuring stations and the proximity with towns in southwest Iceland enabled scientists to follow developments very closely. This was the first eruption on the Reykjanes Peninsula after 800 years of dormancy.

One of the papers published in Nature today is entitled "Deformation and seismicity decline before the 2021 Fagradalsfjall eruption". It discusses the precursors to the eruption and how they differ from the precursors of many other eruptions around the world. This paper was produced by a team led by Freysteinn Sigmundsson, research scientist at the Institute of Earth Sciences, University of Iceland, and Michelle Parks, specialist in volcanic deformation at the Icelandic Meteorological Office. The team also included many other scientists at the Institute of Earth Sciences, the Icelandic Met Office, Iceland GeoSurvey and other institutes in the UK, New Zealand and the Czech Republic.

As most people in Iceland will remember, there was a significant earthquake activity on the Reykjanes Peninsula in the weeks leading up to the 2021 eruption. This period was marked by tectonic stress release in the crust. However, for several days before the eruption, deformation and seismic activity declined in the area around the eruption site. This precursory pattern is different compared to precursors to many other eruptions around the world, which often show escalating rates of ground displacement and seismicity shortly before the eruption onset, as the magma forces its way to the surface.

The scientists behind the paper explain that the behaviour at Fagradalsfjall is caused by the interplay between magma flow and plate tectonic stress. As magma forces its way through the crust before an eruption, tectonic stress may be released, causing earthquakes and ground deformation in the early stages. A decline in seismicity and deformation may indicate that this process is coming to an end and that the magma may erupt. 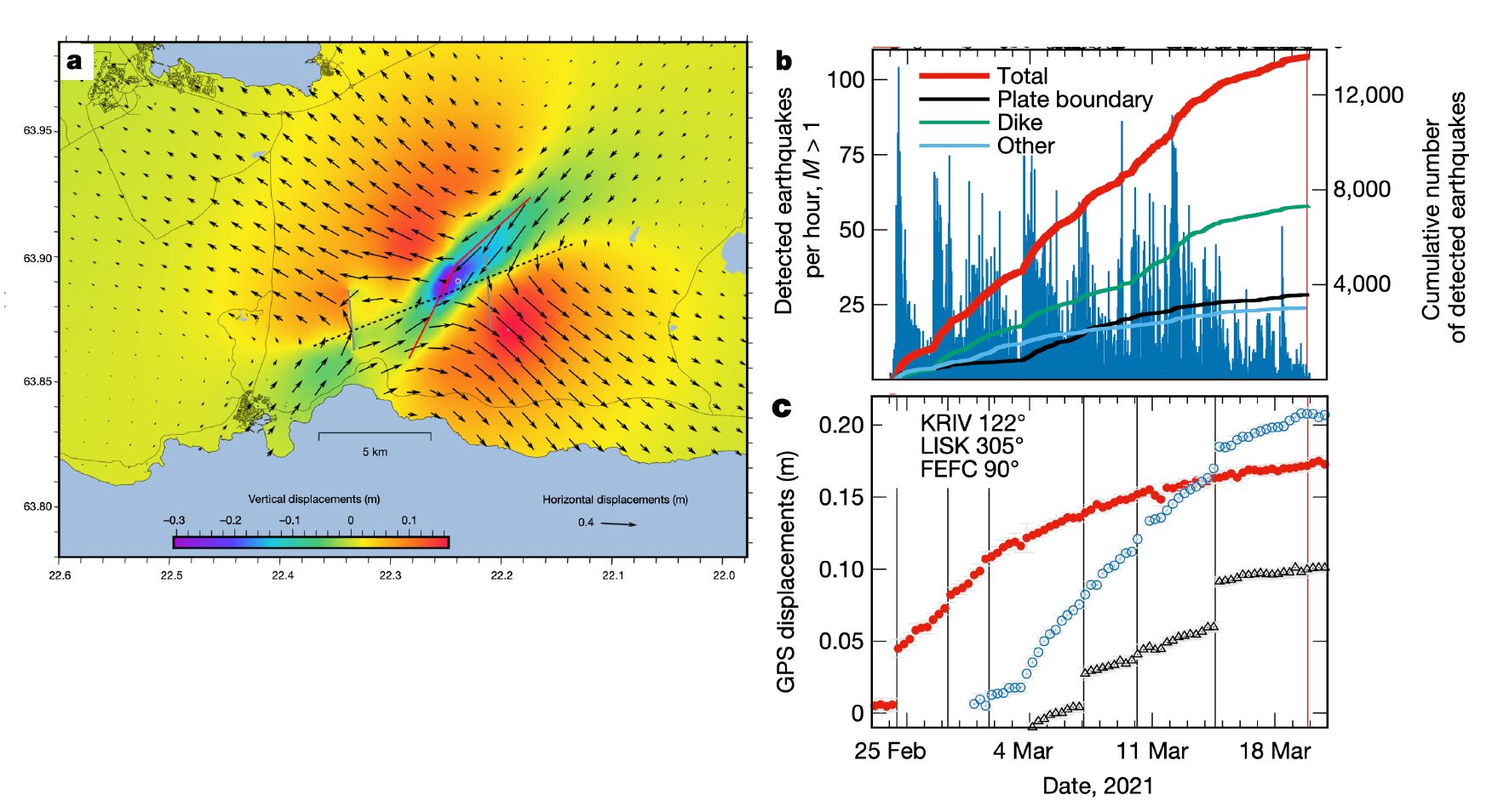 Ground deformation and seismicity preceding the eruption that began 19 March 2021. a) Model of deformation 24 February – 19 March, showing horizontal displacements as arrows and vertical displacements with a colour scale. The red line shows the location of the dyke and the broken black line shows the central axis of the plate boundary b) Hourly earthquake rate (blue) and cumulative number of earthquakes (red line for entire area of research).
c) Records of displacement from three GNSS stations. Ground displacements slow down as the unrest continues, and seismicity declines in the days immediately before eruption onset. From paper by Freysteinn Sigmundsson, Michelle Parks, et. al.

During the roughly three-week period preceding the eruption at Fagradalsfjall, there was both considerable surface deformation and a large number of earthquakes. This was caused by the emplacement of a vertical magma-filled dyke between the surface and a depth of 8 km. At the same time, tectonic stress in the crust was released. Earthquakes occurred in nearby areas, up to magnitude 5.6.

The scientists suggest also that the decline in seismicity in the days before the eruption could be explained by the fact that the magma had then almost reached the surface, where the crust is weakest and there is therefore less resistance.

These findings are internationally significant and may help volcano observatories around the world to interpret observations of volcanic unrest. The research also shows that consideration must be given to the relationship between volcanoes and tectonic stress in eruption forecasting. A release of tectonic stress followed by a decline in deformation and seismicity rate may be a characteristic precursory activity anticipated for a certain class of eruption.

It is extremely unusual to see two papers from scientists in Iceland published in the same issue of Nature, since it is a very competitive outlet that maintains remarkably rigorous academic standards. This achievement therefore highlights the extremely strong position of earth science research in Iceland in an international context. Image/Kristinn Ingvarsson 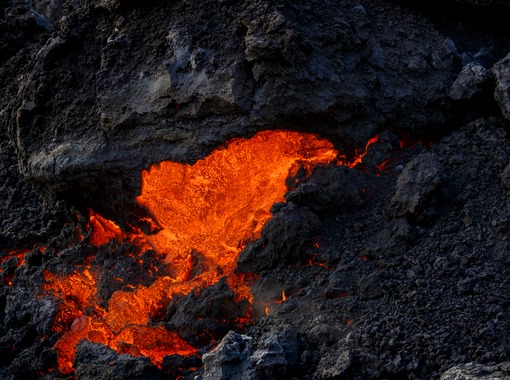 The second paper, entitled "Rapid shifting of a deep magmatic source at Fagradalsfjall volcano, Iceland" discusses the changes to the composition of the lava that flowed through Geldingadalir and the surrounding area as the eruption continued. Sæmundur Ari Halldórsson, research scientist at the University of Iceland Institute of Earth Sciences, led the investigation, which was carried out by a large team of researchers, from the University of Iceland, the Icelandic Meteorological Office and prestigious institutes in France, the USA, the UK, Sweden, and Italy.

The team's analyses soon revealed that the lava at Fagradalsfjall was directly sourced from a magma reservoir at great depth, at the boundary between the crust and the mantle – the near-Moho zone. Eruption directly from the near-Moho zone has not been observed in other eruptions that have been the subject of focused investigation in real time. In these previous cases, the magma has come from shallower levels in the crust. Until now, there has therefore been a lack of information about the deepest parts of magmatic systems, but the eruption at Fagradalsfjall has provided the scientific community with new knowledge of the processes involved.

At the start of the eruption, the lava was relatively rich in magnesium in comparison with lava from other historical eruptions in Iceland, indicating an unusually hot magma supply. There was also a lot of carbon dioxide in the volcanic gases emitted from the eruption vent, indicating an unusually deep magma supply. The scientists explain that this suggests that the magma underwent little cooling on its way up through the crust to the surface. The use of different geobarometers, that measure the equilibration pressure and temperature of the magma and its crystals, suggested that the eruption was sourced from a magma reservoir close to the crust-mantle boundary, around 15 km from the surface. This means that the eruption was fed by something like a high-speed link direct to the mantle. 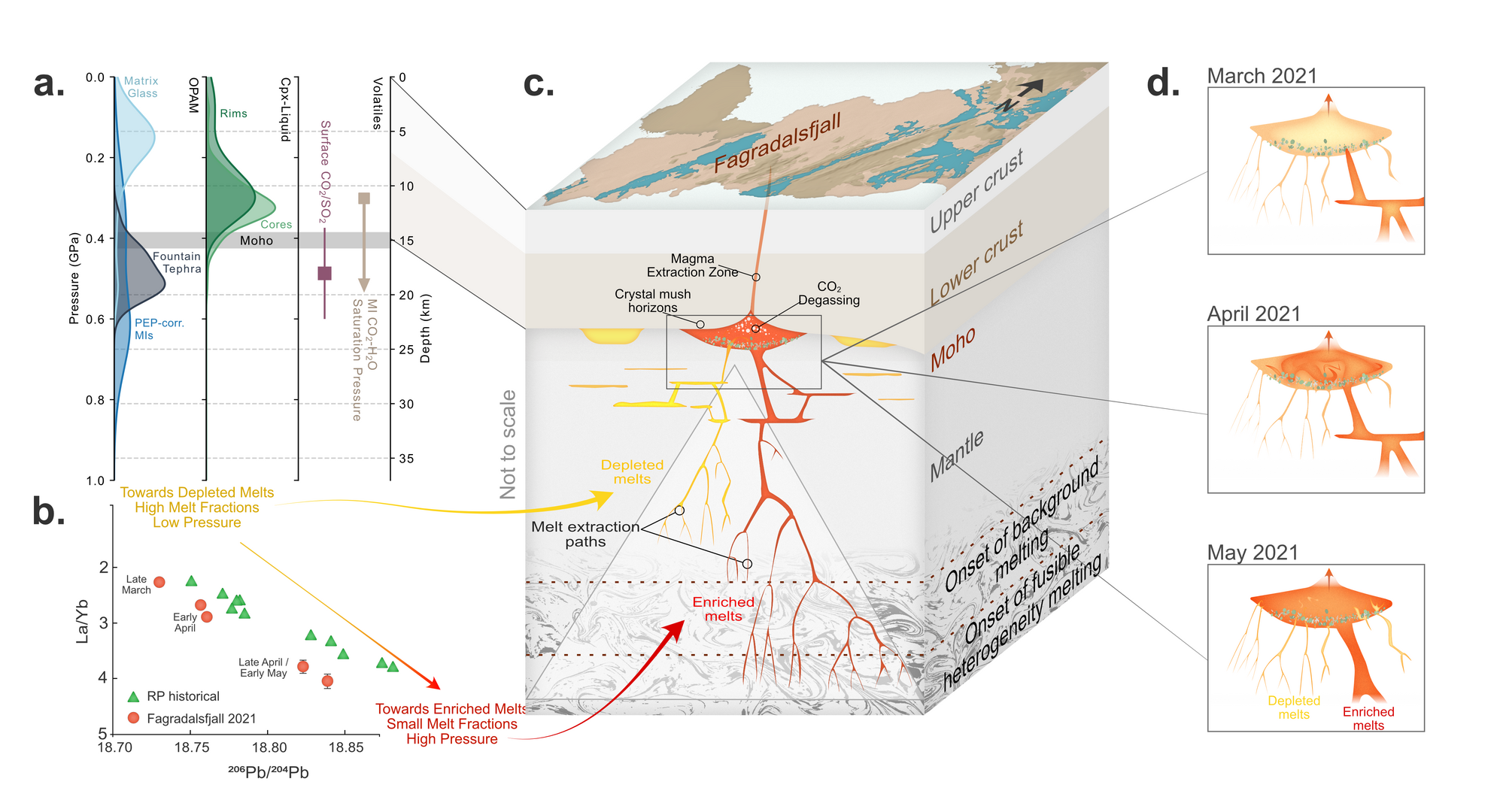 Conceptual model for the processes occurring beneath the Fagradalsfjall volcano. The magma in this eruption was sourced from a reservoir at the crust-mantle boundary, around 15 km from the surface. The magma was generated in the mantle by the mixing of melts underneath Reykjanes Peninsula. In the reservoir, the magma crystallized, cooled, and degassed. The Fagradalsfjall eruption provided a unique opportunity to observe magma accumulation and mixing in real time.

The scientists point out that it has long been argued that different kinds of magma can mix deep in magmatic systems before an eruption, but this study presents real-time evidence that these processes do occur. Furthermore, changes to the composition of volcanic products show that new magma can flow into a deep reservoir rapidly, in a timescale of around 20 days, mixing with the magma already in the reservoir and potentially triggering the eruption. These findings may aid our understanding of volcanoes and the geochemistry of the mantle and could support the development of models of magmatic systems all over the world.

It is extremely unusual to see two papers from scientists in Iceland published in the same issue of Nature, since it is a very competitive outlet that maintains remarkably rigorous academic standards. This achievement therefore highlights the extremely strong position of earth science research in Iceland in an international context.

The two papers can be accessed on the Nature website: 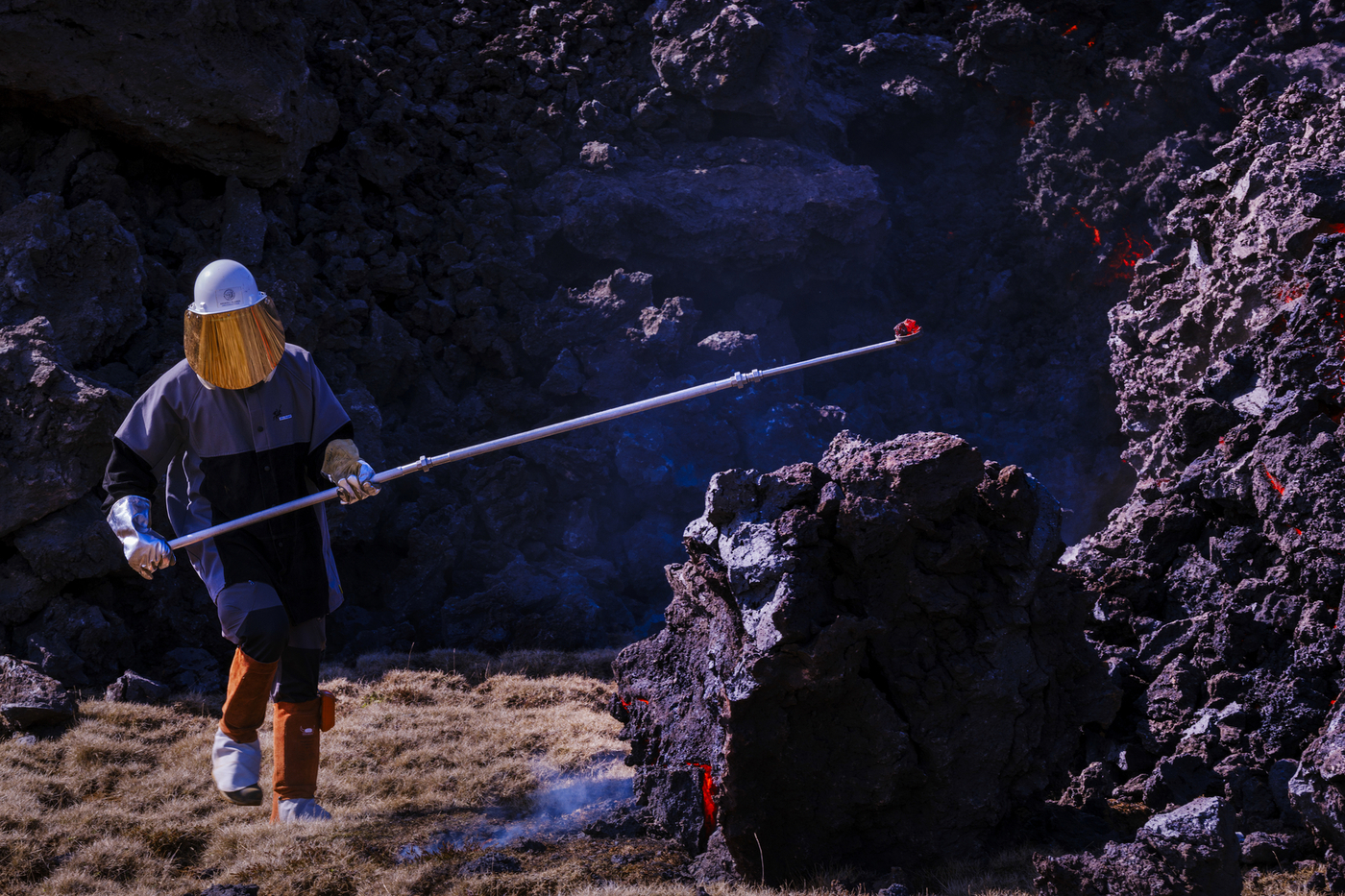