The Icelandic Rembrandt at the University of Iceland

Þrándur Þórarinsson, MA student at the Faculty of Icelandic and Comparative Cultural Studies

"I am in the MA programme art history and theory, a programme attended by fairly few students. Everything surrounding the programme is fairly relaxed and the people are nice," says the artist Þrándur Þórarinsson who is currently on his second MA programme at the University of Iceland.

For those who do not know art history and theory, it is designed to provide knowledge in the history of art, visual culture and trains the students in understanding, analysing, and interpreting works of art from different eras and different cultures. Þrándur is right at home in his studies as he is an educated artist, and quite prolific in the field. Þrándur studied with the Norwegian artist Odd Nedrum from 2003 to 2006; preparatory and fine arts at the Iceland Academy of the Arts, as well as studying at the Akureyri School of Visual Arts.

"Inspiration can strike at any time in any situation. Without warning," says Þrándur, when asked whether his studies at the University of Iceland have in any way influenced his artistic take. 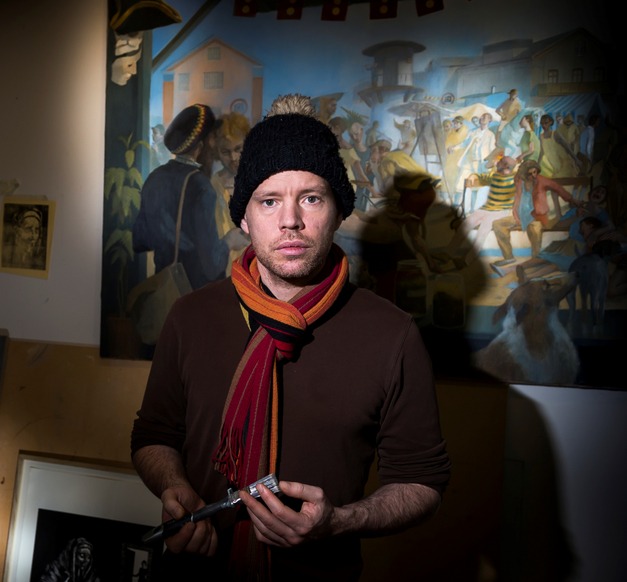 Þrándur is born in 1978 and has received significant attention for his paintings – but they are very different from those of his peers. Þrándur paints under the influence of nationalist romanticism, baroque and renaissance; with pencil strokes in line with the Dutch painter Rembrandt in the seventeenth century.  His subject matters are far from modern as his inspiration is the hidden world of Icelandic folklore, mythical creatures and literature which he stages in the harsh modern reality; thus combining the old and the new. The result is riveting opposites in unusually sophisticated works of art that could just as well have been painted in the middle of the eighteenth century - except for the woman in the national costume holding a filtered cigarette between her long fingers.

"Inspiration can strike at any time in any situation. Without warning," says Þrándur, when asked whether his studies at the University of Iceland have in any way influenced his artistic take.

Þrándur completed a Master's degree in philosophy from the University of Iceland in spring 2016. "Philosophy has first and foremost stimulated the spirit. In my philosophy studies I dealt a lot with political philosophy and ethical ideas, especially in connection with refugees. These speculations have not yet come into my paintings," says Þrándur.

He took a part of his philosophy studied at the University of Copenhagen and was extremely happy to be able to do exchange studies. "I find it ideal for students to use the opportunity to take part of their studies abroad. It is good for all students, especially those dealing with humanities."

Þrándur enjoys his studies and says curiosity the driving force for his third university degree in a short period of time. Maybe the University of Iceland Art Collection will one day have a painting by its students, but the museum was founded in 1980 after gift of artworks from Sverrir Sigurðsson and Ingibjörg Guðmundsdóttir.