Most people try to avoid pathogens as much as possible, since they generally cause health problems and even serious epidemics. History shows us this very plainly. The obvious example to demonstrate how serious infectious diseases can be is the COVID-19 pandemic currently raging.

Karl Gústaf Kristinsson, professor at the University of Iceland Faculty of Medicine, is a little different from most other people when it comes to pathogens. He is in fact fascinated by some of them, not least pneumococcus and streptococcus as well as E. coli. Karl Gústaf heads the Department of Clinical Microbiology at Landspítali University Hospital and is therefore primarily interested in resolving the health problems caused by pathogens, both bacteria and viruses.

Karl Gústaf's diverse research is focused in particular on the spread of and risk factors for antibiotic resistance, which is a growing problem now threatening public health. Karl Gústaf has also researched the impact of vaccinations on pathogens, both bacteria and viruses.

In his recent research, Karl Gústaf has looked for Enterobasterales bacteria in vegetables on the Icelandic market, especially Escherichia coli or E. coli, which has often been discussed in the media. He wants to investigate the sensitivity of these bacteria to antibiotics and see whether there is a difference between the bacteria living in domestically grown and imported vegetables. To achieve this, he is sequencing the DNA from the E. coli bacteria he finds and comparing them with strains cultivated from urinary tract infections in humans.

"This study is part of a larger project in which we are cultivating E. coli from humans with urinary tract infections, animals, food projects and the environment," says Karl Kristinsson. 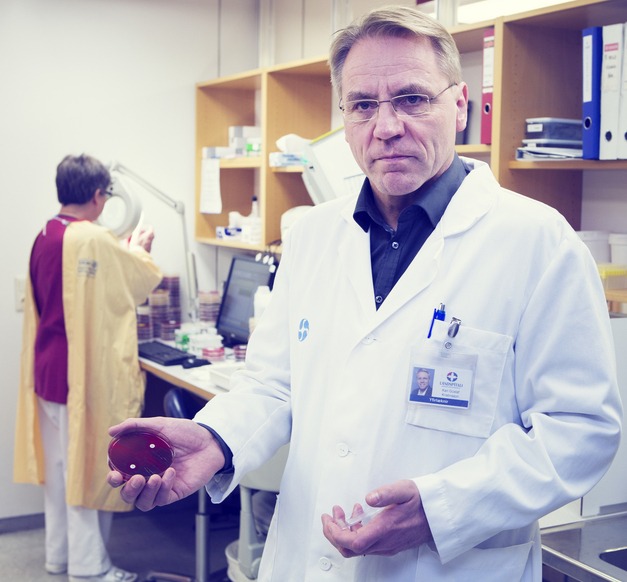 But why is E. coli so dangerous?  The bacteria produces a certain kind of toxin which causes illness in the host, in this case humans. Such infections have not been a huge problem here in Iceland, but there have been many cases in neighbouring countries. One of the main symptoms is diarrhoea and vomiting but in some cases, there are very serious complications which can be life threatening.

"This study is part of a larger project in which we are cultivating E. coli from humans with urinary tract infections, animals, food projects and the environment. The DNA will be sequenced and compared in order to determine how closely related the strains are and evaluate what proportion of the E. coli bacteria that cause UTIs come from food products, animals and the environment. Also, whether certain genes are linked to certain species of animal," says Karl.

This project is a collaboration between the Department of Clinical Microbiology at the Landspítali University Hospital, the University of Iceland Institute for Experimental Pathology at Keldur, MATÍS, MAST, and George Washington University in the USA.

Karl Gústaf says that very few samples have been positive for E. coli in the study, but some have contained harmless bacteria of the same genus (Enterobacterales). So this isn't the end of the matter, since antibiotic resistance can be passed on by gene transfer to harmful bacteria.

"Such resistance was identified in bacteria in salad, and it was more common in imported salad. Too few E. coli strains were identified to enable us to look at the relationship between them and UTIs in humans."