Rúna Sif Stefánsdóttir defends her PhD thesis in Sport and Health Science from the Faculty of Health Promotion, Sport and Leisure Studies, University of Iceland:

The oral defence takes place Wednesday, March 9, at 1 pm in the Aula in the main building of the University of Iceland, as well as in live stream.

Dr Ársæll Arnarsson Head of the Faculty of Health Promotion, Sport and Leisure Studies will conduct the ceremony.

The doctoral project is part of a larger project entitled “Heilsuhegðun Ungra Íslendinga” or “Health behavior of Icelandic youth” that took place during spring 2015 and early 2017. The project tracked the status and changes of various health and sleep parameters in the cohort born in 1999 as previous research has shown that adequate sleep during adolescence is vital, and that short and insufficient sleep can affect mental and physical health. Furthermore, short sleep has been shown to have a negative effect on academic achievement and cognitive function. Despite strong evidence of the detrimental effects of inadequate sleep on health, there is a lack of studies that measure sleep objectively. Therefore, the overall aim of this dissertation was to use objective measures to quantify the free-living sleep of Icelandic adolescents at ages 15 and 17, as they transition from compulsory to secondary education, and to determine whether their sleep patterns are associated with academic and cognitive outcomes.

The research sample came from six primary schools in Reykjavík. Data were collected in the spring of 2015, when students were in 10th grade and then two years later, when they were in their second year of upper secondary school. Data could be linked for 145 students at both time points. Sleep was measured over one week with an actigraph accelerometer located on the wrist. In the first data collection (2015), the average grade in standardized exams in Icelandic, mathematics and English was used as a measure of academic achievement. Two years later, cognitive activity was measured by an n-back memory test and a Posner cue-target attention test.

The main results of the study are that Icelandic adolescents go to bed late (00:43 age of 15, 01:12 age 17) and the total sleep time is short (6.6 ± 0.7 hours/night age 15 and 6, 2 ± 0.7 hours/night age 17). Furthermore, variability in sleep is high at both time points. Thus, during the two year change from age 15 to age 17, students sleep duration decreased, night-to-night variability in sleep duration increased, and students went to bed 29 min/night later. Cross-sectional regression of the data collected at age 15 in those with standardized exam scores demonstrated that both bedtime and night-to-night variability in total sleep time were negatively associated with the average score across all topics. Similarly, cross-sectional analysis of students who underwent cognitive function testing at age 17 showed that time in bed the night before cognitive testing was negatively associated with response times during the most challenging memory task. In general, Icelandic students go to bed late and have short and inconsistent sleep schedules at both age 15 and age 17. Further, results at age 15 show that sleep quality and bedtime affect academic performance, and sleep appears to affect cognitive performance in 17-year-olds.

Rúna Sif Stefánsdóttir was born in Reykjavík in 1989. She graduated as a teacher of biology (B.Ed) from St. John´s University, New York, in 2012 and MPH in Public Health Sciences from the University of Iceland. Rúna is an adjunct at the Department of Health Promotion, Sports and Leisure at the School of Education at the University of Iceland. Rúna's parents are Erla Gunnarsdóttir, a sports scientist, and Stefán Stefánsson, master installer. Rúna's husband is Pablo Punyed, a football player and student, and they live in Grafarvogur with their daughter, Elísabet Erla (2019). Rúna's hobbies are sleep, exercise, hiking, food, travel and she enjoys herself surrounded by her family and friends.

Associations between objectively measured sleep and cognition in older Icelandic adolescents Rúna Sif Stefánsdóttir defends her PhD thesis in Sport and Health Science from the Faculty of Health Promotion, Sport and Leisure Studies, University of Iceland: 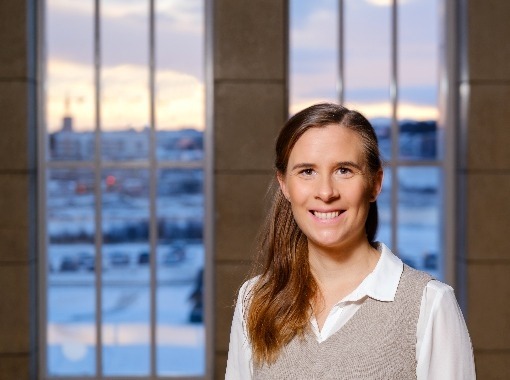