Chair of Ceremony: Dr. Oddur Ingólfsson, Professor and Vice Head of the Faculty of Physical Sciences at the University of Iceland

Abstract:
Dynamic nuclear polarization (DNP) has emerged as an important technique to enhance the signal intensity of nuclear magnetic resonance (NMR) spectroscopy by transferring spin polarization from unpaired electrons to nuclei of interest. Stable carbon-based organic radicals, such as trityl and 1,3-bisdiphenylene-2-phenylallyl (BDPA), are very promising polarizing agents for DNP at high field. BDPA has the advantage that it is easier to synthesize than trityl, but its lack of solubility in aqueous media limits their application for structural studies of biomolecules. The PhD thesis describes the design and synthesis of BDPA radicals that are soluble in aqueous media and have improved persistence. In the first part, new phosphoester-derived BDPA radicals are described. Unexpectedly, these BDPA radicals, and BDPA radicals in general, were found to have limited persistence. Therefore, the effects of various factors on the persistence were investigated. Decomposition in the solid state was found to be due to oxidation while dimer formation is a significant pathway of degradation in solution. In the second part, the design and synthesis of a new class of BDPA radicals is described. The radicals contain four alkyl/aryl-ammonium groups and are soluble in aqueous solutions. More importantly, they are highly persistent due to reduced decomposition via dimerization. Furthermore, three water-soluble BDPA-nitroxide biradicals were synthesized as new polarizing agents for DNP, using different linkers to optimize the spin-spin interaction between the two radical centers. These biradicals hold significant potential as polarizing agents for investigation of biomolecules by DNP NMR spectroscopy at high magnetic fields.

About the doctoral candidate: Sucharita Mandal was born in West Bengal, India. She received a bachelor’s degree in Chemistry from University of Calcutta, Kolkata in 2012 and a Master’s degree in Chemistry from Indian Institute of Technology, Kanpur in 2014. That same year, she moved to Reykjavík and started her doctoral studies under the supervision of Prof. Snorri Þór Sigurðsson. 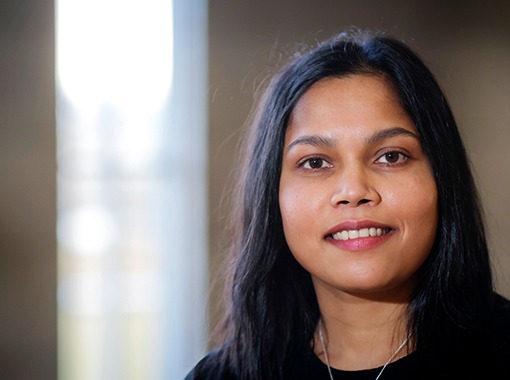