Chair of Ceremony: Dr. Rúnar Unnþórsson, Professor and the Head of the Faculty of Industrial Engineering, Mechanical Engineering and Computer Science, University of Iceland

Abstract
The main target of this thesis is to use density functional theory-based simulations to study electrochemical CO2 and N2 reductions by employing a recent theoretical model of an electrochemical solid-liquid interface. This model is used to investigate the kinetics of such reactions. However, initially, a simple thermochemical model is used to study electrochemical CO2 reduction reaction (CO2RR) on 12 transition metal oxides (TMOs). We utilize models of rutile oxide (110) surfaces to investigate trends and limitations of CO2RR on those TMOs. We construct scaling law based thermodynamic volcano relation for CO2RR. Accordingly, we propose guidelines for hydrogen and OH binding free energy range where low overpotentials and high selectivity are predicted for CO2RR using certain oxides. Therefore, this provides guidance to future development of oxide catalysts for CO2RR.

To get more insight into CO2RR on TMOs more detailed calculations are required which take into account the kinetics involved of various possible branching paths and towards different products. Since such calculations are computationally demanding we focus on the RuO2(110) surface where most experiments have been reported. ab initio molecular dynamic simulations at room temperature and total energy calculations are used to improve the model system and methodology for CO2RR on RuO2(110) by including both explicit solvation effects and calculate proton-electron transfer energy barriers to elucidate the reaction mechanism towards various products; methanol, methane, CO(g), formic acid, methanediol and hydrogen. A significant difference in energy barriers towards methane and methanol is observed. The formation and role of CO as a spectator species is justified. We conclude that hydrogen is the main product at the potential range of -0.2 V to -0.9 V which is in agreement with recent experimental results. The calculated overpotential for methanol formation is found to be around -1 V. Furthermore, the calculations show why RuO2 also catalyzes CO2RR towards formic acid and CO(g) in a trace amount, in agreement with experimental observations.

Finally, the possibility of synthesizing ammonia electrochemically is explored. Density functional theory calculations are used to elucidate the mechanism of the nitrogen reduction reaction (NRR) in an electrochemical double layer on the Ru(0001) electrode. The first protonation step of N2 to NNH is found to be the potential limiting step in agreement with thermodynamic calculations and the additional proton-electron transfer barrier is neglectable. The optimal mechanism of NRR towards ammonia on Ru(0001) follows an associative mechanism where after the third proton−electron transfer, the N−N bond is broken in N−NH3, releasing the first NH3 molecule and leaving N adsorbed on the surface. We find that this detailed kinetic study using a realistic model of the electrochemical solid-liquid interface predicts quiet similar reaction pathway as previously reported using the simple thermochemical model.

About the doctoral candidate
Ebrahim Tayyebi started his bachelor’s degree in chemical engineering (Refining Industries) at Arak University, Arak, Iran in 2005 and he graduated in 2009. During his bachelor studies he worked with Professor Mostafa Keshavarz Moraveji to study the effect of temperature, pressure, and different surfactants on the formation of gas hydrates in water. Soon after his BS studies he entered Amirkabir University of Technology, Tehran, Iran as a master student in chemical engineering (Nanotechnology) and worked with Professor Hamid Modarress. There, he studied physico-chemical properties of solid-fluid interface from nano-metrical viewpoint. Ebrahim completed his master's degree in 2012. In 2016 he joined Prof. Egill Skulason’s group as a Ph.D. student. In his Ph.D. studies he has been performing quantum mechanical simulations to investigate reaction mechanisms for CO2 and N2 reduction reactions. 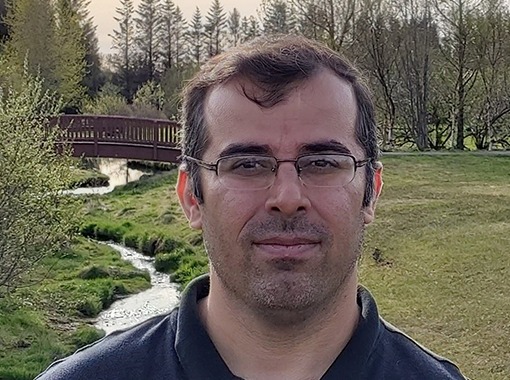