Most people who take a walk along the coast in Iceland will spot eider ducks swimming close to the shore. Eider ducks are large diving ducks, the most common species of duck in Iceland. This has been a boon for Icelanders, since eiderdown has been a valuable resource for centuries.

But eider ducks are not only seen along the shoreline; they can also be found in novels and poetry.  The Nobel Prize winning author Halldór Laxness gave Úa, one of his most colourful female characters, a name referencing the call of the eider duck. "It is a word from the eiderducks at home; they taught me to understand life," says Úa herself in Under the Glacier, a novel set on Snæfellsnes peninsula. And this is precisely the area in which Jón Einar Jónsson, research scientist at the University of Iceland, works.

"The Snæfellsnes Research Centre was founded in 2006 and eider ducks have always been the main species we are researching," says Jón Einar. "People in the Breiðafjörður region and further afield are extremely interested in the fate of the eider duck. Many people who gather eiderdown have contributed knowledge, data and information that has directly aided us in our research,"

Jón Einar's postgraduate studies focused on population ecology and behaviour in ducks, meaning that the most common species of duck in Iceland is an excellent subject for him. He became excited as soon as he saw the research in the islands in Breiðafjörður fjord.  The people there proved keen to collaborate on the research and have allowed all kinds of research activity in the nesting grounds, as well as tagging of the female eider ducks.

"My work at the Research Centre is first and foremost focused on the population ecology of the eider duck, for example by investigating the survival rates of nesting birds, movement of nests between years, diet, and the impact of the weather on population size and habitat choice," says Jón Einar.

Eider ducks have long been happy to live in close proximity to humans, since humans have benefited from protecting nesting birds in order to gather the eiderdown.  "The eider duck is therefore a very handy species to research," says Jón Einar, "and here I'm referring to the condition of individuals, nesting success, physiological factors and behaviour. The internal relationships between these factors are also very exciting."

"I would like to research the eider duck's settlement of Iceland based on data on size variation and genetic links to other eider duck populations. I am also extremely interested in variations in nesting time and how individuals time their egg laying."

"The opportunity to tag eider ducks came when we became involved with the Seatrack project in 2014. This project is based on putting location trackers on the birds and retrieving them a year later. Leading on from that experience, we started using coloured tags on the birds the next year and every year we capture between one and two hundred ducks. The Seatrack project is managed from Norway, covers 11 species of seabird and will continue until at least 2022."

The results that Jón Einar is currently recording are connected to a long-term annual project monitoring tagged female eider ducks. Through annual tagging, researchers observe the behaviour of female eider ducks on the south side of Breiðafjörður.

"The goal is to investigate whether the female ducks move between islands, i.e. show different breeding ground fidelity between islands and years, to explain individual variation in choice of nesting site and nesting success. We also want to compare nesting success, date of egg laying and incubation periods between the islands, which vary in terrain, vegetation, predators and other nesting species that affect the security of the female eider ducks. We also want to investigate whether nest fidelity increases with age in the tagged female birds."

"Birds are one of the best ways we have to monitor how the environment is changing and how animals adapt to that. We are living in a time when people wantonly squander natural resources, but at the same time say they want to protect nature. Eider ducks are now on watchlists, both Icelandic and international, after their numbers began to decline significantly after the turn of the century. This study seeks to explain variations between individuals and what consequences that variability has for the ducks' offspring and nesting success," says Jón Einar Jónsson, director at the Research Centre at Snæfellsnes. 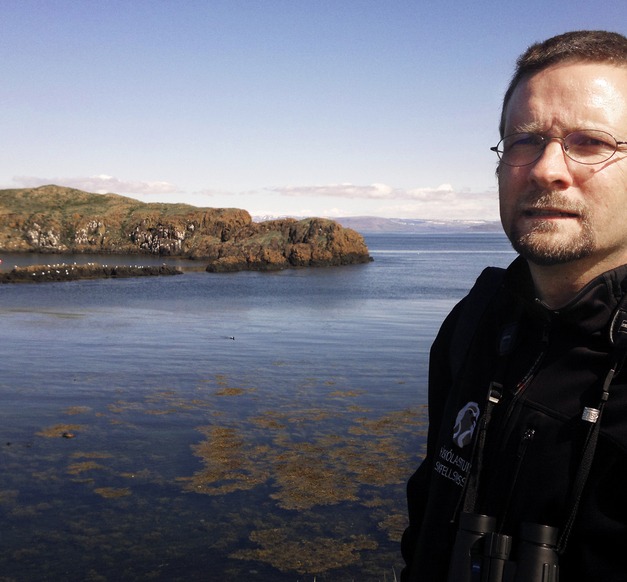 The eider duck is now on watchlists

Since this is a long-term study, there are no final results, but Jón Einar and his colleagues hope to be able to map how often and why female eider ducks change nesting site and how they select a nesting site.

"Birds are one of the best ways we have to monitor how the environment is changing and how animals adapt to that. We are living in a time when people wantonly squander natural resources, but at the same time say they want to protect nature. Eider ducks are now on watchlists, both Icelandic and international, after their numbers began to decline significantly after the turn of the century. This study seeks to explain variations between individuals and what consequences that variability has for the ducks' offspring and nesting success."

Jón Einar says that the research is also valuable for society, since Icelanders are generally interested in the fate of birds.  "In this case, there is also a lot of interest from people who collect eiderdown. An awful lot of people have some connection to that world through family members or acquaintances."

Birds are dear to the people of Iceland, perhaps in part due to the seemingly supernatural power they have to defy gravity and fly. Thus for many people, they are a symbol of freedom. They are also heralds of the long-awaited spring. "The plover has come to sing away the snow," wrote the poet Páll Ólafsson.

And research into birds is also very important. "The importance of bird research is obvious if you think about the fact that birds are everywhere, on every continent and in every habitat. They play a key role in any ecosystem and our understanding of ecosystems is based in large part on bird research. For people, birds have an artistic, religious and entertainment value," says Jón Einar.

"Birds are particularly important in Iceland and represent a large part of Icelandic nature, since our fauna is otherwise modest. People's interest in birds has grown enormously in recent years, but there are still relatively few people conducting research. We have obligations toward Icelandic nature and the gathering of knowledge is one of them. Research and sharing knowledge are important to maintain awareness of nature and thereby sensible protections and use of resources."