"Once the COVID-19 epidemic broke out many realised that traditional statistics could not ensure timely and informed decision making. All around the world there is a cry for better reasoning to support the disease prevention and economic measures taken, and their interactions. Such reasoning calls for good and timely data. We thought it thus important to study the data access in Iceland, compare it to other countries and at the same time compare the status of the reactive measures and consequences of COVID-19." This says Þórhildur Jetzek, assistant professor at the University of Iceland Faculty of Economics, on a study that she has been working on for the past few months with the economy student Erla Björk Sigurðardóttir. The study is in relation to the extensive impact the corona virus pandemic has had on the world economy.

Þórhildur says that the aim of the research project is twofold. "On the one hand to gather information and data on the economic measures taken in Iceland and its neighbouring countries Denmark and Sweden to COVID-19, and the economic status in the wake of the first wave of the epidemic. The former goal was thus to increase understanding on the measures and impact of COVID-19 in Iceland compared to other countries. Secondly, to evaluate the amount, quality, and accessibility of data in Iceland compared to the other two countries and at the same time to map where we can do better in the communication of data and therefore contribute to informed decision making," she says.

Data one of the most valuable modern resources

Þórhildur has extensive experience in research on the importance of good and accessible data; among other things to support informed decision making. She says it is vital to have diverse data at hand when needed, and that they are presented in a way that they can be used for a variety of analyses with as open access as possible. "Then you can make the most of the available data; one of the most valuable resources of our times," she points out.

Erla Björk worked on the project this summer with the assistance of the Student Innovation Fund and her assignments included searching for data on government measures to stop the spread of COVID-19, economic counter measures and status of the economy both here in Iceland and in the two comparison countries. "Concurrently we documented access to the data, whether any was missing and how easy or hard it was to use the data for analysis. We used a template based on international research on the status of open data.  We interviewed ten large users of statistics in Iceland, a diverse group, and our interlocutors answered question regarding the data they most used in their own analysis. The interview results were then put in perspective with the results of a study on data access and research findings from former studies," explains Erla Björk.

Þórhildur Jetzek, assistant professor at the University of Iceland Faculty of Economics, has been working on a study for the past few months with the economy student Erla Björk Sigurðardóttir. The study is in relation to the extensive impact the corona virus pandemic has had on the world economy. IMAGE/Kristinn Ingvarsson 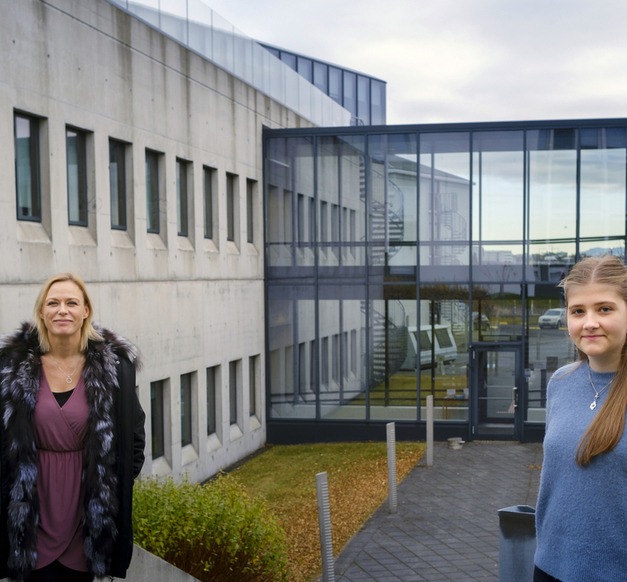 Mortality rate higher in Sweden but the economic effect similar

As reflected in the media the Swedish approach to the pandemic has been quite different from the reactions in the other Nordic countries. "The response of the Icelandic government was very similar to the Danish one, but the Swedish authorities reacted differently and did not enforce as many restrictions. When the report was written the mortality rate in Sweden due to COVID-19 was considerably higher, but the economic repercussions were nonetheless comparable with Iceland and Denmark," says Þórhildur on the research results. She, however, emphasizes that these are short-term results which do not predict the long-term effect of the pandemic.

"Official statistics here in Iceland and in the two other countries are comparable as far as access, timeliness, and quality. There are, however, more customised COVID-19 related data publications in the neighbouring countries, where various new data, such as survey results on the expectations of companies and price changes in retail following the pandemic, were published regularly from the beginning of the epidemic. The experimental statistics from Statistics Iceland was very helpful, but it was suspended during the summer and thus not useful when writing the report at the end of this summer," adds Erla Björk.

The corona pandemic is not over yet, by far, and many questions regarding its impact remain unanswered. It is certain that research scientists from diverse fields of study will have ample research material in analysing the epidemic and its impact for years to come, but Þórhildur points out that it is also important to write history while it is in the making. "We wanted to draw attention to timely, extensive and formulated open access data in our study.  We hope that our study will have the effect that increased emphasis be placed on allowing invested parties in Iceland open access to the data that is already being gathered; that quality of data and processing will be improved, and that new high frequency data be published; i.e. data that is gathered weekly or even daily. This would, in our opinion, prove useful to the authorities, scientists, and companies in providing better analysis, better reaction and response time to new developments; making it possible for all of us to learn from these unprecedented times."