A warming climate will have a positive impact on the productivity of lake trout in the northernmost regions of Canada, at least in the short run. This will appear in faster growth and the trout spreading to more lakes in the area. This has been established in extensive research by scientists that has been ongoing for 15 years, involving a great number of lakes that have not been studied like this before. These conclusions are discussed in an article in the latest issue of the scientific journal Nature Climate Change. Steven Campana, Professor in the Faculty of Life and Environmental Sciences at the University of Iceland, was the first author.

Canadian by birth, Steven Campana has been working at the University of Iceland for the last five years. Along with Canadian and American colleagues he has studied lakes in the remote northern regions of Canada; 2000 km. north of Toronto. “To call these lakes remote is an understatement; we were 200 km from the nearest person. This area is home to the musk ox, reindeer, foxes and wolves – regular visitors at our camps,” says Steven and adds that “it appears likely that the researchers were the first human beings to have ever visited the lakes. Ever.”

These lakes are home to a species of trout that can grow up to a metre in length and reach weights of up to 35 kg. These fish are closely related to the Arctic char, found all over the Arctic, for example in Icelandic lakes. These lakes are mostly unfished, due to their extreme remoteness. This will probably change as the climate warms. The scientists fear that the trout will be very sensitive to overfishing because they grow very slowly.

Trout can become up to 65 years old

The research has been going on for fifteen years, and during that time the group caught and measured 4.600 trout from 55 lakes. “We used small inflatable boats and nets to catch the trout. The trout were both larger in size and numbers than in lakes further south,” says Steven

Special emphasis was placed on studying otoliths, found in the skulls of fish. The otoliths form rings indicating age. “The otoliths from the lake trout showed they can become up to 65 years old, much older than in fish in lakes further south, or in lakes that are more intensely fished,” Steven points out, but determining the age of fish is one of his areas of expertise.

“To call these lakes remote is an understatement; we were 200 km from the nearest person. This area is home to the musk ox, reindeer, foxes and wolves – regular visitors at our camps,” says Steven and adds that “it appears likely that the researchers were the first human beings to have ever visited the lakes. Ever.” 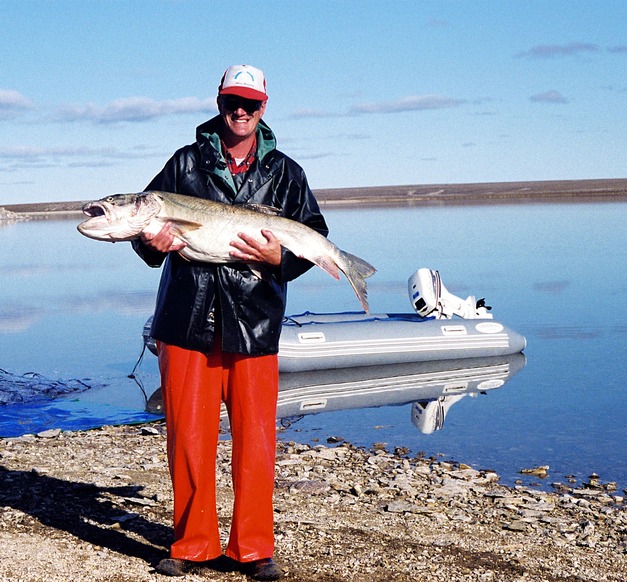 An enormous number of lakes can be found in the north of Canada. To try to estimate how many of them would be habitable for trout, the scientists used satellite images of the area, comparable to those used by Google Earth, and developed a computer model to count and characterize the lakes. There turned out to be 7.2 million lakes in total. “Most of these lakes are too shallow for fish to thrive in them because they freeze right through to the bottom of the lake in winter. We discovered 481,784 lakes that are viable for fish,” says Steven. This number accounts for 34% of all of the lakes in the world. The research furthermore showed that the average size of lakes in the area is 21 ha, the average depth 2.5 m, and the average temperature 1.5° Celsius.

As the climate gets warmer, so will the lakes. This means that the trout will grow faster, and die younger. “The growth of the trout according to our results will increase by around 20% to the year 2050, and as the Earth’s temperature continues to rise an additional 30,000 lakes will become habitable for the tout. The number and growth rate of the trout in north Canada will increase by around 29% in the period, according to our calculations,” says Steven. It is likely that the trout will colonize new lakes during seasonal flooding, and by birds carrying trout eggs. Steven points out that because of the generally slow growth of the species, commercial fishing in the area would not prove sustainable.

“These conclusions that the Arctic lake trout will prosper under climate change are a welcome change from many other parts of the world, where fish and animal populations are declining due to climate change,” Steven concludes.