At the Centre of Public Health Sciences, both local and international researchers conduct world-class research in cooperation with colleagues around the world. The centre's objective is to be among the world's top research institutes in public health sciences, and continue to publish its findings in various peer-reviewed journals from around the world.

The Stress and Gene Analysis Cohort (Saga Cohort).The Saga Cohort is world-wide one of the largest studies ever conducted on the role of trauma in women’s health. Its’ objective is to generate new knowledge on the prevalence of various trauma and violence among women in Iceland, the link between trauma and various health outcomes and the potential genetic underpinnings of varying trajectories of health after exposure to such trauma. The target population was all Icelandic-speaking women, 18-69 years old, who resided in Iceland in February 2018. The first wave of the data collection started in March 2018 and finished July 1st, 2019 with around 32 000 women in Iceland registered (almost 1/3 of the target population). Participants answered an extensive web-based questionnaire on trauma history and various health indicators, and will then be prospectively followed for diagnoses of major physical diseases and mental disorders. The project is conducted in collaboration with Decode Genetics entailing genetic data for a large proportion of the population. The study’s principal investigator is Unnur Anna Valdimarsdóttir, professor at our program. The study is funded by grants from the European Research Council and The Icelandic Centre for Research.

NorPreSS (Nordic Pregnancy Drug Safety Studies). A group of researchers from all of the Nordic countries and the United States has received roughly 130 million ISK grant from NordForsk to study the effects of drug treatments during pregnancy and its effect on birth outcomes and child development, including success in school. In addition, the study researches what health effects quitting the drug treatment has on the mother. Onboard the team of scientists are numerous researchers from the Centre of Public Health Sciences, led by Professor Helga Zoéga.

The Lung Cancer Stress and Survival Study (LUCASS)
This research project is funded by The Icelandic Centre for Research and includes an extensive data collection through questionnaires, stress-biomarkers and tumor tissue collection from 170 patients diagnosed with lung cancer. The aim of the study is to address the role of the psycho-biological stress-response to a lung cancer diagnosis in lung cancer progression and survival. Unnur Valdimarsdóttir, professor, Hrönn Harðardóttir, pulmonologist, and Ph.D. student, lead the project which is conducted in collaboration with the National University Hospital (Landsspítali-Háskólasjúkrahús), and scientists from the Faculty of Medicine at the University of Iceland, Harvard School of Public Health, Reykjavik University, Karolinska Institutet, TU Dresden, and Örebro Universitet.

A newly-funded multicenter Horizon 2020 project (Principal Investigator Ole Andreassen, University of Oslo) with the principal aim of characterizing the epidemiological and genetic association between psychiatric disorders and cardiovascular disease. Professor Unnur Valdimarsdóttir is a co-investigator in this project with CPHS as one of the study centers.

The Centre of Public Health Sciences works in close conjunction with various organizations and educational institutions, both in Iceland and abroad.

In Iceland, the centre collaborates with The National University Hospital of Iceland, The Icelandic Heart Association, The Icelandic Cancer Society, and The Directorate of Health. These institutions play a pivotal role in preventive measures and health-related data collection in Iceland, the data being instrumental for research. Specialists from these institutions are involved with teaching and guidance for our students, which in turn opens up venues for students to conduct their research in collaboration with the specialists and their entities.

Educational institutes are also heavily involved with the centre's research and teachings, such as Harvard School of Public Health, Karolinska Institutet, and the University of Minnesota. Guest lecturers from these schools frequently teach and conduct seminars for our students, in addition to serving on their thesis committees. 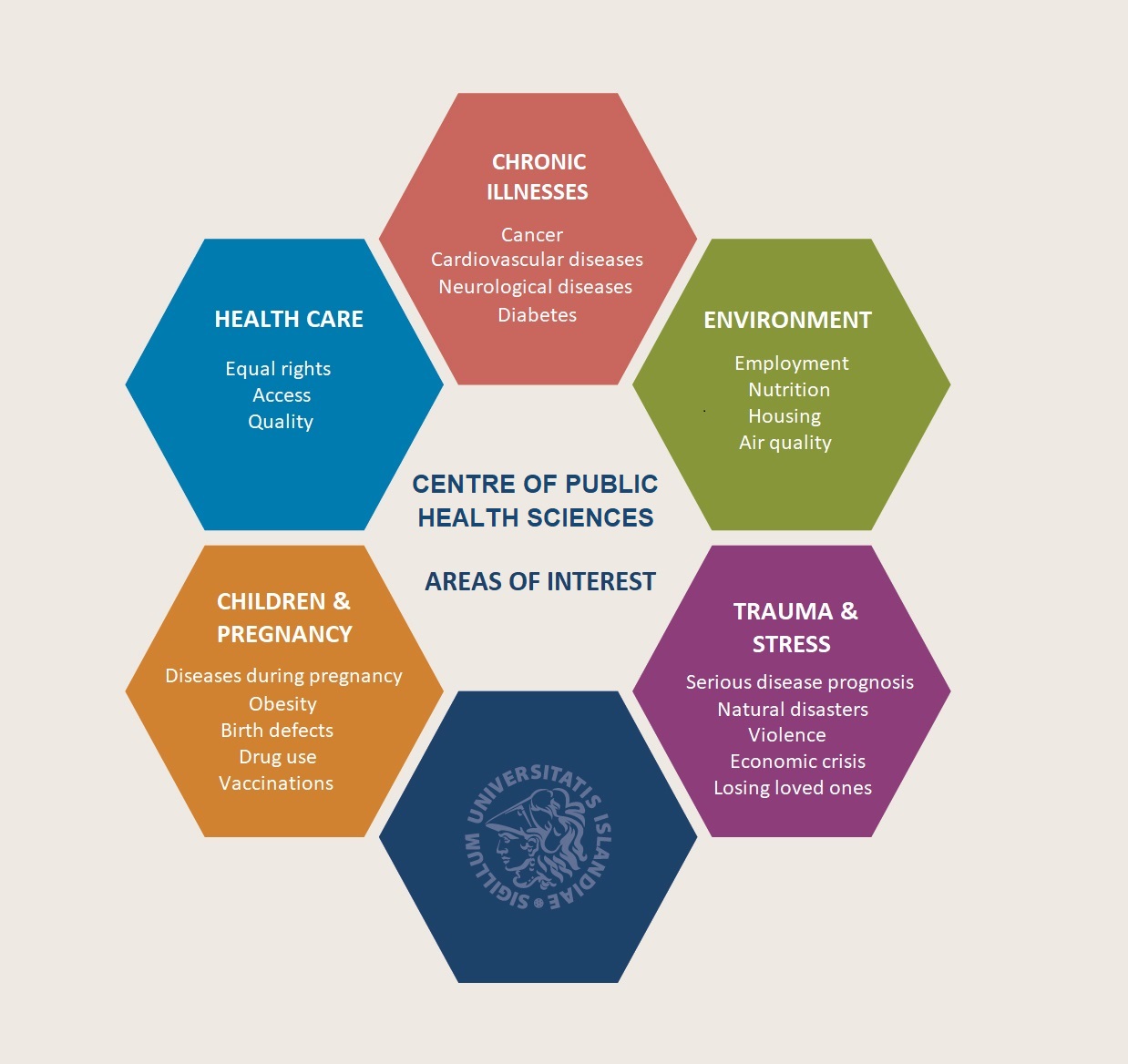 Is this page useful or is something missing?