The University receives a collection of letters - a treasure from the New World | University of Iceland Skip to main content
07/01/2021 - 10:25

The University of Iceland received a generous gift towards the end of last year when Birgir Guðjónsson, MD, gave the University a collection of letters to preserve from the estate of Sigrún Stefánsdóttir (1898-1986) from Eyjardalsá in Bárðardalur. Birgir did this on behalf of his wife, Heiður A. Vigfúsdóttir, but Sigrún was Heiður's mother. The letters give important insight into the experiences of Icelandic settlers in North America, including the family of  Stephan G.  Stephansson (1853-1927), the poet of the Rocky Mountains.

Sigrún was known nationwide in her time as she was in the forefront of promoting handicrafts in Iceland. She was manager of the Icelandic Handicrafts Centre from 1951 to 1967, and continued to work there for over a decade after she retired. The letters are invaluable as documentation and the University of Iceland will ensure their safe keeping with the involvement of the National and University Library.

"Letters from European immigrants in North America in the late nineteenth century and the beginning of the twentieth are of inquestionable value.," says Birna Bjarnadóttir, literary scholar at the University who accepted the letters. "They have moulded our ideas on one of the greatest periods of migration in the history of mankind. The letters, along with other immigrant writings and photographs, lay the foundation for scholars writing biographies or academic works," says Birna who holds the the Stephan G. Stephansson Chair position as literary scholar.  Birna promotes international collaboration on research on immigration in modern literature, and has a key role in furthering collaboration between the University of Iceland and the University of Manitoba in both research and teaching.

Birna says that European writers have also drawn on letters (and other written sources) by European immigrants in North America, and mentions the Icelandic writer Böðvar Guðmundsson and Franz Kafka's America as intriguing examples.

Asked about the letters given to the University of Iceland for safekeeping Birna said that it includes letters from Rósa Sigurlaug Benediktson (1900-1995), the daughter of Stephan G. and Helga Sigríður Jónsdóttir (1859-1940), to her cousin Sigrún Stefánsdóttir. Letters from Sigurbjörg Stefánsdóttir (1823-1904), Stephan G's aunt, from North America to her sister, Guðný Stefánsdóttir (1820-1892), then housewife at Eyjardalsá, the great-grandmother of Heiður A. Vigfúsdóttir, also form part of the gift.

"Birgir wanted to give the letters to the University of Iceland after consulting Stephan Vilberg Benediktsson, Rósa's son. One of the main reasons for the gift is the newly established position in Stephan G. Stephansson name in modern literature and immigrant culture at the University of Iceland Faculty of Languages and Cultures. The position is in memory of Icelandic immigrant poets and writers of North America at the University of Iceland. She adds that Stephan Vilberg, and his wife, Adriana Benediktsson, also supported the position through a founding donation to the endowment fund.  "The fund's goal is to strengthen international research in the field of modern literature and culture of immigrants, with an emphasis on the literary and cultural history of Icelandic immigrants and their descendants in North-America.  Stephan Vilberg's children have also given generous donations to the fund; Susan Rodriguez Abbiati, Paul David Benediktsson, and Stephan Robert Benediktsson.  Other supporters in North -America are Heather Alda, William Ireland, Mooréa and Glen Gray, Donald K. Johnson, Arni Thorsteinsson, and Oskar Sigvaldason," says Birna.

In our efforts to explore the vast experiences in the lives and histories of Icelandic immigrants and their descendants in North-America these letters are invaluable according to Birna. The time span covered by the letters is considerable, or around a century; from 1873 into the 1980s.

"Sigurbjörg Stefánsdóttir's letters to her sister Guðný are from the seventies and eighties in the nineteenth century, and and the ferry us straight into the experience of migration among Icelandic immigrants.  Sigurbjörg's oldest letter to her sister is dated 12 October 1873, in Stoughton, Wisconsin, two months after she left Iceland, and starts with the following words:

I wholeheartedly thank you for our last farewell, and other good things.  It seems to me I am now too far away from you, my best sister, and our dear kinsfolk in Eyjardalsá, and all hope of seeing you again in person in this fleeting life seems lost to me, yet I rejoice in what we have accomplished in the later half of our lives, and it is probably not long to wait until we meet again in the perfect afterlife, and maybe I will also live to see one of your family move West over the vast sea that divides us.

Birna says that Sigurbjörg bade farwell to her life in Iceland in Bárðardalur, on 4 August 1873, and sailed with her husband, Jón Jónsson, and their two children Helga and Jón from Akureyri on the SS Queen.

They were accompanied by Sigurbjörg's brother, Guðmundur Stefánsson, his wife, Guðbjörg Hannesdótttir, and their children Stefán (later Stephan) and Sigurlaug.  The families travelled together to Stoughton Wisconsi and Gardar, North Dakota, and become even closer when Helga Jónsdóttir and Stephan G married.  Stephansson (1853-1927), the poet of the Rocky Mountains. Besides giving insight into the life of Sigurbjörg, her family and other immigrants from the pioneering years of Icelandic settlers in North-America, they show well Sigurbjörg's experience of the transformation.

Birna says that the letters of Rósa Siglaug Benediktsson to Sigrún Stefánsdóttir provide insights into the minds of the descendants of Icelandic immigrants  in North America and their connections with relatives in Iceland.  An interesting feature of the letters is the heritage language use among the children of Icelandic immigrants in North-America.

"Rósa came to Iceland twice, first in 1953, when a statue of Stephan G by Ríkarður Jónsson was inaugurated, and then again in 1974 when Iceland celebrated its millennium as a settled country.   The letters followed the second visit.

Rósa Siglaug was the youngest of Stephan G and Helga's children, and grew up in Markerville, Alberta, Canada.  At nineteen Rósa wished to spread her wings, "and thanks to her mother, Helga, she studied at Olds Agricultural College in Alberta.  In 1928 she married Sigurður Vilberg Benediktsson, moved to his family's farm in the Heckla District in Alberta and had four children,  Helga Iris, Stephan Vilberg, Conrad Benedikt and Sigurd Theodor Olaf."

Birna says that in 1942 they moved to Tindastoll district in Alberta. "In November of that year, half year after the birth of the youngest child, Sigurður Vilberg died," says Birna.  "Rósa did not give up, and was able to successfully raise all her children.  She also led the campaign to make her parents' house in Markerville a public museum under the auspices of the state administration of Alberta.  The opening ceremony for the Stephan G. Stephansson House took place on 10 August 1975. On this occasion  Rósa gave a speech that is printed in the book Looking back Over My Shoulder.  A Memoir by Rosa Siglaug Benediktsson (2008), edited by Mooréu Gray," Birna concludes. 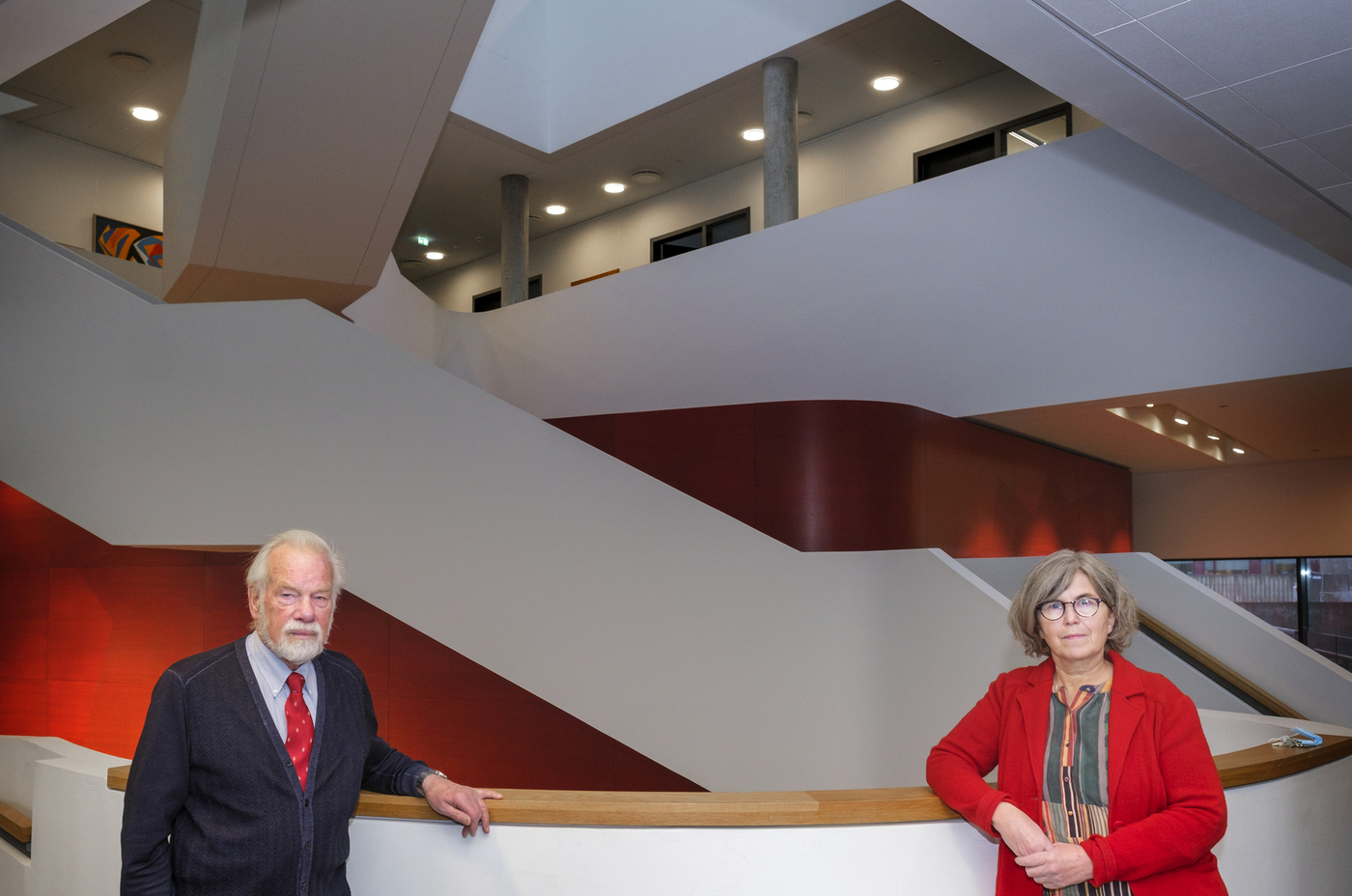