Modelling surface deformation due to magma movements is an important tool to understand subsurface processes at active volcanoes. This PhD project explores how magmatic dykes are influenced by pre-existing fractures and faults, heterogeneous stress fields, and varying material properties, especially in the form of layered crust. Methods from structural geology, numerical models, and analogue models are applied to active and extinct volcanic systems in Iceland. The project is divided into three parts: (a) Basaltic dykes cutting through a caldera-filling hyaloclastite, exposed in the extinct Dyrfjöll volcano in Borgarfjörður eystri, have been mapped using three-dimensional models of three sites in the caldera, created from drone-based photogrammetry. Three types of dyke-fracture interaction are observed: i) Dykes, which are channeled into pre-existing fractures, ii) Dykes which intersect a pre-existing fracture and are not channeled into it, but instead exhibit a change in strike at or near the intersection and iii) one dyke, whose main part was arrested in front of a crosscutting discontinuity, formed numerous thin branches, many of which eventually crossed the initially arresting feature. (b) The Finite Element method is used to construct a model of the 2021 Fagradalsfjall dyke. Preliminary results show that opening driven by pre-existing tectonic stresses can cause surface deformation similar to that caused by dike overpressure, or dislocation opening. Further research will evaluate effects of crustal heterogeneity, and the interplay between magmatic overpressure and heterogeneous stresses due to oblique plate spreading. (c) Analogue models will be used to study inelastic deformation related to dykes propagating through layered materials with varying properties. 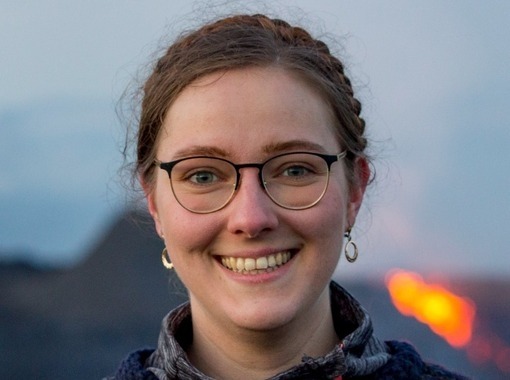