Chair of Ceremony: Dr. Oddur Ingólfsson, Professor at the Faculty of Physical Sciences, University of Iceland

Abstract:
The research described in this thesis is part of a network project involving the growth of metal nanostructures on surfaces of solids, a Horizon 2020 project titled ELENA.

The part of the project described here involved the use of various approaches including density functional theory (DFT), semi-empirical potential functions, and machine learned Gaussian approximation potentials (GAP) for determining the mechanism of adatom migration on surfaces of solids and interlayer transport. Minimum energy paths for the various elementary processes were calculated using the nudged elastic band method in order to identify the transition mechanisms and evaluate the corresponding activation energy. Particular focus was on processes involving the descent of adatoms that land on top of a growing close packed layer on platinum and gold crystals. These are the key transitions determining whether the surface grows layer-by-layer or forms three-dimensional islands. The optimal mechanism for such interlayer transport was identified taking into account the surface morphology, in particular the presence of kinks on the step edges. Also, calculations of Au adatom diffusion on the Si(100) surface were carried out. While exploratory calculations on all these systems were first carried out using semi-empirical potential functions, the principal results presented are based on more accurate DFT calculations that were carried out subsequently using the PBEsol electron density functional.

T  he principal result for the Pt/Pt(111) and Au/Au(111) systems is that downstepping occurs most readily when there is a kink on the step edge, and the preferred mechanism involves a concerted two atom process that places an atom near but not into the kink sites. This is important for explaining the re-entrant layer-by-layer growth which has been experimentally observed previously for Pt(111) growth. The calculations for Au/Au(111) presented here predict similar behavior for the growth of the Au(111) surface. The importance of choosing a single reference point for the energy of the adatom, here chosen to be the adatom on an extended flat surface, is demonstrated. Also, two effects are identified leading to a depletion zone near the step edges, which has previously been observed experimentally.

The calculations of a Au adatom on the Si(100)-2x1 surface reveal an unusual diffusion path. While the optimal binding site is in between the Si dimer rows, as has been deduced previously from experimental measurements, the optimal diffusion path involves the promotion of the adatom to higher energy binding sites on top of a dimer row and then rapid skidding along the row before the adatom drops back down in between dimer rows to a low energy site. As a result, dimers of Au adatoms and possibly larger adatom clusters are predicted to form on top of dimer rows, rather than in between rows. On the basis of the calculations of binding sites and migration paths, kinetic Monte Carlo simulations of long time evolution were carried out and an effective activation energy for diffusion evaluated.

Abid Ali was born in 1990 in Kundha Khahi, Sindh Pakistan, where he grew up with his five brothers and five sisters. He earned his BS degree in Inorganic Chemistry in 2013 from University of Sindh, Jamshoro, Pakistan, and a Master's degree in Computational Chemistry in 2017 from ICCBS University of Karachi, Pakistan. He began his PhD in theoretical chemistry at the University of Iceland in September 2017 and he was a part of Marie Curie, a Horizon 2020 project titled ELENA. 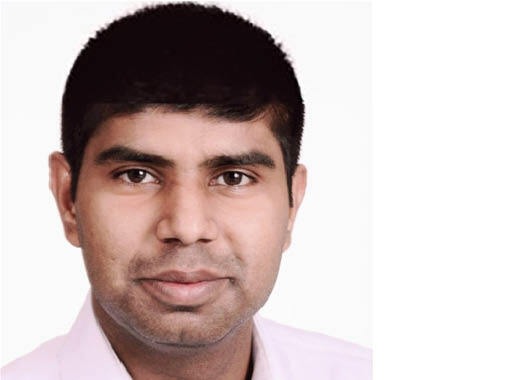